LAWRENCEBURG — Boyle County players should be easier to spot around town this weekend.

The Rebels were laying low a week ago, but they can hold their heads high for a couple of days after getting their first victory of the season Friday night.

It was a convincing win, too, as Boyle hammered Anderson County 41-13 at Hollie Warford Jr. Stadium to put three weeks’ worth of struggles behind it.

The Rebels were smarting after an overtime loss to North Hardin and a lopsided loss to Lafayette, and they were stunned after being blown out by archrival Danville a week ago.

“I didn’t want to show my face in town, it was so bad,” Boyle linebacker Kagen Jackson said. “But this feels great. I can’t wait to get home and celebrate.”

There was much for Boyle (1-3) to celebrate as it defeated Anderson (1-3) for the fourth time in as many years to put the brakes on the Rebels’ worst start since 2007.

“That felt good, didn’t it?” Boyle coach Chuck Smith asked the players on the field following the game.

A few minutes later, Smith said the Rebels needed a game they could feel good about.

“We really did need this in the worst way,” he said. “Those first three games, although they were against good opponents, I think as much as anything it gave our guys some good experience. Tonight we played with a little more confidence and got some things going.”

“It was good just to get back on the horse this week,” Boyle quarterback Sam Tiller said. “We really worked hard in practice, and it’s great to get in the win column and just get something rolling. It’s a good feeling, good for the team.”

Boyle used two quarterbacks and eight receivers to throw for more than 70 percent of its 352 yards of total offense. And its defense allowed Anderson to mount only one serious scoring threat prior to the closing minutes of the game.

“The thing that stuck out to me the most is the guys stepped up and made some plays,” Smith said. “They haven’t been making plays, and they were sitting around waiting for somebody else to do it. But tonight, we had guys on both sides of the ball that made some plays for us.”

Jackson said the Rebels had something else working in their favor as well.

It was evident right from the start. Boyle scored five plays into the game on a 16-yard run by Evan Tarter, then stopped Anderson at the Rebels’ 11-yard line and turned the Bearcats away with a missed field goal.

Tiller threw a 19-yard pass to Reese Smith that was the longest play of the drive and the one that moved the Rebels into Anderson territory. However, Boyle’s second scoring drive was led by a different quarterback.

Freshman Reed Lanter completed three passes for 32 yards to set up a 24-yard field goal by Nik Ruby that gave Boyle a 10-0 lead in the final minutes of the first quarter.

Tiller got most of the snaps at quarterback, but Lanter led three series in the first half — all of which ended in scores — and one in the second. Tiller finished 10 for 14 for 184 yards and three touchdowns, while Lanter was 6 for 12 for 69 yards.

“I thought it went smoothly. I thought it was a smooth transition from one quarterback to the next. I liked what we did, staying on the line of scrimmage in the no-huddle. They weren’t in that great of shape, and we just kind of wore them down,” Smith said.

Chuck Smith said coaches will “pick and choose” the spots in which Lanter might be used in the future.

“It’s going to go from game to game,” he said. “Sam is the starter, but we need to get the young guy some experience and see what he can do.”

“It worked great,” he said. “We scored the most points we have all season. I’m down with it if it helps us win.”

Anderson also used two quarterbacks, but not by choice. Starter Cade Cotton was injured midway through the second quarter and did not return, watching the second half from the bench with his right arm in a sling.

Backup Tyler Peters went 9 for 18 for 119 yards, but the Bearcats struggled to sustain drives against Boyle’s defense. They didn’t advance beyond the Boyle 29-yard line after their first series until they scored twice off the Rebels’ second team late in the game.

“They do all that misdirection in the wing-T, and once we kind of stopped that, they went to the spread passing game, and I don’t think that’s their strength at all. And then their quarterback got hurt, which made it even worse for them. Everything kind of played in our favor,” Chuck Smith said.

The Boyle coach said he would get more sleep after this win than on the three previous Fridays, but Tiller said that might not be the case for him.

“I’m not sure how early I’ll be going to bed tonight,” Tiller said.

Tiller hooked up with Reese Smith for a 66-yard touchdown pass and Tanner Crawford scored on a 1-yard run in the second quarter to give Boyle a 24-0 halftime lead.

Zach Hodge’s interception of a tipped pass on the first play of the second half set up a 1-yard TD catch by Kaden Gervacio, and Mitchell Paycheck’s fumble recovery led to a 37-yard field goal by Ruby later in the third quarter.

Reese Smith and Gervacio led Boyle’s small army of receivers with three catches each for 96 and 22 yards, respectively, and Crawford led the Rebels in rushing with 57 yards on 11 carries.

Boyle had one turnover and a handful of other errors, but the Rebels significantly reduced the number of mistakes they made compared to previous weeks.

“We still made too many mistakes, but we’re going to keep pushing for that perfect game,” Smith said. “We’re not near as good as we can be — and hopefully will be.” 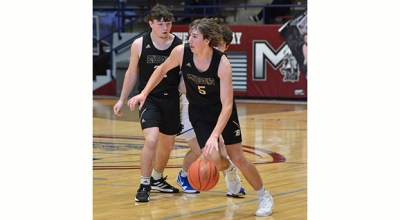 FOOTBALL: Admirals get humbled by Corbin