Raley sentenced to five years minus time served for manslaughter 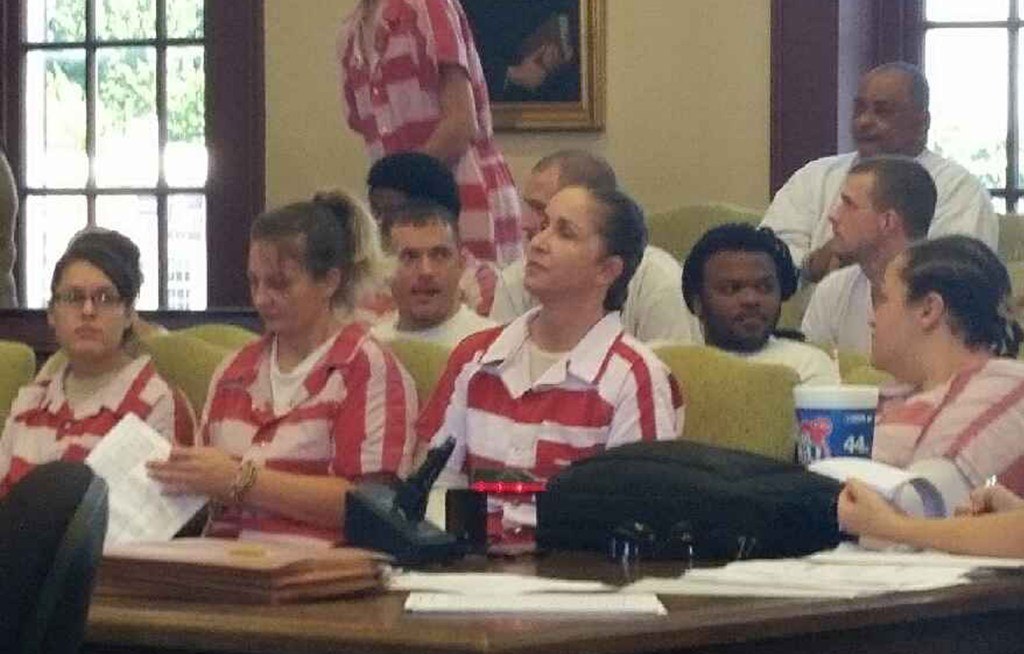 Kendra Peek/kendra.peek@amnews.com Shila Raley, third from left on front row, was sentenced Tuesday for second-degree manslaughter, a Class C felony. She will serve a total of five years in prison. With credit for time served, she will have about 38 months left on her sentence.

Approximately 38 months — just a little over three years. That’s the time the Parksville woman accused of causing her step-granddaughter’s death will spend in jail after her sentencing.

Shila Raley, 42, was sentenced on Tuesday to five years in prison. After credit for time already served, that leaves 38 months to serve. Raley pleaded guilty in September to second-degree manslaughter, a Class C felony.

Raley’s guilty plea was a special kind often called an “Alford Plea,” in which the person making the plea doesn’t technically admit guilt.

“You’re not admitting guilt, but you do admit there’s enough evidence in the hands of the commonwealth that it’s in your best interest to accept the plea,” Judge Darren Peckler explained when Raley pleaded. “It’s still a guilty plea; it’s counted as a guilty plea.”

Raley has spent an estimated 22 months behind bars since she was booked into the Boyle County Detention Center on Dec. 18, 2014, where she was held on a $1 million bond.

“(Accepting the plea) was a decision she made based upon a lot of prayer and faith. She’s absolutely, 100 percent confident that she didn’t do anything, in the way she handled this case, to jeopardize that,” said her attorney, Marcus Carey, after the sentence was delivered.

Raley is a Latter-day Saint, and relied heavily upon that faith, Carey said.

Alexa Raley had turned 3 on June 1, 2014, just weeks before her death on June 23, 2014, at the University of Kentucky Medical Center, due to blunt force injuries to her abdomen.

Shila Raley was indicted in December 2014 for allegedly causing the child’s death.

Alexa Raley’s family has waited for 22 months for an answer in court.

“Literally, the issue has been all along whether or not she did anything to hurt this child. Of course she didn’t. It’s clear she’s not guilty of murder and she also did nothing to hurt this child,” Carey said. “The issue was whether or not she was ever going to be forced to be in a position where she was going to have to admit to something that wasn’t true. She refused to admit to anything that wasn’t true.”

While accepting the plea deal in September, Shila Raley told Judge Darren Peckler that she was “at peace” with the decision to do so and that her family supported her “100 percent.” At that time, Commonwealth’s Attorney Richie Bottoms recommended five years.

“The nature of the plea was that she’s agreed to accept a sentence to save the family and everybody who has been touched by this tragedy any more pain of going through a trial, in a way that’s consistent with her innocence and consistent with her faith,” he said. “I think in that way and for that reason, we consider it to be a just result,” Carey said.

When asked if he was satisfied with the result, Carey said, “Nobody could possibly be satisfied in a situation like this where you’ve got a death, particularly involving a small child. I’m confident the resolution was just.”

“We have our investigation. The commonwealth has their investigation. To be quite frank with you, the people of Boyle and Mercer County should be very fortunate and recognize that Richie Bottoms and Judge Peckler are very honorable people. The people of this county and of Mercer County, their rights and liberties are in good hands. Through a lot of hard work and negotiations we came up with what we thought was a fair result.”