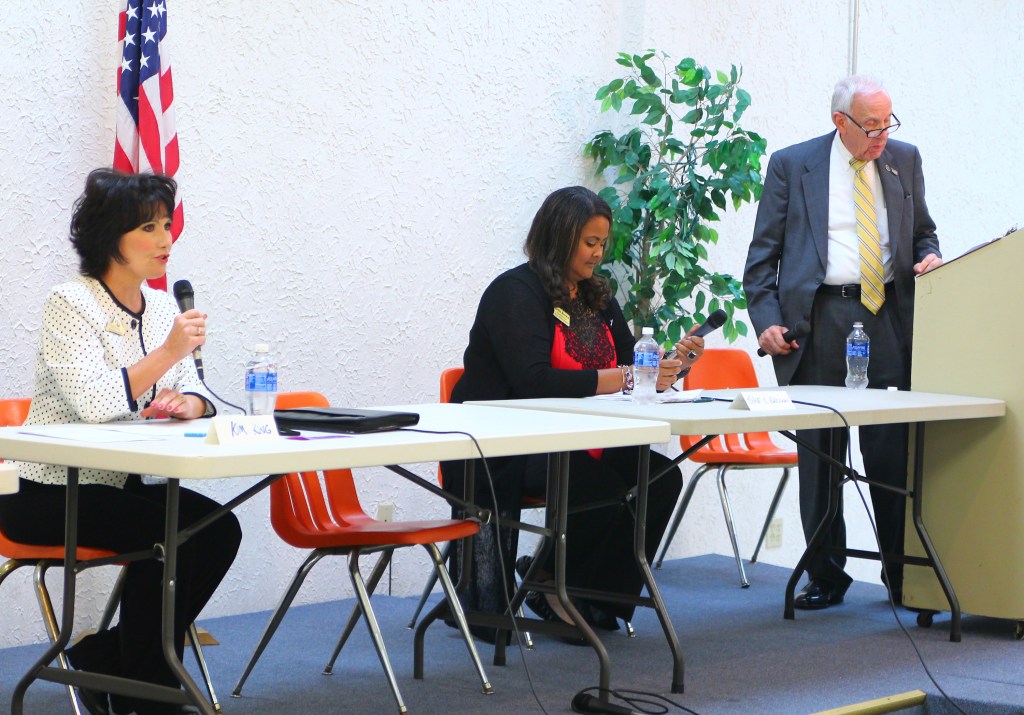 HARRODSBURG — The Democratic and Republican candidates for state representative in Mercer County headlined a candidate forum Tuesday evening, held at the Harrodsburg Lions Community Center and broadcast live on WHBN.

Motzer first asked the candidates why they are seeking to represent the 55th District in the state House of Representatives.

“Our five granddaughters are my primary focus and motivation,” King answered, explaining that she wants to ensure her granddaughters have a good future in Mercer County.

Brown said she feels there has been a “disconnect” between politicians and constituents. 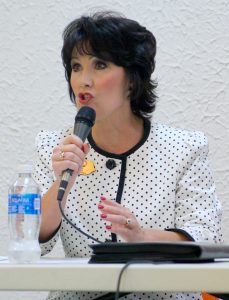 “One thing I do anticipate is for the Republicans to take majority of the House of Representatives following this upcoming election and I highly anticipate that I will be appointed chair of one of these committees going forward,” she said. “I look forward to that leadership role. I am very dedicated, I do my homework, I come to committee prepared and I am fully equipped and ready to take on that challenge.”

King said she is also vice chair of the Central Kentucky Caucus, a group of representatives from central Kentucky counties that works together on regional projects. That’s “a very good leadership role,” she said.

Brown argued that many in the 55th District are currently overlooked or ignored by current leadership.

Brown said many of the community’s problems such as drug-use issues stem from poverty. She is in favor of raising the minimum wage. 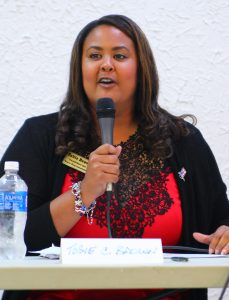 If elected, Brown said she would like to serve on the House Education Committee and “be a champion for our children.” She said she is against charter schools and believes they would take funding away from public schools that need the funding.

One question posed by Motzer was “Do you agree with your party’s platform?”

King said she “absolutely” agrees with the Republican platform.

“I definitely believe in the Republican Party platform, which is pro-life — protecting reborn life, traditional marriage, strong national defense,” she said. “I very much appreciate that question because I think that that’s something that our voters and our citizens don’t realize how important that is. The general population has the luxury of saying, ‘I’m a conservative Democrat,’ but when you file for office, you do not have that luxury. So, you attest and you vow that you will uphold your official party platform, and we have printed copies of that if you would like to see and make sure that you are registered according to your values.”

Brown said she appreciates the Democratic Party because it was founded by Thomas Jefferson.

“One of the reasons that the donkey is a symbol for the Democrats is because everybody was going around calling this guy a jackass and the reason that they called him a jackass is because he believed that people should rule, that the power was in the people. That is why I am a Democrat and it’s why I’m proud to be a Democrat. And I’m also a born-again Christian. I frankly am tired of defending my Christianity, defending my morals to Republicans and all across Kentucky.”

Brown said people assume that being a Democrat means you’re not pro-life, yet one in three Democrats are pro-life. She said she also supports the right to bear arms.

Motzer’s final question to the candidates was why voters should choose them.

King said her six years in the state house have given her “institutional knowledge,” allowed her to make connections and helped her build relationships with senators and the governor, among others. She said she has also worked with members of the other party, including Attorney General Andy Beshear, who she said is working with her on a bill concerning cyber crimes against children.

“I have a very good track record of working with folks from both sides of the aisle,” she said. “… I have a working knowledge of everything, all my committees, I do my homework and I think I am the better choice for this conservative area.”

Brown began her answer, “I think my biggest qualification is that I’m not a politician.” After a pause, she added, “I’m going to let that marinate just a bit.”

She listed accomplishments and local leadership programs she participated in.

During King’s closing statement, she noted that she successfully sued the General Assembly in 2012 over a redistricting plan that would have split Mercer County between districts and took the case to the Kentucky Supreme Court in order to keep Mercer in a single district.

King said she wants to continue to work on her “signature bills” mandating legislative accountability and eliminating pay for legislators during special sessions if a budget has not been passed. And she pointed out her endorsements from Kentucky Right to Life, the NRA and the National Federation of Independent Business.

“After six years of legislative service, you know my commitment to your values, you know my work ethic, and you know my dedication to transparency, fiscal responsibility and common sense,” she said.

During her closing statement, Brown said she believes everyone is a “farmer” and everyone is “constantly sowing and we are all constantly reaping … what goes around definitely comes around.”

“Ms. King is asking for everybody’s support. She wants you to vote yes in November. But when has she voted for us?” Brown said. “All due respect — because my intention really isn’t to be nasty — but at the end of the day, this isn’t a popularity contest. This is about my future, this is about your future, this is about your kids’ future, and I’m tired of being told ‘no.’ I know the word ‘yes’ and I’m not afraid to use it. I am asking you that if you will stand with me, I will stand for you. And I am asking you to simply sow a seed in our future today.”

Editor’s note: Candidates for Mercer County circuit court clerk and the Harrodsburg City Commission also participated in the forum. Those portions of the forum will be covered in Thursday’s Advocate-Messenger.