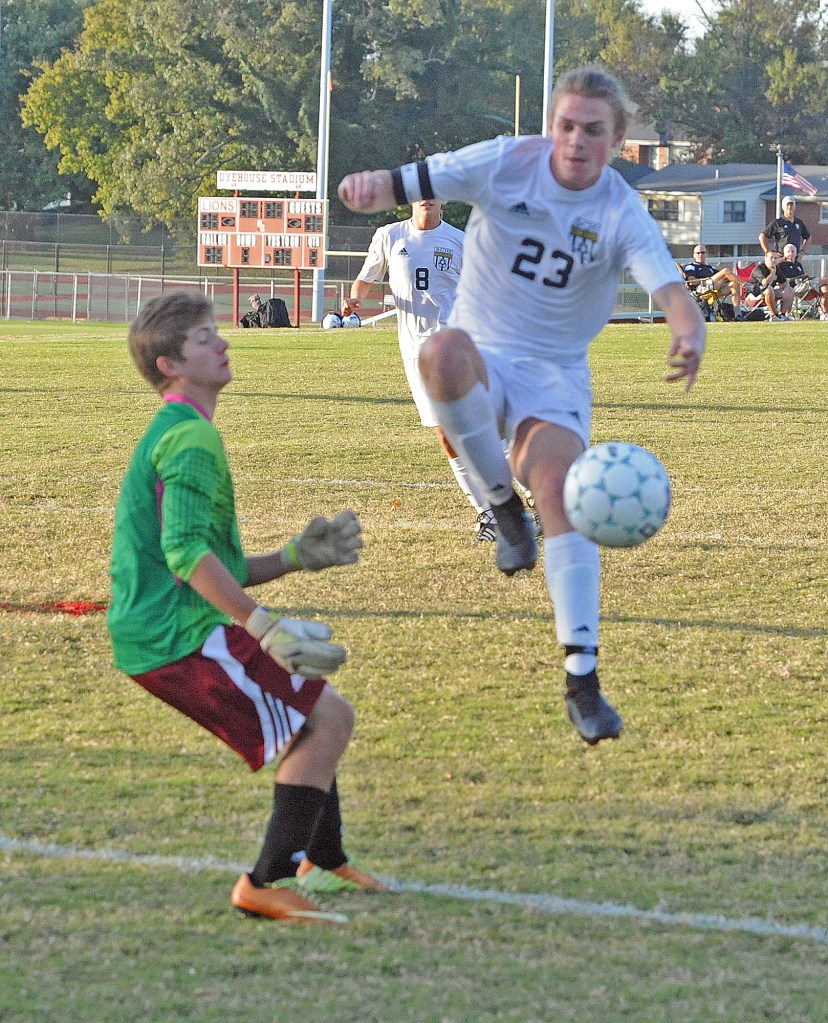 LANCASTER — Tuesday’s outcome was an expected one for Boyle County. The Rebels are focused on Thursday.

Boyle starters played for the first 10 minutes and led 4-0 before the reserves finished the game. It took 42 more minutes for the substitutes to end the game via mercy rule.

Eli Goggin was the leading scorer on the day, netting three goals in three minutes late in the first half. Adam Steinhauer scored two, including the final goal of the game, and Riley Cocanougher scored twice. Adrien Van Steenlandt, Caleb Jackson and Hunter Baltazar each scored one for the Rebels.

Boyle coach Cris McMann said he was happy with the way his team played but wanted them to stay focused on the bigger prize.

“I feel good. We kind of knew that was how it was going to go,” he said. “Thursday’s the big match. I feel good about my team. I think they’re ready.”

McMann said he spoke with the reserves about making an impact, not just for this game but for their future.

“At halftime, we talked to them a little bit. We’re looking at guys for next season,” McMann said. “They did well. There’s more that they need to do, but we feel good.”

Garrard coach Chris Grecco said he couldn’t fault his team’s effort again on Tuesday. The loss means the Golden Lions will finish the season winless, but Grecco said that won’t deter his team.

“They tried hard, and that’s what we did all year,” Grecco said. “The biggest thing for us, we start freshmen, sophomores. It’s a bunch of kids who haven’t played soccer for years. It’s hard to play against these guys. So I told them, there’s opportunities to play indoor. We’re going to continue to do pickup games, they can try to get involved in club soccer somehow, and that’s how they’re going to become better players.”

Grecco said his players are asking about how to get more involved. One player even asked if they would continue practicing, even though the season is over.

“This team does try hard. We didn’t win a game all year, so a lot of the guys you would think would have their heads down,” Grecco said. “And they really didn’t. They came out and said, ‘We’re going to win this game,’ and they gave a lot of effort.”

Boyle senior Ethan Nordine said it was hard work that helped them win Tuesday, and hard work is what it will take to win on Thursday.

“It was a good win. Our subs went in and played a really hard game, they worked their butt off. I’m very proud of them,” Nordine said. “We need to go in (Thursday) with our heads up high and work, whoever we come up against. We can’t take nobody lightly this time of year. Anything can happen.”

Nordine said the team’s 5-3 loss to Lexington Catholic last week was something they needed before the postseason.

“That was kind of a let down for us, that was a wake up call, saying we need to work 100 percent of the time, start to finish,” he said. “It’s going to take a full 80 minutes. We’re not going to take anybody lightly.”

McMann said the Rebels have their sights set on a rematch with Mercer County in the 12th Region tournament. The Titans beat Boyle 2-1 last year in the region championship, and the year before, Boyle beat Mercer 3-2.

To do that, though, it’s going to take focus. Priority number one: Beat Danville in Thursday’s final and host the region.