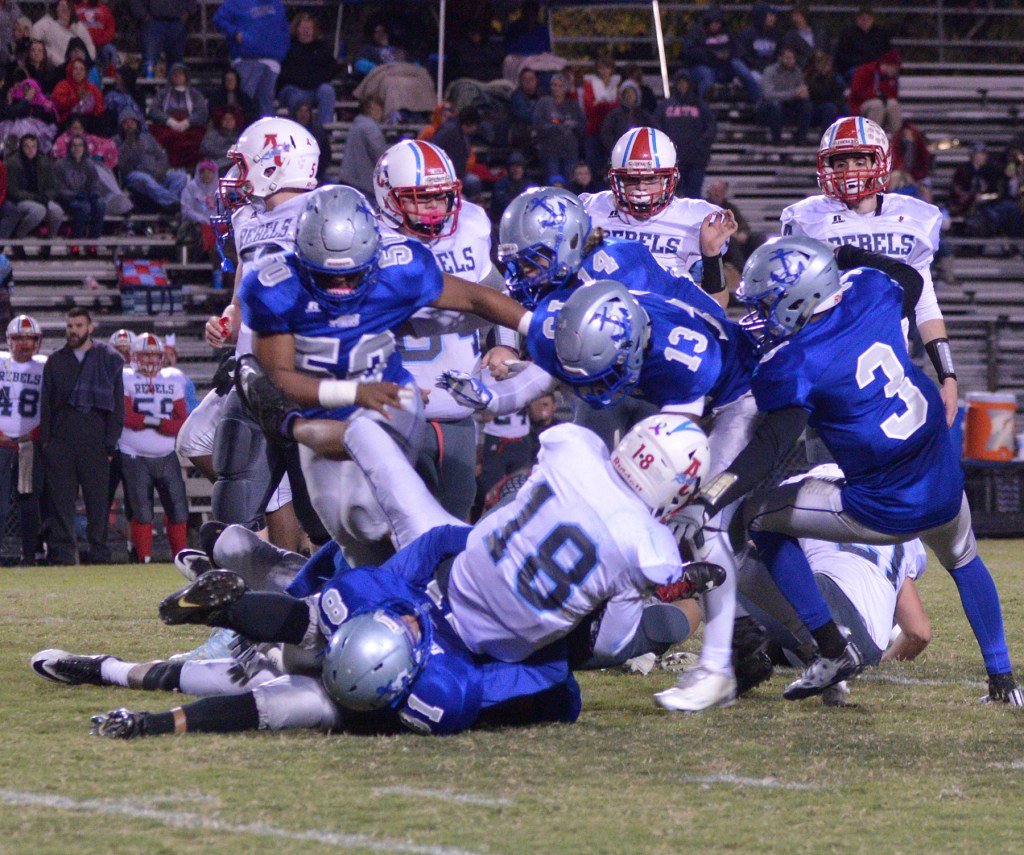 Long gone are the days of Tim Couch slinging the football around the football field at Leslie County High School.

But that’s not to say the Eagles aren’t successful — they just go about winning differently than they did 20 years ago. Of their 4,157 total yards this season, Leslie has rushed for over 71 percent of them.

When Danville travels about two hours east for the Class 2A playoffs second round game at 7:30 p.m. Friday, the Admirals will have to deal with a team which boasts three players who average at least 60 rushing yards per game.

“They’ve got good size, they have good depth, they play a lot of bodies,” Danville coach Clay Clevenger said. “They roll a lot of bodies in and out, try to wear you down. It’s one of those things that sticks out is the amount of players they play.”

Lucas Vance, a 5-foot-9 senior, leads the Eagles (10-1) with 974 yards, scoring eight TDs and averages 10.4 yards per carry. Seth Melton is next with 658 yards and eight scores, and Darron Whitaker has a team-high 12 rushing TDs.

Vance had 174 yards and a score last week, but as a nod to the depth of the Eagles running game, Luke Lewis had 114 yards and a TD in the 44-26 win over Middlesboro. Lewis came into the game with 120 yards and two scores for the season.

“They’re a two-back offense, you see a lot of counters and isolations and things like that,” Clevenger said.

Melton and Whitaker have split time at quarterback. Whitaker has thrown for 698 yards and seven TDs while Melton has 497 yards and four scores. The two have thrown one interception between them.

Since losing by four points to Class 5A South Laurel in Week 4, the Eagles have reeled off seven straight wins. During that span, they’ve given up just over 17 points per game while scoring nearly 43 points per game.

“It’s a four-down look, they’ll play a one-high and two-high safety, depending upon down and distance,” Clevenger said of the Leslie defense.

“We’re really going to have to be disciplined on defense this week in our front seven so we don’t get out of position. They do a good job of mixing in quarterback runs as well, so it gives them another blocker. We need to come out and play aggressively and be able to slow them down a little bit.”

The Ads (9-2) will test the Leslie defense with their potent and varied passing game. Over the last two games — wins over Frankfort and Allen County in which the Ads have scored 98 points — quarterback Zach Dampier has completed 66 percent of his 32 attempts for 417 yards and five scores with one interception.

Dmauriae VanCleave had a monster showing last week, catching five passes for 123 yards and a score, adding another score off a 55-yard punt return. He has 217 receiving yards and three total TDs in the last two games.

While much has changed about how the Eagles win games, one thing which hasn’t is the support they receive on their home field. They’ve won 15 of their last 17 games in Hyden.

“Having seen some of their films when they’ve hosted teams, it’s going to be a great crowd, a hostile-type environment,” Clevenger said. “I feel like drawing back to some experience, going to Boyle this year, some things like that hopefully gave us experience in that type of atmosphere.

“But this is the playoffs. It’s probably going to be comparable to the semis last year in northern Kentucky.”

If things can go Danville’s way, this could be the last road game they’ll face until the state finals. An Ads win coupled with a Somerset win over Lexington Christian would set up that rematch at Admiral Stadium, and the state semifinals are to be hosted by Danville’s region.

But there’s much which needs to go the Ads way before any of those hypotheticals take shape. A road win at Leslie could be as difficult as winning two or three on the road.