The Garden Club of Danville is putting the profits of its popular spring garden tours to work for the community.  Recipients of the club’s 2017 Special Projects Awards have been announced. The grants were awarded for special projects furthering the club’s mission to encourage the advancement of horticulture and creative design, aid in civic beautification, and promote conservation and protection of natural resources.

Joyce Eulner, Chair of the Special Projects Committee, said “This is an opportunity for the Garden Club to expand our presence and activity in the community by sharing revenue from the popular garden tours.” Some of Danville’s most talented and creative gardeners generously opened their gardens to the public in 2013 and 2015. A portion of the funds raised is being used for club members to undertake community projects, either individually, in teams, or in partnership with other community non-profit organizations.

The largest grant of $500 was awarded to The Danville Tree Project, a 10-year plan to plant 500 trees along Danville streets, with an emphasis on native trees. For the past two years the Garden Club has made the largest gifts for trees, according to Centre Professor Beau Weston, organizer of the project. Past President Fran Halloran submitted this grant proposal. 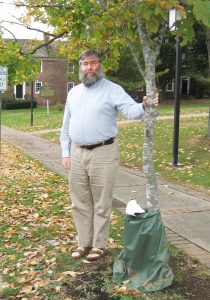 Centre Professor Beau Weston organized the Danville Tree Project which aims to plant 500 trees along Danville Streets in 10 years.  The project was awarded $500 from profits of the Garden Club of Danville’s popular Spring Garden Tours. The young trees with green water bags at the base can be spotted along major streets.

The Garden Club’s Julie Pease was awarded $175 to educate families in the Housing Authority’s Crescent Drive Community on the pleasure and rewards of growing their own food, beginning with easy to grow and prolific cherry tomatoes.

Next spring, with the help of Garden Club members and Boy Scout Troop 27, 50 starter tomato plants will be given away in buckets of soil, along with advice on caring for them.

Club member James Ross was awarded $200 for a four month sponsorship of his Saturday morning radio show, “Gardening With James,” on WHBN Radio. The advertisements will highlight activities of the Garden Club of Danville, promote the 2017 Garden Tour, and will feature members of the club speaking on gardening topics. 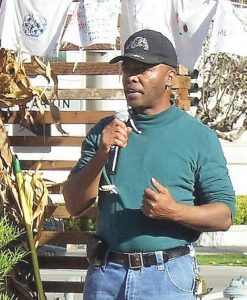 Garden Club of Danville member James Ross was awarded $200 to sponsor four months of his call-in show “Gardening With James” on WHBN radio.  The sponsorship will allow the Garden Club of Danville to promote its activities and feature interviews with club members on gardening topics.  The show is broadcast at 8:00 Saturday mornings on WHBN AM1420.

The fourth grant of $88 was awarded to long-time club member Gigi Biles to donate the book “The Frightened Frog” to every public elementary school library in Boyle County. This is a book written to educate elementary children about the environmental issues affecting amphibians. It includes facts about frogs, a story describing the challenges of being a frog, and ways children can “Leap into Action” to help protect, preserve, and support frog and amphibian habitats.

Proceeds from the 2017 Spring Garden Tour will go towards future grants.

The Garden Club will be looking for projects which have a strong public impact on the community, show potential to be self-sustaining once the funding ends, can be accomplished in two years, involve partnership or sponsorship with other non-profit organizations or agencies, and possess a strong educational component.  For more information, see www.gardenclubofdanville.org.