Group gathers to hear stories from recovering addicts, their families 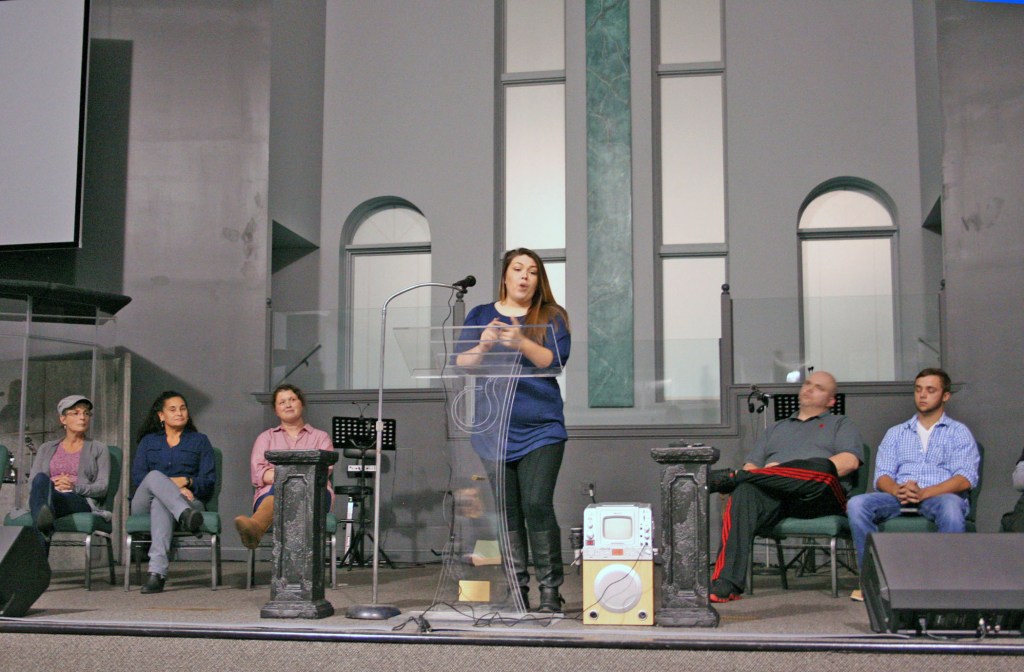 Kendra Peek/kendra.peek@amnews.com Victoria Ashley Lopez speaks as part of a panel of recovering addicts and their families Thursday night at the You NEED to Know Me event, held by Families Into Getting Help Together.

Substance abuse was nothing new to Victoria Ashley Lopez, who saw her family deal with it starting from a very young age.

“I was raised with the mentality … it’s kind of hard to describe. This is so deeply ingrained in me. It’s something that I’ve always seen,” Lopez said Thursday night to those gathered at the “You NEED To Know Me” event, sponsored by Families Into Getting Help Together, or FIGHT.

The program featured a panel of recovering addicts and their families sharing their stories and answering questions for attendees. Lopez was one of four who shared their stories.

“There’s a lot of addiction in my family; it was nothing foreign to me,” she said. “In high school, I was part of the ‘bad’ kids. I drank a lot; I smoked a lot. Because of what I saw when I was younger, I was like, ‘I’m not going to do that,’ but it was the lifestyle for me — the fast life, the money.”

Lopez said many of her family members have battled substance abuse in some form all of her life. Many of those family members are in or have been to jail, including her brothers.

“I never really witnessed anyone making an honest living,” she said. “The lifestyle was one of the hardest things for me, that fast money. That was something that felt like it came naturally for me. I used to think that was cool. I know with everything in me, this is a disease.”

A native of Lincoln County, Lopez stayed in the area after she “barely” graduated.

“I did the party thing. When I was 19, I started doing prescription pills. That’s when the perc 30 epidemic hit. … I wasn’t a drug addict at that point. It started as something fun — partying. One day, I woke up and I was sick. And it was too late by then.”

It was January 2014 when her life began to turn around. At the time, Lopez and the father of her children “were doing stuff we weren’t supposed to.”

“The Boyle County Sheriff’s Department kicked our door in and took my kids,” she said. The two were charged with trafficking and wanton endangerment.

“I carried a deep resentment with that for a long time,” Lopez said. “My boys had to watch the Danville Police Department, along with KSP, come in. Thank God for that. I’m not saying it’s a good thing that it happened — that’s a very traumatic event for a nine-month-old and a two-year-old to watch.”

But it was the beginning of a point of change, she said.

“I sat in that jail every single night and cried myself to sleep wanting my kids,” she said. “If you would have said I was going to get high when I got out of there, I wouldn’t have believed you. I never wanted that again.”

And for a few months, it worked. When she was released, Lopez got a job, a car and a place to stay.

“I held on for a really long time. I white-knuckled it,” she said.

“I had sold it, but swore I would never do it. I started using heroin in July of last year. By the time I left in November for treatment, I was bad. I was in really bad shape. I wrecked three cars last year,” Lopez said.

Lopez eventually failed a drug test from probation and parole. But instead of jail time, they sent her to get rehabilitated at Liberty Place.

“That’s how I know it was God, because you don’t hear too many girls around here and in Lincoln County that get a chance at treatment. It’s usually jail. She said, ‘You’re going to long-term treatment. You’re not going to learn anything in jail and I know you can do this,’” Lopez said.

At first, Lopez said, she saw being sent to treatment as a punishment, but in the end, it turned out to be the “biggest blessing” of her life.

“They taught me how to live. They gave me the tools, a program and my higher power. That’s what saved my life, is my God. Liberty place gave me the tools and a chance to start a new life. I don’t want my old life back. I wanted something new,” she said. “Recovery is beautiful.”

Last week, Lopez celebrated one year of being clean and sober.

“I struggle and I have hard days, but I get through them one day at a time. I haven’t had to pick up a drink or a drug over any of it,” she said. “My life is beautiful. I’m blessed to have the people in my life I do.”

Lopez said she is looking toward the future, but takes it one day at a time. She wants to go back to school. She wants to do something to make a difference in others’ lives.

“Recovery is possible. Life is not boring. Recovery is a beautiful thing,” Lopez said.

She’s thrilled to be an active part of her sons’ lives. They are three and five years old, and currently live with Lopez’s mom, while she continues working to stay clean, living in Richmond, surrounded my her support, near her sponsor and in sober living.

Lopez is one of a handful of stories that FIGHT founder Toni Ward said she wants to highlight. A daughter and sister of addiction as well, Ward has seen her own family battle it and said she’s sick of watching it kill people.

While there wasn’t a big turnout Thursday night, which Ward said she was “not happy with,” those who were there were open and honest with their stories.

In March, Ward said FIGHT plans to have another event for families, this time an informational fair, to share information about rehabilitation centers, insurance and more.

“People can’t help if they’re not present. Addicts are pouring their hearts out to help others. But others have to come out to get help, be help,” she said. “Too many are losing their lives.”