Born July 7, 1927, at Quinton, Kentucky, in Pulaski County, he was the son of the late Everett Arnold, and Eula Mae Cole Wallace. 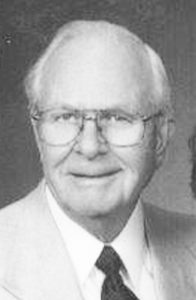 He had served on many conference boards and held several positions, while contributing several series of lessons for the United Methodist Church School publications. He also enjoyed serving in several civic organizations and was a trustee of Lindsey Wilson College for 12 years.

He was also preceded in death by one brother, Pat Wallace.

Funeral service for Rev. Wallace will be held at 11 a.m. Monday, February 6, 2017 at the First United Methodist Church in Richmond, with Rev. Bruce Nettleton, Rev. Gene Strange, and Rev. Mark Girrard officiating. Burial will follow in the Richmond Cemetery.

Oldham, Roberts & Powell Funeral Home is in charge of arrangements.