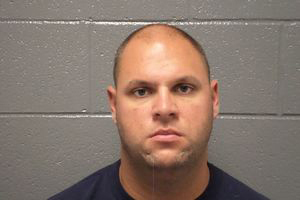 Bobby Cassady, the former youth minister and school volunteer charged with 22 counts of first-degree unlawful transaction with a minor under 18, was in Boyle County Circuit Court Tuesday.

It will be April before he returns, as the prosecutor waits to see if federal charges will be brought against Cassady.

Commonwealth’s Attorney Richie Bottoms made the request to wait until April to Judge Darren Peckler, because he said they wanted to “see if there will be any action by the feds.” Bottoms said they should know by April if that will happen.

According to files obtained from the Boyle County Circuit Clerk’s Office, Danville Police officers were contacted on Oct. 25, 2015, by a juvenile male who said a man was being held against his will. The investigation led them to Cassady’s address at the time. Police believed Cassady was the possible victim. Officers made contact with Cassady, who was “found to be safe and that he was not being held against his will.”

Cassady was friends with the juvenile who called police and told officers that “he had knowledge that the juvenile had been receiving strange messages from strange numbers, but has not reported those incidents to the juvenile’s parents.”

The report states that the juvenile had been contacted by “various unknown numbers. These contacts were requesting the juvenile to send explicit photos and video of himself and contained threats if the juvenile did not comply.”

One of the threats received on Oct. 25, 2015, said that Cassady would be hurt if the juvenile did not send an explicit video; he complied.

Other threats sent to the teen said “he would be exposed and that the photos would be released. The messages were direct and demanding of the juvenile.”

One of the phone numbers was “associated with a contact identified as (Cassady),” according to the file.

“The nature of those phone messages indicated that (Cassady) was conducting some kind of investigation into the unknown individual that was making demands for the explicit images,” and that the juvenile was told to continue responding to the messages while Cassady “was conducting his investigation,” police reported.

“Based on the messages, it appears that the juvenile was being told that (Cassady) has some kind of police powers and that he conducts such investigations and or arrests.”

The file also states that an unidentified witness came forward claiming to have had a conversation with Cassady in which he said he “was doing bad things and was making contact with juveniles and getting explicit images from them.”

“According to the witness, the juveniles were unaware that the person they were sending the images to was really (Cassady).”

According to the file, Cassady allegedly told officers that he was the one obtaining the images, was using a “phone or computer application” that allowed him to do so anonymously, and that it had been going on for three or four months. The juvenile was not aware it was Cassady, the file states.