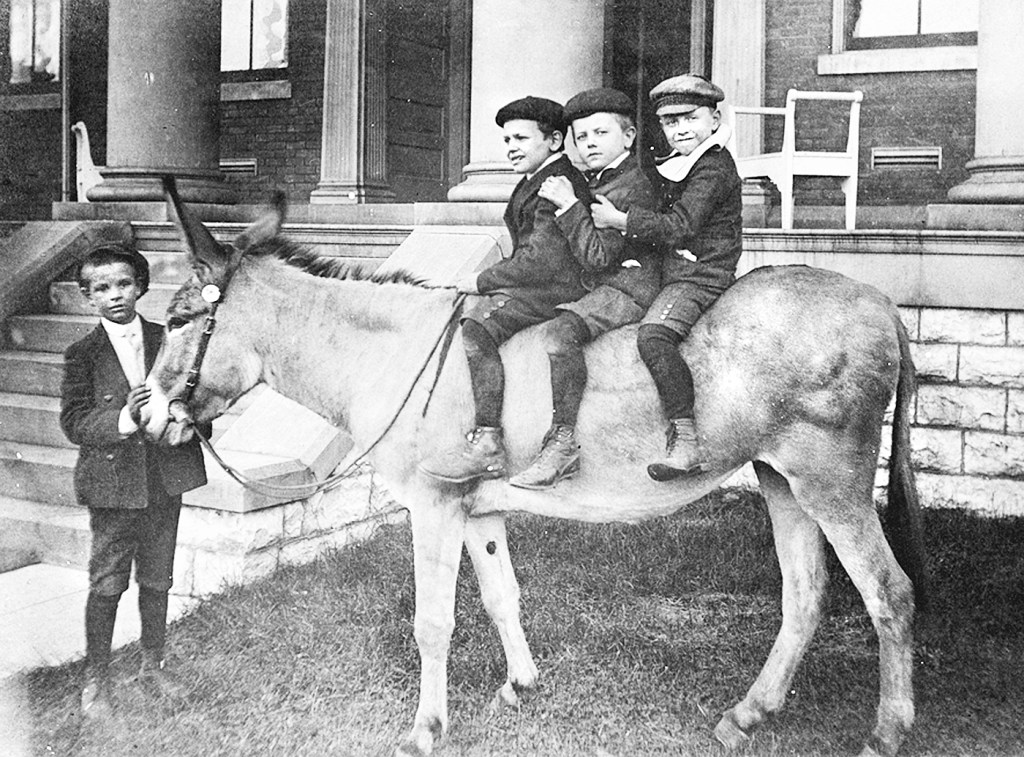 In the early 1900s Charles Fosdick photographed KSD students Ansil Haggard, Roy Hertzman, Paul Webb and Maurice Whitehead with the school burro. She was loved by the little boys and provided fun and entertainment for several generations of students. 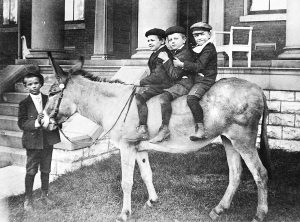 In the early 1900s Charles Fosdick photographed KSD students Ansil Haggard, Roy Hertzman, Paul Webb and Maurice Whitehead with the school burro. She was loved by the little boys and provided fun and entertainment for several generations of students.

Elizabeth Hopkins, a sweet little girl of eight years, died Sunday morning of pneumonia, following an attack of measles. This was her second year in school and she was making excellent progress in her studies. She was bright and winning, and drew everyone to her, and her death has filled our household with sadness. Her mother died several months ago. Her father was with her when the end came, and took the body to Crab Orchard for interment. He was devoted to the little girl, and much sympathy is felt for him.
The Danville Fair Grounds, a lovely place just outside the city limits on the Perryville Pike, was sold Monday at public outcry. Dr. John D. Jackson, our School physician, was the purchaser.
Workmen are engaged in tearing down the old Young house on Third Street, close to the school. The site has been purchased by the City Hospital Committee, and, as soon as the demolition of the present building is completed, work on a large modern hospital will begin. The old building was, in its day, one of the finest homes in the city, and has an interesting history. At the time it was built, it was in the center of the fashionable residence district, and many distinguished people were entertained there. The last member of the Young family to occupy it was Mrs. Robert P. Jacobs, whose husband was a son of Mr. John A. Jacobs, for so many years Superintendent of this school. About twenty-five years ago he built the handsome Jacobs residence on Lexington Avenue, and the old house passed out of the possession of the Young family. It had changed hands many times since, its latest owner being Hon. C. C. Bagby who sold it to the hospital committee. It was one of the landmarks of this portion of the city, and will be missed by old graduates of our school when they come back in the future.
Some of the girls went to the Opera House with Mr. Morse and Miss Lea Meredith and we liked the shows. We had not gone up town or to the “movies” for two or three months on account of measles and other diseases.
On Valentine’s Day Miss Barker’s class had a party in their schoolroom. They played Post Office. Henry Grimme was postmaster. The children went to the post office and asked for their mail. The postmaster gave many pretty valentines to them. Miss Joiner, Miss Doneghy and her class came to the party. Each one received a pretty valentine. Josephine and Fannie passed a basket of cakes and candy. All had a very happy time.
We have given Gladys Risley a new nickname. It is “Rajah” because she bosses us girls around and insists upon us obeying her. When the secretary of the Literary Society invited “Rajah” to give us a Declamation on Saturday night, she made a good excuse. She said she couldn’t give a Declamation at that time because she hadn’t a fine dress to wear but she could wait till her mother sends her one. Then she would give us the finest Declamation we had ever seen. 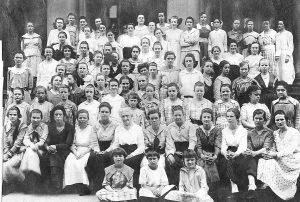 Jacobs Hall girls, 1917-1918. Miss Martha Stephens was the older girls’ supervisor. Gladys Risley, aka “Rajah”, is the first girl on the left, in the first long row of seated girls. Gladys was born December 6, 1900, and deafened at age 9. She entered KSD September 13, 1916, and graduated in 1918. She went on to attend Gallaudet University.

February 1942
KENTUCKIANS AT AKRON —  The rubber shortage has, of course, affected the big tire factories in Akron, Ohio, where a good many of our graduates are employed. Most of these are holdovers from the boom days of 1917-19 when seven or eight hundred deaf workers were employed in the Goodyear Co. alone. These old timers have held their jobs all these years because of merit, practically all of them being members of the “Flying Squadron” which means that they are so well-trained that they can be transferred from one department to another when the need arises. But this is the age of the machine, and so much of the work of tire manufacture is done by these [machines] that, of late years, hours of employment dwindled, in some lines, to a point where the worker’s weekly pay check was discouragingly lean. But the restriction of the rubber supply and the war situation has caused a change in objectives, and the factories have turned to other lines of defense work and the deaf are returning to full time employment.
The deaf of Akron made a shining record of service in world war No. 1 and it appears that they are to be given the opportunity to again demonstrate that deafness is a minor factor where a skilled hand and an intelligent brain are required.
The newly-organized Literary Circle, composed of the deaf residents of Danville, had its first meeting Saturday evening, Jan. 31, in the chapel. Mr. Higgins, the Chairman of the Program Committee, presided. The speakers of the evening and their subjects were: G. M. McClure, “John Marshall, Father of the Supreme Court”; Miss Woolslayer, “The Story of Japan,” and Mr. Balasa, “A Story of Henry Clay.” A near-blizzard was raging outdoors but in spite of this, a good crowd was present and the Circle got off to a favorable start. The meetings are to take place once a month.
THE FOOTBALL UNIFORMS DRIVE PASSES THE $150.00 MARK —  After two and one-half months’ work on the drive for new football uniforms, the Athletic Association boys have realized $150.63. Through the generosity of friends, sport fans and “Ol’ Timers” the boys have realized half of the goal set. At a recent   meeting the drive committee decided to hold several shows in the chapel to increase the fund. The first showing of movies will be held   February 28. Others will be announced later. The committee is also making plans to have a big party in the gym sometime in March. These plans will bring the drive to near its goal. If you “Ol’ Timers” feel like it you may send a donation to THE ATHLETIC ASSOCIATION, Preston Love, Treasurer. K.S.D., Danville, Ky.  Your name will appear in the next issue of The Standard.
DANIEL—BALASA
Miss Mary Elizabeth Daniel, a graduate of this school and Mr. John Joseph Balasa, educated at the Mt. Airy School, Philadelphia, were married Saturday, February 28th, by Judge Maurice J. Farris, Jr. at his office in the Boyle County court house. A few relatives and close friends witnessed the ceremony. After the wedding the couple left for Cincinnati on a brief wedding trip, but were back Monday morning to resume their duties at this school.
Mrs. Balasa has been officers’ cook (and a good one) for several years past — friend Joseph has drawn a capital prize in the matrimonial lottery. Mr. Balasa is instructor in tailoring in our vocational department, coming to us in 1934. Both are intelligent and popular. The Standard joins their many friends in wishing them the best o’ luck in the coming years.