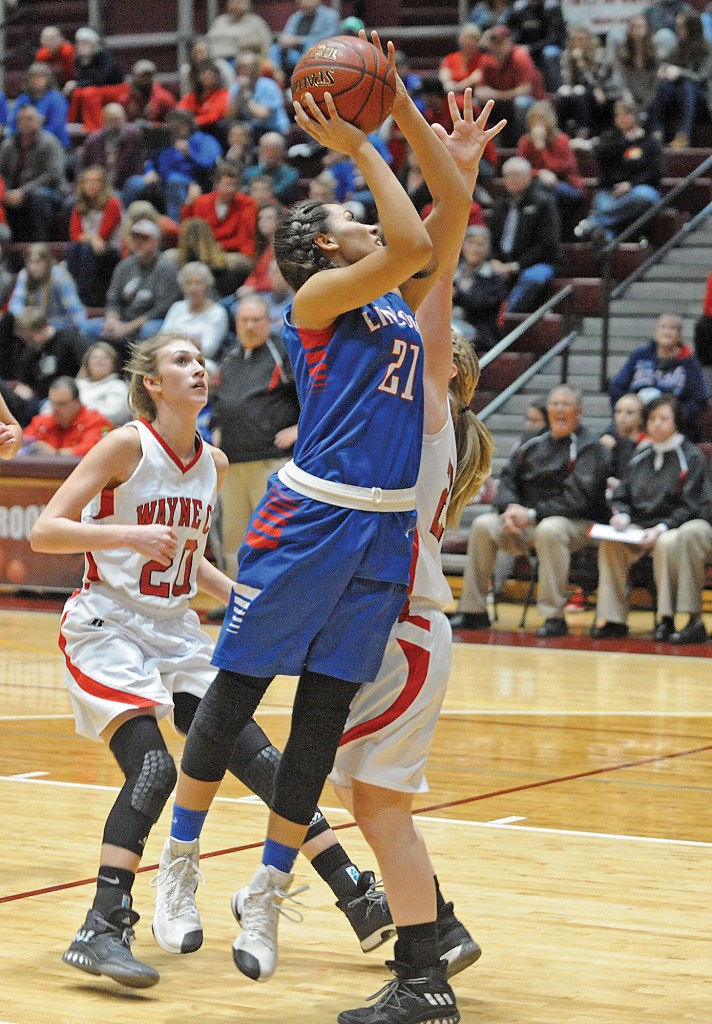 SOMERSET — Wayne County knocked Lincoln County out of the boys basketball region tournament Wednesday, and Friday night the Patriots returned the favor by eliminating the  Cardinals in the girls 12th Region semifinals.

Lincoln handed Wayne its walking papers in an 81-59 rout in the second game of Friday’s semifinal round at Pulaski County.

McWhorter and the Patriots watched the first semifinal game from the sidelines, but the Titans’ blowout win and anticipation of a championship rematch didn’t affect Lincoln’s play in the nightcap.

“We watched the first game, but the girls were really focused on our game tonight. We’ve really been drilling it in their heads that you can only take one game at a time,” McWhorter said. “You can’t advance until you win your game. We were watching in preparation, but we knew we needed to take care of business tonight and I’m proud of our girls for stepping up and doing that.”

Boyle got the Patriots off to a runnin’-and-gunnin’ start by draining a game-opening 3-pointer then following with a layup off a steal. Lincoln also got a steal off the next Wayne possession and Wilks converted on a three-point play to extend the  Patriots’ lead to 8-1.

Emma King made it 10-1 with a bucket in the paint then Emma, a sophomore, and her sister Jenna, a senior, traded baskets and free throws over the next four minutes for a 22-13 margin.

The Pats strung together four straight points to close the first period, with Wilks getting a putback late and Southerland sinking two free throws to put Lincoln ahead 26-15.

Macey Blevins, who finished with 10 points for Wayne, and Taylor Bell had a 3-pointer apiece in the first quarter. Ashtyn Bell was good for five points in the frame and Hannah Jackson, who had a game-high 21 points, scored four points.

Southerland and Jenna King continued to hit in the second quarter, with both adding six more points. Wilks, Boyle and Emma King also contributed to the scoring in the second with Zaria Napier, Trinity Shearer and Anna Lane getting in on the scoring as the  Patriots distanced themselves from the  Cardinals, 52-25.

Wayne never threatened the Lincoln lead in the second half, but Jackson, who was 5-for-6 from 3-point range, helped to whittle away at the deficit in the fourth quarter, nailing three of her five 3-pointers to help Wayne outscore the Pats 19-10 in the period.

While getting a running clock is not McWhorter’s goal in a ball game, she admitted she was happy to see it in Friday’s semifinal game.

“To win the way that we did in the semifinal tonight is huge, to get that running clock,” she said. “You don’t want to embarrass a team, but playing the late game tonight I was kind of in hopes for a running clock so the game would be shorter and we’d get home sooner and we’d get these kids off their feet and get them ready for tomorrow.”

Lincoln outrebounded Wayne 41-21.  Pat Zaria Napier had seven boards to go with her seven points and Southerland got six rebounds. Taylor Bell and Meg Burchett both had four rebounds for Wayne.

Boyle had four assists for Lincoln and Logan Godbey and Shearer both had three.

Both teams had 17 turnovers.