Archibald F. (Arch) Rochester was called “one of the foremost negroes of the community in the late 1800s and 1900s.”

He was the first African-American to serve on the Danville City Council, a truant officer for local “colored” schools, and was a leader in the First Ward Republican Party in the South Second Street community. He also ran a saloon. 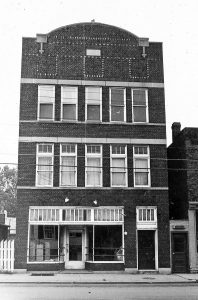 Headquarters of Doric Masonic Lodge No. 18 on South Second Street as it appeared before it was razed for the Urban Renewal Project.

He was a house painter by trade,and served as a member of the colored fire department.

Rochester was first elected to the city council in 1890. He won by one vote with 114 votes over Rev. Boyden’s 113 votes.

Rochester was the first Republican councilman to be voted for the First Ward under the new town charter.

The First Ward is the largest of six, and most of its population is composed of colored people, according to The Advocate-Messenger. The group met at the rink (Fox Livery Stable on Main Street).

Rochester was injured twice while painting houses and once while he was a fireman.

He made a narrow escape while painting at the residence of Reed S. Nichols. The ladder slipped and he landed on the porch roof with a few bruises.

However, the bucket of red paint smeared on the residence where it was not needed.

“We do not wish anyone to infer Councilman Rochester was attempting to paint the town red.”

He was not as lucky while painting at the S.G. Broyles residence. He stepped on faulty scaffolding and fell some distance and hit the ground. He had painful bruises and was laid up a few days.

Rochester, who had attended school according to census records, wanted all children to get an education. Rochester was named truant officer for the colored school district in 1915.

“He has been making it hot for parents who fail to send their children to school.”

Under the law, children of school age cannot accept a job without the written consent of the school superintendent and not even then if they are less than 14 years old.

Rochester has found a number of young boys who are working and said the party who hires them is subject to a fine as well as the parents of the children.

He explains the law to parents saying it is one of the best laws in Kentucky as it not only keeps the children off the streets, but forces them to get an education.

Rochester has made a splendid record on school attendance by increasing the enrollment by a 100 at Bate School. He got 39 students to attend who had never been to school before.

The Advocate stated: “Arch is the right man for the job.”

Rochester also owned a saloon, according to the March 25, 1887, newspaper article.

“The marshal closed the saloon of Rochester upon replevin bonds amounting to $150.

“This place has been a source of trouble to authorities and the proprietors. Jo. Doram and Rochester have been before the court nearly every week for months.”

The newspaper called for the saloon to be closed for good.

On October 1886, a difficulty arose at the barber shop of Jo. Goins on Second Street concerning some Lodge business. Wright apparently drew a savage-looking razor and inflicted a dangerous wound upon Rochester.

The artery in his right arm was cut and Rochester would have bled to death had not a physician arrived to check the wound.

Wright was arrested and had been in court many times

“Rochester is a peaceable, inoffensive citizen and has the sympathy of the better class of his people,” the article stated.

Rochester was born in 1857, according to his death certificate. Mary Rochester, his second wife, signed the certificate. He was the son of Jordan and Sarah (Givens) Rochester.

The 1870 Census gives his age at 14 and lists him as a student, and living with his parents.

Archibald, 24, and his wife, Anna R., 22, and their daughter, Bessie, 3, were living in the same house on South Second Street with his parents in 1880. He was a painter and she was a seamstress.

His sister, Anna V., 23, and her husband, David Lankford, 35, and daughter, Mattie, also lived there.

In 1889, Archibald was granted a divorce from Anna, and he was given custody of their two children.

Jordan’s daughter-in-law; and granddaughters, Leila, 8, and Susie, 18 also were in the same household.

Archibald’s death certificate shows he was born in Kentucky and died April 17,1922.

An obituary in The Kentucky Advocate states Rochester was a life-long member of the (St. James A.M.E.) Methodist Church and was a Knight Templar.

“He was held in high esteem by all who knew him.”

Services were held at the AME church and burial was in Hilldale Cemetery.