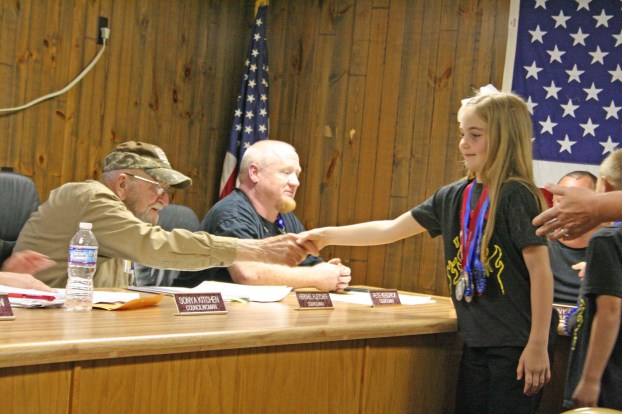 Kendra Peek/kendra.peek@amnews.com Junction City Elementary Student Marlee McAninch shakes hands with Council member Hershel Fletcher during Thursday's council meeting. McAninch was there with her Odyssey of the Mind teammates to present to the council, after securing a chance to compete at the World Finals in May. The council approved a $1,000 donation to help the students, who are fundraising for their chance to enter.

Groups will no longer be allowed to take up money at the intersection of U.S. 127 and Shelby Street in Junction City, after the council voted unanimously to no longer allow the act, which members called “dangerous.”

In the past, organizations such as the Masons, the Shriners and the AmVets have stood at the intersection collecting funds, Mayor Jim Douglas said.

“We could be liable,” Douglas said.

“You can do releases and that kind of thing, but you would have to look at those on a case-by-case basis, and still, I can’t assure you that you would be covered in every instance,” she said.

Douglas said he realized this would be a problem for some of the organizations, calling it a “very good” intersection.

Kendrick asked how often the requests come in, to which Douglas said, “it varies.”

Some groups come twice a year and some want to come on holiday weekends, he said.

“It’s open for discussion,” he said.

Council members agreed with his opinion and voted unanimously to “deny any future” requests to set up at the intersection.

•  Junction City Elementary’s Odyssey of the Mind team presented to the council after securing a chance to compete at the academic competition’s world finals in May. The council approved a $1,000 donation to help the students, who are fundraising to pay for their way to the competition, which will take place at Michigan State University.

• Fire Chief Cory Kitchen asked for the council’s “blessing” to spend the department’s annual allotment of $11,000 from the Kentucky State Fire Commission to replace some of the department’s hoses.

“We have several areas where 300 feet makes a difference in if there’s a hydrant or not,” Kitchen said, and explained that some of the current hoses are out-of-date, making them less effective.

“It becomes a liability on the city, and threatens firefighter safety,” he said.

Douglas said he would like to see an inventory and would “discuss” the choices with Kitchen.

• Dean announced plans to resign from the city, having been appointed as the Boyle County Attorney, as of April 1.

“It’s been a wild 11 days or so. One thing that I’m quite sure of is that I’m going to have to give up all of my side practices. That means that I’m not going to be able to serve as your city attorney any longer,” Dean said.

She commended the council for having “the best interest” of the city at heart.

“You don’t find that everywhere. I appreciate that,” Dean said.

Douglas thanked her for her work.

“I appreciate all you’ve done for us,” he said. 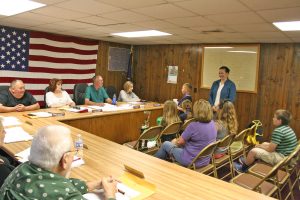 Kendra Peek/kendra.peek@amnews.com
Junction City Elementary Student Cruz King addresses the Junction City Council during Thursday’s council meeting. King was there with his Odyssey of the Mind teammates to present to the council, after securing a chance to compete at the World Finals in May. The council approved a $1,000 donation to help the students, who are fundraising for their chance to enter.Cruz King

Danville City Commission has reviewed the results of its grading process for community agencies that want city funding, but no... read more