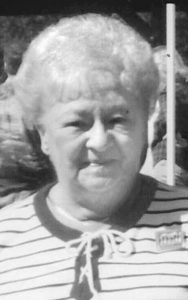 A native of Danville, she was the daughter of the late William Lackey and Mary Anna Beard Kavanaugh. She grew up in Danville and enjoyed the fond memories of The Hub as a young teen. She graduated from Greir School for Girls in Tyrone, PA and obtained her Bachelor of Arts in Education from Centre College and her Masters in Education from IUS in Bloomington, IN. She was four credit hours away from attaining her doctorate and principalship.

Following retirement, she worked at the Shelby County Chamber of Commerce as receptionist and event coordinator, where she greeted all with a smile. She then worked at Jefferson Community and Technical College in the Adult Education Program, helping countless individuals obtain their GED. She was very loyal to her employer and always staunchly supported the Shelby County Public School System.

Funeral services will be at 1 p.m. on Friday, April 28, 2017 at Webb Funeral Home, Shelbyville with visitation 4 p.m. to 8 p.m. on Thursday. Rev. Jay Hodge will deliver words of comfort, Rev. Jesse O. Baxter will assist and burial will follow at Grove Hill Cemetery.

Arrangements have been entrusted to Webb Funeral Home. Online condolences may be expressed at www.webbfuneralhome.com.