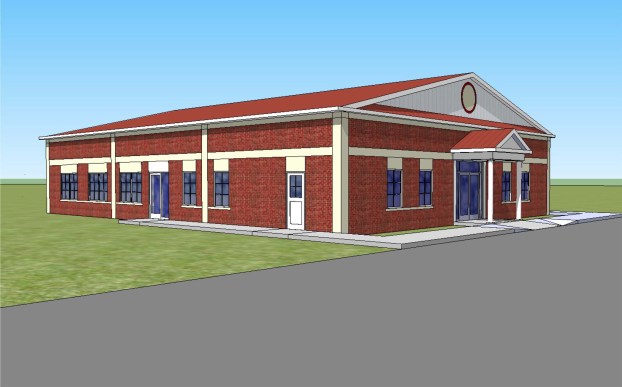 Photo courtesy of Campbellsville University Harrodsburg The rendering of the new building, slated to be open by January. Groundbreaking is expected to begin this summer.

Campbellsville University in Harrodsburg to expand

HARRODSBURG — In an effort to serve their growing student population, the Harrodsburg campus of Campbellsville University is adding a 4,500 square foot building, estimated to cost up to $500,000.

“We’re very excited about it,” said Wes Carter, regional director of development and church outreach at Campbellsville University, in his office in Harrodsburg, where he also teaches business administration and theology courses.

Currently, there are 163 full-time students at the Harrodsburg campus. Including part-time students, the number rises to about 190, he said.

“We’re out of space in the current facility,” Carter said. “Our student enrollment has grown by over 260 percent since the start of our first fall semester,” which began last August, he said.

“We want to have at least half of it raised before we break ground. Our goal is to break ground this summer,” he said.

With that in mind, Carter said they hope to have the facility operational by January, however, it could be earlier.

“They’re telling me it’s going to be a 90-day build. I think that’s fast, but I’m not going to argue with their timeline,” he said, adding that if that were the case, it could be open for classes by the second fall term.

Currently, the building has not been named, but “naming opportunities are available,” Carter said. 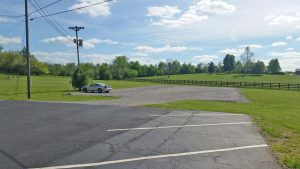 Kendra Peek/kendra.peek@amnews.com
A gravel parking lot behind the Conover Education Center on the Harrodsburg campus of Campbellsville University is the future home of the school’s new building.

It will be built where a gravel parking lot currently exists, behind the existing building and on property owned by the college. It will house an Academic Support Center, classrooms, a chapel and seven offices. Three additional full-time faculty, two academic support specialists and a basketball coach will be hired; their offices will be in the new building.

The building is part of a bigger expansion plan for the more than six acres owned by the college, Carter said, which includes a walking path around the property and buildings inside. 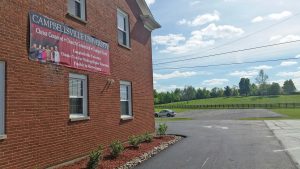 Kendra Peek/kendra.peek@amnews.com
A gravel parking lot behind the Conover Education Center on the Harrodsburg campus of Campbellsville University is the future home of the school’s new building.

“We don’t yet know what that looks like,” Carter said. “We want to be good stewards of everything we have here and do our best to promote and instill life change into the community through Christian higher education. Having exceptional academic support facility and staff, as well as state-of-the art facilities across the board, that will help sustain our ability to provide Christian higher education throughout Mercer County.”

The Farmers National Bank Walking Trail has been completed around the outside of the property and will be officially opened with a ribbon-cutting at noon on May 24. The path will be open to the public.

There are a variety of degrees and certifications offered at the college, including those in nursing, business administration, cosmetology, liberal arts, pastoral ministry, phlebotomy, pharmacy tech, and information and technology management. 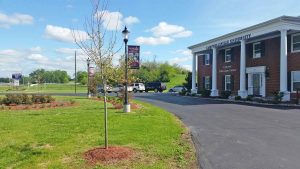 Kendra Peek/kendra.peek@amnews.com
The exterior of the Conover Education Center, on the Harrodsburg campus of Campbellsville University.

This fall, a 20-month welding certification will be added, and there are future plans for degrees in social work, education and criminal justice, among others.

From 10-2 p.m. Saturday, there will be a Community Day held at Campbellsville University in Harrodsburg, at the Conover Center, 1150 Danville Road, Harrodsburg.

There will be free haircuts, health screenings, T-shirts, a meal, and limited oil changes available.

Anyone is welcome to come, said Wes Carter, regional director of development and church outreach at Campbellsville University. The event is meant as a way to give back to the community for showing support of the college.

Leasing vehicles could save Danville $570K over 10 years

Danville expects to save more than half a million dollars over 10 years and stabilize its vehicle-related expenses by leasing... read more