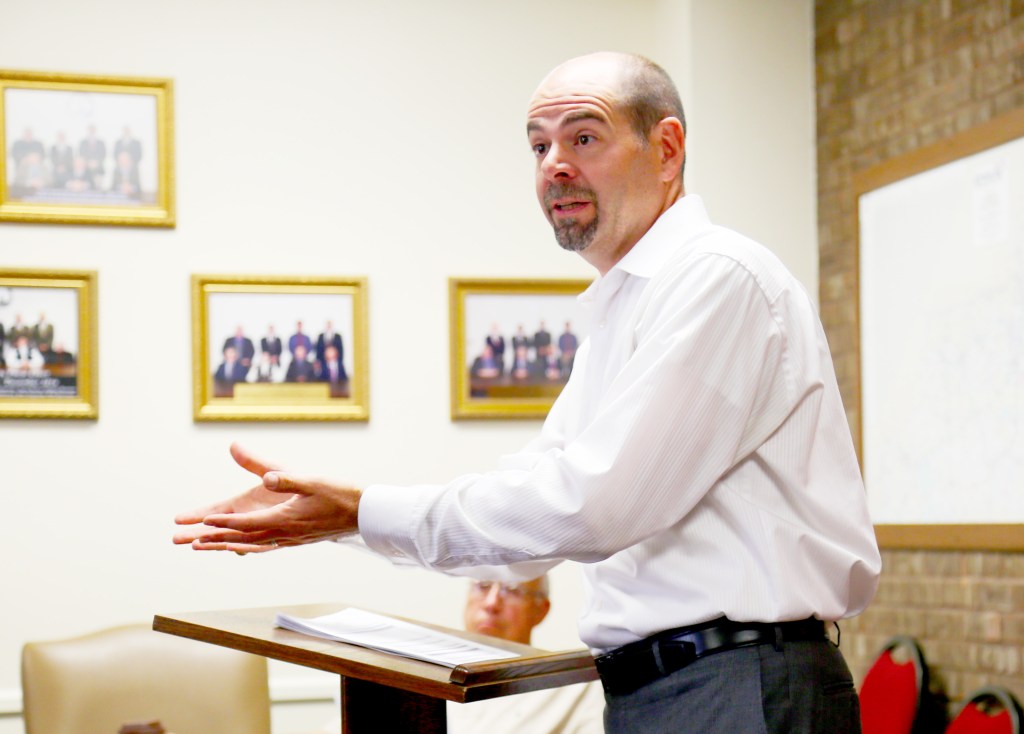 Editor’s note: This is the second part of a story about the meeting between the Boyle County Fiscal Court and strategic economic development consultant Kyle Talente on Tuesday morning. Read the first part here.

Prior to Tuesday night’s final public meeting on Boyle County’s strategic economic development plan, members of the Boyle County Fiscal Court held their own special called meeting to hash out some of their differences of opinion with the consultant hired to help create the plan, Kyle Talente.

As the lengthy and at times contentious meeting continued, the topic eventually turned to the Boyle County Industrial Foundation and Talente’s proposal to give it six voting seats on a reorganized economic development board of directors.

The proposed voting makeup of the board has been one of the most debated items in Talente’s working draft of the strategic plan, along with the proposal to hire a chief operating officer for the Economic Development Partnership.

Magistrate John Caywood asked Talente to explain why the Industrial Foundation should get six voting seats on a 20-member board when it’s also been said the organization will be “backing down” and “not taking as active a role as they have in the past.”

Talente said it’s because “those six people have the greatest knowledge of what we’re tasking the EDP to do.”

“To walk away from that … is being wasteful of talent, in my opinion,” Talente said.

Caywood pointed out that Jody Lassiter, who is currently the president and CEO of both the EDP and the Industrial Foundation, would become solely an employee of the EDP under Talente’s proposal.

“We’re still giving them the votes when the knowledge has moved over to EDP, and that’s where I’m struggling,” Caywood said.

“In my mind, that is the concession of them stepping away and addressing the larger community’s concern, which is ‘we don’t like the fact that the Industrial Foundation makes decisions in their board meeting that is not open to the public,’” Talente responded.

Talente said he is “trying to find a compromise that will bring everyone to the table.”

“Them being willing to step away and give over the reins of industrial recruitment is by far the greatest sacrifice any of the partners are making,” he said. “Even if that is the only thing that changes … their agreement to allow the EDP board to take that on, it is by far the greatest sacrifice any one of these groups is making for the betterment of economic development.

“I wanted to make sure it was done in a way that they felt confident and comfortable that the wisdom that their group collectively has (would not be lost).”

Talente added that his design plans for the eventual elimination of voting seats for the Industrial Foundation.

“The long-term strategy … ultimately is, at some point in time when everybody is playing nice together and we’re all comfortable with the structure, the Industrial Foundation becomes a transactional entity for the EDP that is a land-holding body,” he said.

If the city or county wants to buy a tract of land for industrial development, it can and then sell it to the “land bank” that the Industrial Foundation would serve as, he explained.

Magistrate Jack Hendricks said he “doesn’t have a problem with the voting part of it, personally.” That’s because he sees the Industrial Foundation as the biggest contributor to the EDP. The foundation contributes around $127,000, while the county contributes $110,000, Hendricks said. The City of Danville gives $145,000, but Hendricks said if you discount that amount by the $110,000 that flows to the Main Street program Heart of Danville, the city is only contributing $35,000.

(It’s not apparent from the EDP’s budget that the $110,000 for the Heart of Danville comes directly from the $145,000 provided by Danville. Instead, the Heart’s funding flows from the overall EDP budget and none of the EDP’s income sources are earmarked for the Main Street program.)

Talente said he also argues the Industrial Foundation is “one of the largest donors.”

“You can’t just kick them to the curb. They’re not going to agree to this if you say … you’re going to lose control, you’re going to be out,” he said. “Once again, the long-term plan is the Industrial Foundation becomes a subsidiary of the EDP and there no longer is Industrial Foundation ex officio (appointed by) positions because they just become six business at-large members.”

“I am setting the sunset for the Industrial Foundation, to be honest with you, which they understand,” Talente said. “I’m telling you — the linchpin of getting from where we are to the next step, which is addressing better representation for the public sector, moving all economic development under the EDP — is going to require providing some concession to the foundation.”

In addition to the six Industrial Foundation seats, Talente’s proposal calls for three seats each for Danville and Boyle County; one seat each for Perryville and Junction City; three seats for large donors to the EDP; and three at-large seats for business community members.

“The crux of the problem is you still have to have a majority private sector vote on the board if you want to keep their dollars at the table,” he said. “I appreciate that not everybody is going to be thrilled with this … but everyone has to give something.”

Magistrate then asked if the Industrial Foundation was the contact for economic development with the state. Lassiter said no — the EDP is.

“I’m an EDP employee; EDP is the contact,” he said.

“Here’s what I hear out there, Jody, and I’m hearing more of it,” Caywood said. “There is a perception out there that the Industrial Foundation — when there’s someone out there looking for land that is zoned industrial, that a private industrial real estate owner doesn’t get the same notice that the Industrial Foundation — it kind of competes with them, and they do compete with each other. They don’t get the same notice or the same opportunity. I hear that out there.”

Lassiter noted that Caywood has sat on the boards of both the EDP and the Industrial Foundation.

“We market and advertise third-party properties 75 percent of the time,” Lassiter said.

Judge-Executive Harold McKinney said he has also sat on both boards.

“I hear at EDP and I hear at Industrial Foundation — ‘if we can sell a piece of property, let’s sell it,” McKinney said.

“It all boils down to where the person wants to be, not where you want them to be,” Industrial Foundation Chairman John Albright chimed in.

Caywood said the perception he described is still out there.

Talente said he has a recommendation in his plan that will address that perception: creating a “unified, single property database of all available non-residential property in Boyle County.”

The EDP needs to work with all property owners with land for sale to develop the database and then market that database through the state and on local websites, so that “any prospect who shows up at the economic development website can click on ‘available sites.’ And it’s going to be everything from (a) quarter-acre, undeveloped lot here in downtown to the foundation’s X-number-of-acres available out at the industrial park.”

“Once we create that database, it completely eliminates any argument that you’re not marketing my property,” Talente said.

“Everybody wants to be on a level playing field,” Caywood said. “That’s what they’re asking for.”

“There are more private properties on the state database that we market than Industrial Foundation (properties),” Lassiter said. “It’s fact versus fiction.”

“You’re going right back to my point that I’ve been making through this process,” Talente said. “Which is engagement, education, communication needs to be improved. And if we want to do that, we need to have more people to be able to do that.”

“We hear from the citizens,” Caywood said. “I’m not too sure that the foundation and you folks do.”

“The folks decide who sits on this table, you all don’t” he said, meaning who is elected to the fiscal court. “And there’s a difference in how you have to think. I hope you understand that.”

“If the community can’t get behind the realities of how economic development is implemented … then shame on all of us for not (being) out there, championing that to them,” Talente said. “… And that includes the fiscal court of not going back and saying, ‘you know what? They do (market private land) — we know they do. Here’s the website.’ It’s as much our responsibility to know what’s going on and be able to address those perceptions. … You can’t ask one person to talk to 30,000 people.”

Talente said if someone approaches the fiscal court and “says, ‘I think it’s BS that the foundation or the Economic Development Partnership doesn’t market my land,’ it is on the six of you to say, ‘you’re actually incorrect about that; here is the correct information.”

“I appreciate that,” Caywood said. “… I’m part of this, so I’ll take responsibility. We’re not as involved as we should be. I’m going to say that as a court.”

“I’m about to lose a friend here and I apologize, but I’m going to speak candidly to you about that,” Talente said.

“The fiscal court was offered two seats on the working group” that has been working to develop the strategic economic development plan, he said. “… There has only been one county representative attending all my working group meetings,” referring to McKinney, who has been participating in the working group.

“I agree on the surface that we need to do a better job on communication as the EDP. Where you and I start to diverge is it is also on you, if you are that interested, to get engaged,” Talente said. “It can’t be a one-way communication street. If you want to know, Jody’s office is about 700 yards that way. OK? Any of you could have come and participated in the working group and heard all these conversations going on.”

Talente said he’s not trying to blame anyone.

“I’m saying it’s too much of an out to say, ‘we need to be communicated with better.’ I do agree with that, but you also need to take the responsibility of getting more engaged,” he continued. “… Any one of you had the opportunity to come and participate in this, and you didn’t.”

“I agree with you,” Caywood said. “… There’s elephants and donkeys in this room and we need to talk about these things and have an open discussion.”

At a special called meeting of the EDP Wednesday morning, McKinney said he thought Talente and EDP Chair Ben Nelson “did a really nice job with the fiscal court yesterday.”

“I just thought you did a really nice job covering everything,” McKinney told Talente.

“I appreciate that and hopefully that becomes part of the model of how we engage and communicate in the future,” Talente said. “It’s OK to ask hard questions; it’s OK to want to understand more. Education is the way you build consensus and the way you build support.

“I feel like if that’s the level of communication we need to move from ‘no’ to ‘yes,’ then let’s adopt that and embrace that and take that on.”