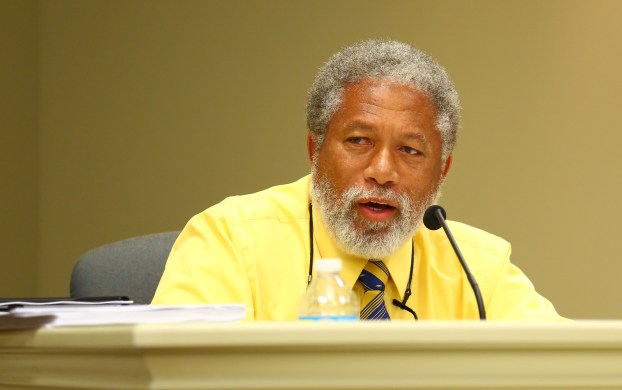 Danville City Commission did not finalize a pair of planned tax increases as was possible Monday night. Instead, they voted 3-2 to pass a new first reading that would implement a slightly smaller occupational tax increase. 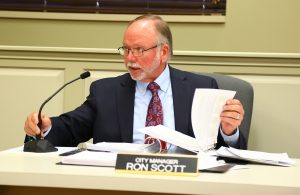 “Frankly, it was going to be a challenge to implement that in the next fiscal year,” Scott said, explaining the city and Boyle County already have a big project ahead of them in the coming fiscal year to complete a major upgrade to the 911 center’s technology.

The tax increases are projected to bring in around $2.2 million in new revenue, about $100,000 less than the $2.3 million previously anticipated with the 2-percent payroll tax rate, Chief Financial Officer Michele Gosser said.

Those revenues are planned to cover a number of projects city officials have identified as “essential” and “needs, not wants” — replacement of a bridge no longer rated for fire trucks; replacing the crumbling downtown fire station; purchase of a new ladder fire truck in order to maintain the city’s ISO insurance rating; and implementation of energy-savings upgrades, among other things.

Three people opted to comment before the city commission about the proposed tax increases Monday night, prior to the votes on the issue. 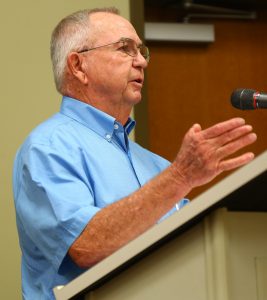 David Williams, owner of Burkmann Industries, said he doesn’t understand why the city is only addressing what it says are needs now, when officials say they’ve been problems for a while.

“It’s a mystery to me why some of these needs have not been identified and addressed by previous administrations,” he said.

Williams said he believes the city is trying to accomplish too many different projects at one time.

“I think the community, particularly the business community, is being asked to swallow an elephant because of all the simultaneous issues that our community currently faces,” he said. “In my business experience, we have the best outcomes if we conquer elephant-sized issues one bite at a time.”

Former Danville Mayor Bernie Hunstad said he believes a lack of economic growth is to blame for the situation the city is in. 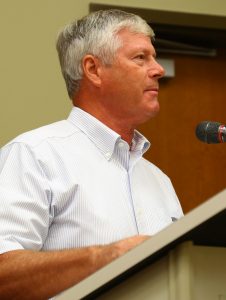 “If you go back to the early 2000, 2003, you see we still have not replaced the jobs lost from there until now — we’re still down nearly 3,000 jobs,” Hunstad said. “That’s your lost revenue. That’s the fire truck that didn’t get purchased, and the many other city items that are important and need to be done that we haven’t been able to accomplish.”

“You’re actually going to most likely make the problem worse,” he said. “… This is not helping us to attract and open up new jobs.” 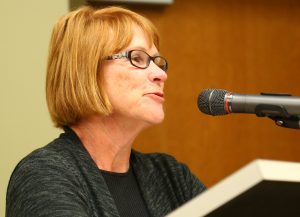 Chamber of Commerce Director Paula Fowler said she would keep her comments short as she had already stated multiple times previously her opposition to the tax increase.

“I know that you face major challenges, you don’t have easy decisions,” she said. “… I don’t think that raising taxes is the answer to that.”

Commissioner J.H. Atkins said during the meeting he had previously been in favor of the tax increases, but after asking for residents to give him their opinions and receiving a lot of input, he had changed his mind.

Atkins said he would like to see what city staff would present for a budget if there was no tax increase, and what the budget would look like with half as much of a tax increase.

Atkins said the budget doesn’t look much smaller at all after the proposed change to a 1.9-percent payroll tax rate.

“Here’s what you’re saying to me — I vote not to raise taxes at all, so I’m voting to close down the City of Danville. Are you saying that to me? I don’t think so,” Atkins said. “So if we only have the current income that we have right now, the commission has decided that, then the staff’s got to come back with a balanced budget that uses that money.”

Atkins later said the 0.1-percent smaller increase “doesn’t do much for the guy out there making $10 an hour.”

Commissioner Denise Terry said she doesn’t think she has heard from anyone who makes $10 an hour what they think about the tax increases.

Terry said she has heard two main themes from people she has talked to about the taxes: The city needs to “eliminate excessive spending” and “find alternative resources.”

“We have thrown those terms around, but no one has been specific,” she said, questioning “if anyone can go through this budget — which we’ve all been through it, staff’s been through it, we’ve been through it forwards, backwards, sideways — and find where there is excessive spending and tell me specifically what those things are.”

In order to move forward on the proposed budget or tax increases, the city commission had to pass first readings of both as separate ordinances. 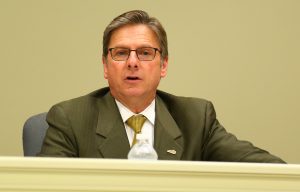 Mayor Mike Perros requested he be called first on the roll call votes. Perros, Terry and Commissioner Rick Serres voted in favor of the proposed budget and tax rates including the 1.9-percent payroll tax. Atkins and Commissioner Kevin Caudill voted against both.

Before passing first reading of the tax ordinance, Atkins proposed a “friendly amendment” that would have reduced the tax increases, setting the net profits tax at 1.5 percent instead of 1.75 percent; and the payroll tax at 1.75 percent instead of 1.9 percent. That amendment failed along the same lines — Atkins and Caudill voted in favor; Perros, Serres and Terry voted against.

Before the proposed budget and tax increases go into effect, they must pass second readings. Because the city commission does not have another regular meeting before the June 30 deadline to pass a balanced budget, a special called meeting is expected to be held at 8:30 a.m. Thursday.

The Danville City Commission plans to hold a special called meeting 8:30 a.m. Thursday in order to pass a balanced budget and enact an ordinance setting the net profits tax at 1.75 percent; and the payroll tax at 1.9 percent.

Fundraiser to benefit 2017 Back To School Block Party

An event to serve more than 5,000 people requires a lot of funding. That’s why Rashea Ford and Adrian Ogle,... read more