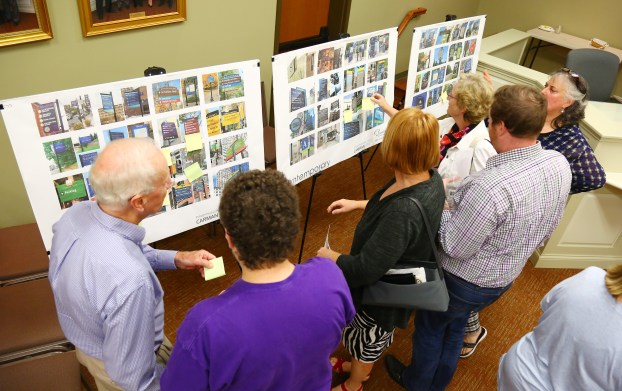 Ben Kleppinger/ben.kleppinger@amnews.com
Community members use sticky notes to vote for one of three different styles of signage that could be recommended in the city’s wayfinding master plan during Tuesday night’s forum.

More than 20 people, most from the arts and tourism communities, participated in a community forum on “wayfinding” signage in Danville Tuesday evening. It was the first of several public meetings planned as the city develops a wayfinding master plan that could guide an overhaul of all street signage in the city.

Overall, those who attended were supportive of developing a master plan, but they also expressed fears the final plan could downplay cultural and tourism-related locations that are closer to the interior of the city.

“Danville’s cultural attractions fear that we will not be properly represented in the signage initiative,” said Lori Kagan-Moore, founder and owner of The Great American Dollhouse Museum. “While it’s valuable to be signed on side streets close to our establishments — and that is important — it is also essentially that we be signed on the bypass, and that’s the area where there’s been some contention.”

Kagan-Moore said while sign space on the bypass is limited, she believes the small number of attractions in downtown Danville that would warrant signage make it possible for all of them to be included by name. She said she opposes “generic” signs that might point drivers to “museums” or “theaters,” because many experts say those signs don’t work.

“It is the specific sign that will draw me into a town,” she said, explaining that she and her husband drive through Texas regularly. “There are any number of generic little towns, little ‘historic’ downtowns, and I’ve never turned off the road for a ‘historic downtown,’” she said. “But the Janis Joplin Museum? There you go.”

Robby Henson with Pioneer Playhouse said most of the people attending the forum “have skin in the game” because attracting tourism is “our lifeblood.”

“I’m all for site-specific signs on the bypass,” Henson said.

Consultant John Carman told the audience he intends to take input from the local people who participate in the public forums and that input will influence the master plan’s recommendations.

Besides the opinions of local people, Carman will use data such as average daily traffic counts to reach conclusions.

Pushed for further clarity on if he would support signs for specific locations along the bypass, Carman said “I don’t know that I have a real strong opinion about that.”

Directional signs on state roads are highly regulated and usually cannot include more than three different destinations and three different directions, among many other restrictions, Carman said.

Community member Eric Mount said those who attended were focused on the issue of signs for specific attractions because they’re worried the sign spaces on the bypass could be used instead to point to industrial locations.

“Some of the proposals that I’ve seen or heard about have wanted specific signs about I guess every corporation that’s out in the industrial park or elsewhere,” Mount said.

City Engineer Earl Coffey joined the conversation to say that a map of possible sign locations recently generated by the Boyle County Industrial Foundation “has nothing to do with anything the city has done.” 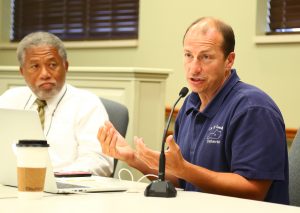 Danville City Engineer Earl Coffey said Tuesday that a map of proposed signs pointing to industrial locations is a “distraction” and has nothing to do with the city’s current wayfinding master plan proposal.

“It has nothing to do with the wayfinding initiative that we’ve discussed here,” Coffey said. “It has been tossed around as really a distraction to what the city is trying to do.”

Coffey said after the meeting that the city had already been working with “cultural folks” on permits for additional signs when they learned that “the Industrial Foundation or the (Economic Development Partnership) or whoever — they were on their own path for some signs.”

“The state said, ‘hey city, you’ve got somebody applying for a major permit; they really need to run that through you all. And to do that, you really need to do your wayfinding plan,” Coffey said. “The state basically said, ‘you all have too many signs now that are non-compliant, so we would love it if you would go ahead and consolidate your signs, do your master plan, then come back and talk to us and we’ll figure out how we can work together to implement that.”

Coffey said if the Industrial Foundation wants to have input on the wayfinding master plan, it would need to send people to participate in the public meetings.

“Unless they participate, we’re not seeking that out to resolve any issues they have,” Coffey said.

Carman gave a “wayfinding 101” presentation and collected some initial ideas from those who attended Tuesday’s meeting by asking them to all list the places they think should be considered for signage. Participants also voted on which of three different styles of signage they would most be in favor of — historic, traditional or contemporary.

Carman showed a preliminary map with potential “decision points” marked where signage might be appropriate. Those decision points can change as the plan is developed, he added. The decision points are mostly along the bypass, at major intersections such as Stanford Road, Hustonville Road, Lebanon Road, Perryville Road and Ky 2168.

Danville is paying Carman $27,000 to develop the master plan.

The next public meeting is expected to happen in about three to four weeks, Carman said. At that point, he will have some ideas about what Danville’s “family” of new signs might look like — but more time will almost certainly be spent on determining what destinations should receive signage and where the signs should be placed.

“I think an open dialogue and transparency is good,” Carman said. “… Sometimes I will have a small group of people that supposedly represent their constituency. I feel like in Danville, just kind of knowing the place, that whoever wants to be involved in this meeting — that becomes our committee.

Now that she’s created the right space for the project, the curator of The Great American Dollhouse Museum is ready... read more