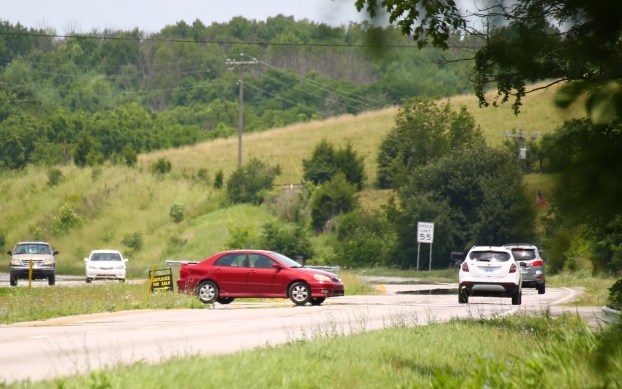 Ben Kleppinger/ben.kleppinger@amnews.com
A red Toyota turns left onto Chrisman Lane Thursday afternoon, after waiting for westbound traffic on U.S. 150 to pass. Local officials have pushed for years to have turning lanes added at the intersection, which they say is very dangerous without them.

Boyle turning lanes project ranks among most important in state

Boyle County officials have pushed for years to have the state add turning lanes at what they say is a very dangerous intersection along U.S. 150. Now, based on recently released rankings from the state, Judge-Executive Harold McKinney is optimistic those turning lanes may finally become a reality.

The intersection in question is east of Danville on U.S. 150, where Chrisman Lane meets the highway.

McKinney said without turning lanes, someone turning left onto Chrisman Lane has “a real opportunity to be rear-ended” because they may stop to wait while still at least partially within the regular lane of travel.

“Ever since I’ve been here, I’ve been pushing to get turning lanes,” McKinney said. “… If you ever do have an accident, it won’t be a fender-bender; it will be a very bad accident.”

Kentucky released its initial “SHIFT” rankings of all highway projects in the state in late June, placing the turning lanes project at 123rd.

McKinney said he is pleased with that ranking.

“That’s pretty high; that’s pretty good,” he said. “I think we’re going to get that done this year.”

At a March fiscal court meeting, Bret Blair, a KYTC engineer, told local officials the state is in favor of the project.

“We really like the project. We’ve always called it low-hanging fruit,” he said. “It’s not a very expensive project, but it’s a good project that will benefit a lot of people. The last couple of years, we’ve pushed it a lot. It just hasn’t gotten the love it deserves.”

The project is expected to cost $500,000. The state scored it 48.9 out of a possible 100 points. The top-ranked project is a $123 million widening of I-265 in Jefferson County — it scored an 81.8. The state evaluated more than 1,100 projects in all, and 239 of them made the cut to be included in the rankings. The bottom-ranked project is construction of a new interchange along the Cumberland Parkway in Russell County — that nearly $8.2 million project scored a 7.4.

The state ranking system is called “SHIFT Kentucky Ahead;” it is an effort to prioritize transportation spending based on data and to bring transparency to the funding process, according to the Kentucky Transportation Cabinet.

“The approach helps bring balance and dependability to Kentucky’s over-programmed Highway Plan that currently includes more than $6 billion in unfunded transportation projects,” according to KYTC’s information on the effort. “… SHIFT allows policy makers to see just how far down the priority list our limited dollars will go and which other projects could be funded if additional dollars are generated.”

According to KYTC, each project is scored based on its potential to:

• have a good cost-benefit ratio.

Now that KYTC has released the scores, the next step is to gather input from district and local leaders and further refine the rankings, according to KYTC. That’s scheduled to occur in July and August.

McKinney said there is a meeting scheduled for next Wednesday, July 12, when he expects to be able to provide input on the rankings.

“In the fall, KYTC will combine state and regional lists to produce a prioritized, balanced plan to send to the governor and legislators for consideration when developing the next highway plan during the 2018 General Assembly,” according to KYTC.

A timeline for the SHIFT project from KYTC plans for the highway plan to be enacted between January and April 2018.

KYTC estimates $2.6 billion will be spent on highway plan projects over the next six years.

Unlike the City of Danville, Boyle County doesn’t plan on raising any taxes this year. But according to its 2017-18... read more