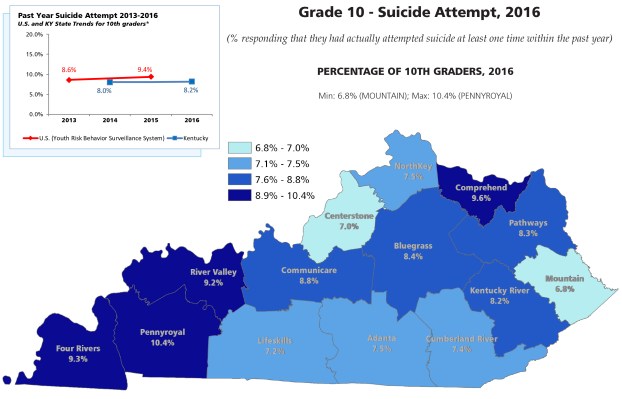 Poll: One in 12 Ky. 10th-graders have attempted suicide

A 2016 survey found that 8.2 percent of Kentucky’s high-school sophomores — about one in 12 — said they had attempted suicide at least once in the previous 12 months. That may seem high, but the national rate is even higher: 9.4 percent.

“We need to take that seriously,” Dr. Julie Cerel, a psychologist and professor at the University of Kentucky College of Social Work and president of the American Association of Suicidology, told Kentucky Health News.

The state is stepping up its efforts to prevent suicide among teenagers, said Patti Clark, the state’s suicide-prevention coordinator.

“Any number of students that attempt suicide is too many,” Clark said. “For us, that indicates that we have kids who have unidentified issues and they are not receiving appropriate care. They are not being connected to resources that can help them through the rough parts of their life.”

The biennial “Kentucky Incentives for Prevention” survey is given to students across the state in even-numbered grades starting in the sixth grade, but the official report says it only offers statistics from 10th graders, since these are the most likely indicators for high-school students. The survey primarily assesses alcohol, tobacco and other drug use, but also looks at suicide and other high risk behaviors.

The 2016 poll includes information from about 28,000 students in 149 of the state’s 173 public school districts, but did not include the state’s two largest districts. In addition to the Jefferson and Fayette county schools, Warren, Meade, Morgan, Laurel and Martin counties did not participate.

The survey found that 15.4 percent of Kentucky’s sophomores reported having suicidal thoughts within the previous year. The rate was higher in eight of the state’s 14 regions than it was in 2014, the first year the survey asked questions about suicide.

Beyond thinking about suicide, how many 10th graders made a plan about how they might kill themselves? 12.5 percent. The rate in seven of the 14 regions was higher than in 2014.

The statewide suicide-attempt rate of 8.2 percent was about the same as in 2014, but was higher in eight of the 14 regions. The highest rates were in three Western Kentucky regions: Four Rivers (9.3 percent), Pennyroyal (10.4 percent) and River Valley (9.2 percent) and a Northern Kentucky region comprising Bracken, Fleming, Mason and Lewis counties (9.6 percent).

Why do teens consider or try suicide?

Cerel said increased media information about suicide, both fictional and real, could be a reasons for the number of reported suicide attempts among the state’s 10th graders because this exposure “might make teens more likely to admit they’ve had these thoughts and experiences.”

She added that the state’s shortage of mental-health-care providers may also contribute to the number of teen suicide attempts in the state. The federal government estimates that as of December 2016, Kentucky had only 56 percent of the providers it needed.

That means many Kentuckians have to wait three to six months to see a mental-health-care provider, Cerel said, adding such a wait is a long time in the life of a teen who is sad or depressed — about one quarter of the school year.

“What does it mean for say a ninth-grade girl to be out of her peer group for three to six months because she is so depressed she can’t function? Everything moves on past her,” Cerel said. “So kids just aren’t — all Kentuckians, actually — aren’t getting access to appropriate mental-health services that could really lead to decreased suicide.”

Cerel said the provider shortage is even worse for teens because many providers and pediatricians are reluctant to use medications to treat young people who are depressed. The American Association of Suicidology, which Cerel heads, says depression is present in at least half of all suicides.

Cerel also suggested that the state’s opioid epidemic has likely played a role in the number of Kentucky’s teens who have attempted suicide: “I would assume that that would be highly correlated.”

What is Kentucky doing about it?

Clark said the state requires all middle- and high-school students receive some type of suicide-prevention information by Sept. 1, and every teacher or otherwise certified employee is supposed to participate in at least two hours of suicide prevention training every school year. But the implementation of these programs vary from school to school, she said.

Clark’s office is rolling out a new suicide-prevention program called “Sources of Strength” in 100 schools across the state in the fall. She said 60 schools have already signed up to participate.

The Sources of Strength website says it is an evidence-based program that builds resiliency to suicidal thoughts, and touches on related issues such as substance abuse and violence through peer-led messaging campaigns that focus on “hope, help and strength.”

“The thing about Sources is that it is peer-led, so it becomes the student’s process,” Clark said. “They get to make the change. Evidence does show that peer-led programming done correctly — meaning that the kids are not just a seat at the table, but they are truly given the power to do what they need to do and are equipped to do it in the right manner — really can make a difference … We are excited about where this can go.”

The state suicide-prevention program already provides technical training and assistance to schools with evidence-based programs, Clark said, as well as “gatekeeper training,” which teaches people in the community how to recognize the warning signs of suicide and how to get help for someone in crisis.

Clark’s office also runs the “Kentucky Initiative for Zero Suicide” program, which trains mental-health-care providers — both practicing and those who are still in school — how to assess, treat and prevent suicide.

Clark said she and her staff don’t know why so many Kentucky students contemplate, plan or attempt suicide. In a search for answers, they have scheduled meetings with in-patient psychiatric nurses and conducted a series of focus groups with directors of local schools’ Family Resource & Youth Services Centers to find out what students are telling them about it.

“We are looking at ways to increase our data, to increase our surveillance opportunities, to find that information so that we can target our prevention efforts,” Clark said.

What can parents do?

Cerel said parents should not hesitate to tell a child they are concerned about them if they think their child is contemplating suicide, and offer to get them help. She said family resource center staffs, school counselors and pediatricians are great resources for both kids and parents.

“I think they cannot be afraid to ask directly about it,” she said. “Say, ‘I’m really worried about you; are you thinking about killing yourself?’ It’s not like that is going to put any ideas in anyone’s head.” She said there is “absolutely no evidence” to support that mistaken belief.

Clark said that it’s important for parents to store firearms separately from ammunition.

“Especially for youth, the time from the decision to die to actually attempting death may be as short as five minutes,” she said. “If there is enough of a barrier between that child and that weapon, you may have the opportunity to save that child’s life. So simply storing your gun and your ammunition separately could make a big difference in those numbers.”

Suicide is the second leading cause of death among Kentucky’s teens and young adults, according to the American Foundation for Suicide Prevention.

Experts say these are warning signs of suicide:

• out-of-character behaviors, including changes in sleep habits or appetite;

• increasing the use of alcohol or drugs;

• a loss of interest in the things one cares about;

• visiting or calling people one cares about;

• setting one’s affairs in order; and

If you have any of these warning signs, or someone you know is exhibiting any of them, help is available at the National Suicide Prevention Lifeline at (800) 273-TALK (8255). Another resource is the Crisis Text Line: Text HOME to 741-741. 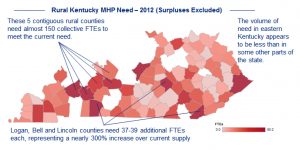