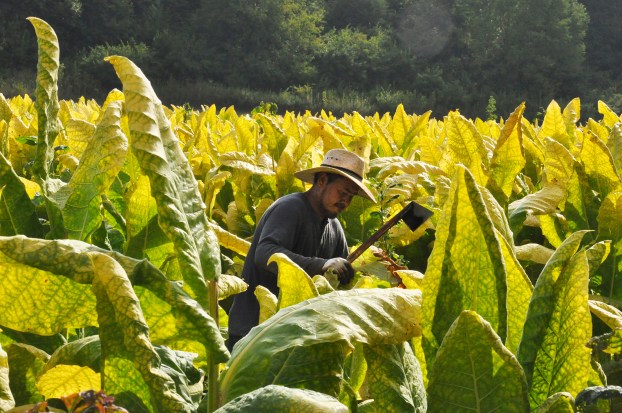 Despite the heat and humidity Thursday morning, Leones Torres wears long sleeves, a hat and gloves for protection while chopping tobacco.

Tobacco cutting season is here, even though many may not realize it — there seem to be fewer and fewer tobacco fields easily seen from country roads.  Randy Ensley, who owns more than 100 acres on U.S. 150, between Danville and Stanford, said this is the first time in 15 years tobacco has been raised on his property. Even though he leases the fields to another big tobacco grower, Ensley said he enjoys watching the crop grow, and the sweet smell of the yellowing plants. Ensley said workers started in May by plowing fields several times before planting the crop, then weeded the rows by hand at least twice and sprayed the fields. Ensley said the workers started cutting the crop on Monday and would probably be finished by today. “They really started ripping it up,” he said.

Despite the heat and humidity Thursday morning, Leones Torres wears long sleeves, a hat and gloves for protection while chopping tobacco.

Several acres of cut tobacco are ready to be loaded onto wagons and into barns for drying on the farm belonging to Randy Ensley off of U.S. 150 in Lincoln County.

Golden leaves of tobacco are ready to be cut.

Pacu Fuentes walks through a row of cut tobacco.

Pacu Fuentes concentrates on cutting and staking the tobacco plants as quickly as possible.

A Lexington man was killed in a motorcycle crash at about 9 p.m. Thursday night on Ky. 52 near the... read more