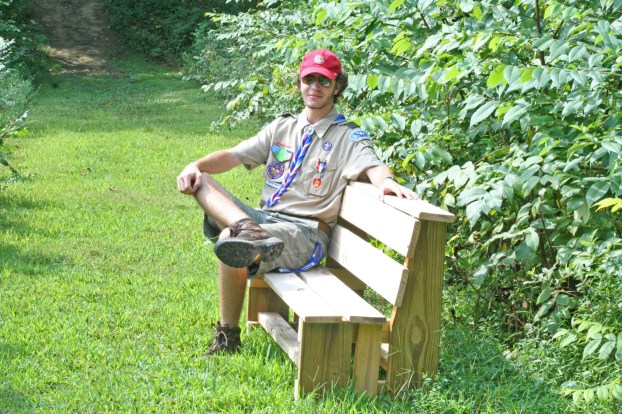 Kendra Peek/kendra.peek@amnews James Schiavone, sitting on the bench he made as part of his Eagle Scout project at the Central Kentucky Wildlife Refuge.

Those visiting the Central Kentucky Wildlife Refuge will notice a few improvements around the facility, projects completed by an Eagle Scout in Lincoln County.

James Schiavone, 18 of Lincoln County, stepped in for his Eagle Scout project to complete the work, and give back to a place he loves for the “serenity.”

“When I came out here the first time, I really loved it out here,” Schiavone said.

“It kind of feels isolated out here, doesn’t it? I mean, you go from the really busy Danville — I work in a parking lot with all the traffic and yelling people. It’s kind of nice to come out here and enjoy the cicadas, and the warm weather, the trees. It’s very peaceful.”

He scouted the refuge and Millennium Park, as well as other places, before settling on his Eagle Scout project: Schiavone made three benches for the refuge, placing one near the pond. He made 12 bird boxes and scattered them around the refuge, replacing the nearly-rotted ones and giving birds a new placed to stay. He also made a sign for the Bluebird Trail, carved a bird onto it and painted it.

Smiling, he said he was surprised that the sign looks pretty good.

“Walking these trails out here, you realize, man, there’s no where to sit down out here when you’re exhausted,” he said. “I noticed the bird boxes were all in really bad shape — so rotten, if you touched them they would fall apart.”

He said he was grateful for Ben Miles, the land manager at the wildlife refuge who talked with him as he gathered project ideas and built plans.

“We had a lot of meetings and coming out here walking,” he said.

Schiavone said he had considered other projects at the refuge, like updating more of the signage, for example, but found out they were getting a grant to help with that problem.

When trying to obtain the rank of Eagle Scout, a scout has to plan and complete the project first, a project that does something to benefit the community and, if possible, benefits the environment, Schiavone said. That’s why he included the bird boxes, too. It’s also important that there is a commitment of time and physical labor.

“It’s Its just looking around, making sure everything’s in order, seeing what you can do to help out.”

Throughout the project, Schiavone said scouts have to keep up with everything they’ve done on their projects, including a log of all the thoughts had about the project.

“It takes a big commitment on the Scout’s part,”  he project

After completing a project, a scout has to take his efforts before the members of the Boy Scouts of America Blue Grass Council.

“It’s very stressful,” Schiavone said, exhaling deeply. “You walk into this room and you have to sit in front of all of these men who are elders, fellow Eagle Scouts, who are members of the council. They have to judge you by asking you questions about what you have learned from scouting and what you plan to do with your future and how you apply scouting to your everyday life.

“If they think that you are worthy, they will grant you the rank of Eagle Scout.”

When his family moved to the area from Tennessee about seven years ago, Schiavone joined the Cub Scouts. He worked his way through the program, “graduated” and became part of Boy Scout Troop #119, which meets at Sts. Peter and Paul Catholic Church.

“It’s a good troop, good members, and lots of good leadership,” he said.

Each scout in the troop is given a position; Schiavone is a troop instructor, which means he helps introduce new concepts to the scouts and demonstrate those.

“It’s a lot of working with younger kids,” he said.

He’s also part of the Order of the Arrow, a “V.I.P. offshoot of the Boy Scouts.”

Schiavone said there’s a lot of service work involved and it can be hard to pass the initial process, but one of the freedoms is the ability to add an patch to the pocket flap — his features Shrek, part of a much larger inside joke in their troop.

His patches also include the troop number; a leadership training patch after a three-week course taken at Camp McKee in Jeffersonville, Kentucky; and the Life Rank patch, that just before the rank of Eagle Scout.

“You don’t take (the Life Rank patch) off the uniform. You don’t put the Eagle Scout patch on your uniform, you put it on display,” Schiavone said.

Outside of Boy Scouts, Schiavone was involved in competitive shotgun shooting with a group based in Nicholasville. He still participates sometimes, but said he hasn’t been able to do that as much since starting his job. He currently works at the Walmart in Danville as a cart pusher, which he said allows him to be outside.

Schiavone also really enjoys fishing, and says he’s into nerdy-type movies. His favorite is “Jurassic Park,” and he’s even added the decals to his Jeep.

“’Jurassic Park’ was always my favorite childhood movie. I remember watching it when I was six-years-old on a VHS tape. I was blown away by that Brachiosaurus, that first dinosaur they saw … Ever since then, I’ve just been obsessed with it — I love those movies. They’re my childhood,” he said.

“I realized, ‘Hey, I have a Jeep. Why don’t I get those little two emblems for either door?’ Why not? People like them.”

He has been homeschooled, but also attends AP classes in English, Calculus, Economics, Debate and Art History at the Bluegrass United Academic Center program in Lexington, driving to the campus twice a week.

Schiavone lives with his parents, Robert and Debbie Schiavone; and has a sister, Kelsie, who is attending Sewanee: The University of the South; and a step brother, Matthew, who is in the United States Navy.

Someone else Schiavone said he has to give thanks for is Kaleigh Marmino, his girlfriend, who lives in Cynthiana.

“She’s been a pretty big help to me,” he said. “To be, she’s been a very big inspiration and a motivational figure. I wouldn’t have able to get as far as I did without her.”

The plan to use a natural gas pipeline that passes through Boyle County to transport fracking byproducts may soon clear... read more