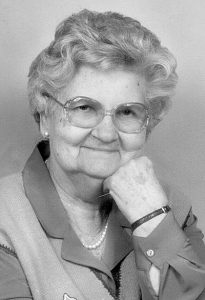 Lydia Melton Gilliam, 95, of Stanford, KY passed away Wednesday, September 6, 2017 at Landmark Of Lancaster in Lancaster, KY. She was born October 7, 1921 in Laurel County, KY, a daughter of the late Lewis and Roetta Karr Melton.

Known as Grannie to all who knew her, she was a member of the Neal’s Creek United Methodist Church until its closing and then became a member of the Hebron Lakeside Church. She was employed by Corning Glass Works in Danville for more than 20 years. She was faithful to her church, her job & her family as long as her health permitted. She loved traveling and visited Hawaii, Mexico, many European countries, the Holy Land, and often traveled with local groups.

Visitation will be Sunday, September 10, 2017 from 5-8 pm at Spurlin Funeral Home Chapel, Stanford. Funeral service will be 11 am Monday, September 11, 2017 at the funeral home with Pastors Robert Camenisch and Jeff Bramley officiating. Burial will follow at Buffalo Springs Cemetery in Stanford.