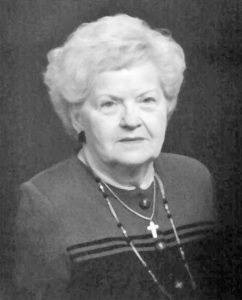 She was born September 17, 1924, in Jeffersonville, Ind., to George and Caroline (Young) Heuser. Her brothers were George and Charles Heuser. She was a resident of Louisville, KY for many years before retiring to Fancy Farm, KY with her husband, Joseph Carmon Curtsinger, Sr., who preceded her in death.