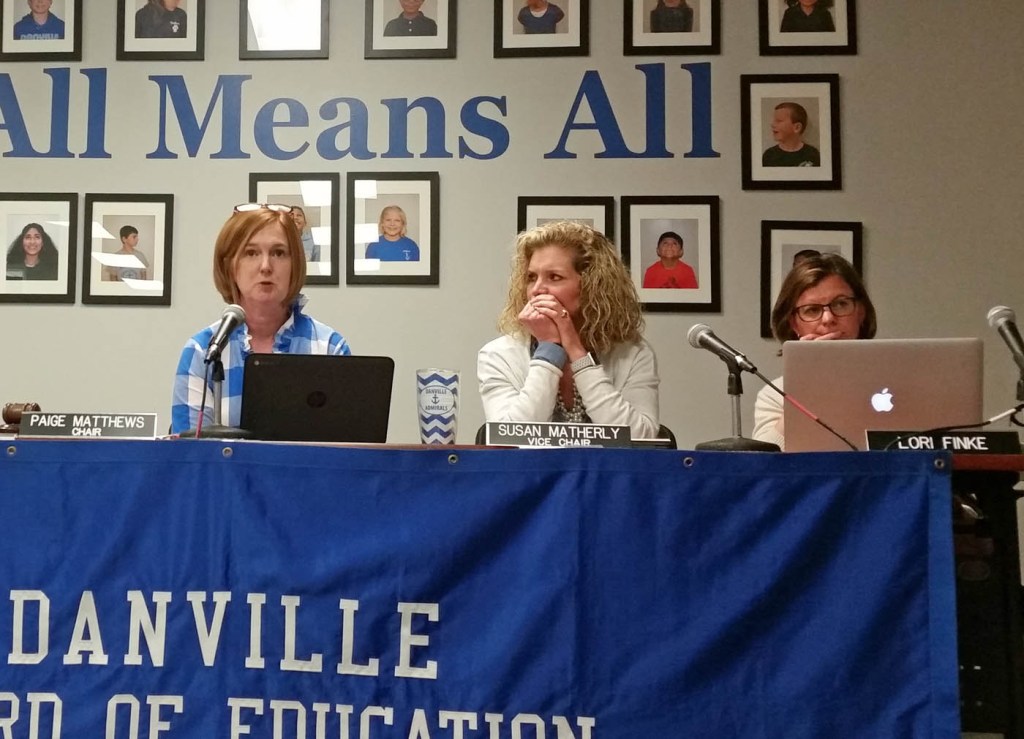 Kendra Peek/kendra.peek@amnews.com On Feb. 19 Danville School Board Chair Paige Matthews, left, expresses her thoughts on voting to not renew the contract of Superintendent Keith Look. Matthews, along with members Susan Matherly, center, and Lori Finke, right, voted to not renew his contract at the board meeting Feb. 19, instead listing a vacancy in the district. Board members Steve Becker and Troy McCowan voted against the vacancy, casting support for Look remaining.

Danville’s school board voted 3-2 against renewing Superintendent Keith Look’s contract Monday night. The decision was made before an overflow crowd and after listening to parents, staff and community members speak for more than 45 minutes about Look.

Board Chair Paige Matthews made the motion, followed by a second from board member Susan Mattherly, to announce the district would have a vacancy in the superintendent seat as of July 1. Member Lori Finke voted in favor of the removal, while Steve Becker and Troy McCowan voted against it.

Matthews said the decision “was not made lightly.” 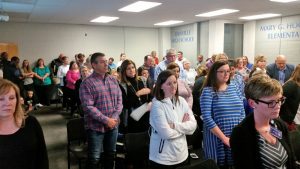 Kendra Peek/kendra.peek@amnews.com
Community members, parents, teachers and staff filled the room Monday night, those in support of Superintendent Keith Look standing at one point. A fraction of the room did not stand, expressing their discontent with Look. The room was also standing room only in the very back, spilling out into the hallway.

“As a board, we have spent the last few months hearing, not only from teachers and staff, but also from parents, community members and even students. Many of you have reached out via email, some have spoken at board meetings; we also have received many phone calls. And I want to say, many phone calls from those that weren’t comfortable sharing their thoughts in public,” Matthews said. “However, at the end of the day, I know that I have taken all of the facts into consideration and I will make the best informed decision that I can.”

Of the parents, teachers and community members who spoke, seven were clearly casting support for Look, three were clearly in favor of his removal, and two others expressed complaints not directly involving Look.

Respective portions of the audience, which spilled out of the room and into the hallway, clapped and cheered after those speaking.

Matthews said the board appreciated that “Look and his team has carried out the plan for the elementary redesign that was laid out by the previous board and administration.”

“He has also established a great team that will lead our district in the years to come. However, when looking at the overall vision, mission and future of this school district, I have concerns as to whether he is the best fit for Danville Schools.”

Matherly and Finke echoed some of Matthew’s concerns. Becker and McCowan disagreed. 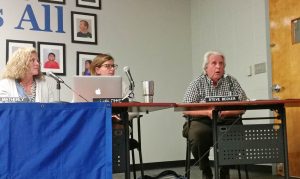 Kendra Peek/kendra.peek@amnews.com
Board member Steve Becker, right, expresses support for Superintendent Keith Look. Becker, along with board member Troy McCowan, voted against a measure to remove Look, while Board members Paige Matthews, Susan Matherly, left, and Lori Finke, center, voted to remove him.

“As a board, we can’t take credit for all this. As a board, though, we can take a blame on a lot of the misgivings that are going on with Dr. Look, because we’ve never really been clear with him,” Becker said. “… When you don’t communicate with the main partner — he didn’t fail, we failed. This isn’t the only board that has failed him; it was the previous board that did the same thing. I’m not quite sure how we can justify letting the man go when we failed as a group of individuals. People do not fail in their jobs by themselves … If you do not offer assistance, confidence and help for that person to succeed, we failed.”

Becker said he thought Look needed more time, and that the board hadn’t given Look a plan of growth.

“I do think we have an opportunity here to steer this ship where we need to go. I think we’re getting there.”

Becker said he felt dismissing him went against what the community was about.

Matthews pointed out that an evaluation had been given each year.

“I want to be clear, there was an evaluation given. There were areas that needed that improvement,” she said. “Those areas were discussed with Dr. Look. I don’t want everyone to just think there was nothing done.”

The last board member to speak, McCowan, agreed with Becker’s sentiments that he felt Look deserved more time. He also said the district has to be able to come together.

“When we bring anyone on, it doesn’t matter whoever it is, we need to set them up to succeed, as a community. We’ve got to start getting behind each other. We’ve got to stop pointing fingers … We have to start coming together,” he said. “He’s got his flaws. We all do.”

McCowan said the district was a great school, but “to people on the outside, we look foolish.”

“We look foolish … We’re not together. Parents, teachers, all of us, we’ve got to come together as one,” he said. “If we want this school to thrive, we’ve got to come together as one. Support each other and stop tearing each other down. If that’s all we’re going to do, this school is never going to rise up … In some instances, I think we have failed.”

After the meeting, Look issued a statement via email.

“I am proud of the work staff and students continue to achieve in the Danville Schools. The richness of talent, strength and interest makes every day unique and rewarding. Without question, the future of Danville students glows. Colleagues around me have set new standards that future ones will have to live up to — and that is going to be a monumental task for them. I am appreciative of the opportunity to lead and lessons learned. As always, we lift as we climb.”

Board attorney Vince Pennington told the board members that the Kentucky Schools Boards Association assisted in the previous superintendent search, following the resignation of Carmen Coleman in 2014, and might be able to assist in the new search.