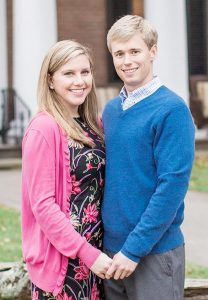 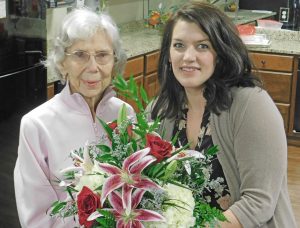 Morning Pointe of Danville residents are getting ready for spring. The seniors at the personal care and Alzheimer’s memory care community welcomed Bethany Weddle, right, from Danville Florist to join in on some floral fun. At the end of the day, O’dell Hines, left,  was named as the door prize winner, taking home a bouquet arrangement from the company.

Morning Pointe partners with local businesses and organizations to spend quality time with the residents as part of the life enrichment and Meaningful Day(tm) programs. 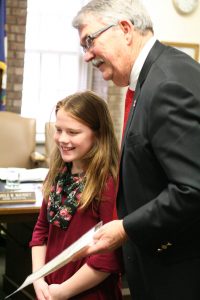 Kendra Peek/kendra.peek@amnews.com
Emma Taylor, a student at Woodlawn Elementary School, takes a photo with Boyle County Judge-executive Harold McKinney. She was named an honorary magistrate on Tuesday, after leading the meeting in the pledge of allegiance.

Emma Taylor, a student at Woodlawn Elementary School, takes a photo with Boyle County Judge-Executive Harold McKinney before a recent fiscal court meeting. She was named an honorary magistrate, after leading the meeting in the pledge of allegiance.

Feb 15 – A boy, Luke Hudson Baker to Taylor and Jacob Baker of Stanford. A boy, Roman Henry Allen Schmiers to Tiara Gooch and Brandon Schmiers of Stanford. A girl, Ella Bea White to Leigh and Adam White of Harrodsburg. A girl, McKayla Leighann Long to Danielle and William Long of Hustonville. A boy, Easton Kade Burgess to April and Rudy Burgess of Harrodsburg.

Feb. 21 – A boy, Graham Christian, to Carrie and Steven Wiley of Harrodsburg.

Feb. 22 – A girl, Jane Louise, to Diana and Shaun Clark of Harrodsburg. A girl, Zimal Eimaan, to Tahira and Mohammad F. Shahzad of Danville.

Feb. 24 – A boy, Jonah Jaxx, to Samantha Bartleson and Joshua Gunkel of Danville.