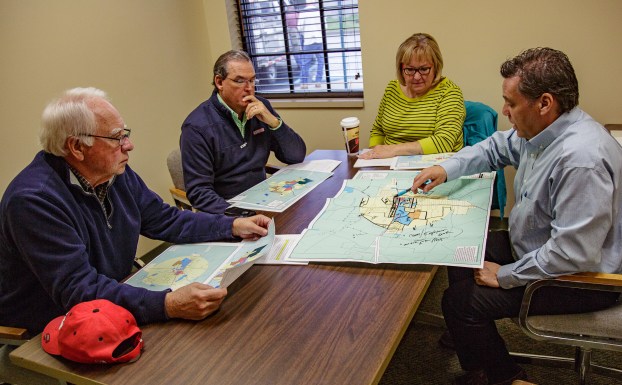 When Danville-Boyle County Planning and Zoning considers amending its future land use map for Perryville, it will have an opportunity to make some broader changes to its comprehensive plan as well.

P&Z Director Steve Hunter presented a proposed amendment to the comprehensive plan, including Perryville’s updated future land use map, to the newly formed P&Z Advisory Committee this week. Besides adopting the Perryville map, the amendment would provide a new way for developers to pursue zone changes that would help maintain and improve the integrity of future land use maps around the county, Hunter said.

Future land use maps, or FLUMs, designate land in different categories based on what the planned use is for the land in the future. They are separate from actual zoning, which determines what land can be used for right now.

Hunter told Advisory Committee members Jeffrey Baird, Susie Kelly and Jerry Leber the current comprehensive plan, adopted in 2017, does not provide a straightforward way to update FLUMs. That means when a developer wants to build something that doesn’t conform to current zoning or what the FLUM says the land should be used for in the future, there is no local procedure to let them ask for a change to the FLUM. Instead, developers have to essentially override the whole system by making a “major changes argument” — that something about the area or economy has changed so substantially that the FLUM should be ignored, Hunter explained.

This exact scenario happened recently when IJW Whiskey chose a Lebanon Road location as a site for a future distillery. The land was not zoned properly to allow a distillery, and the FLUM for the area didn’t call for the land to become industrial in the future. The P&Z Commission wound up approving a zone change for the land after a “major changes” argument was drafted in support of the project.

The comprehensive plan amendment Hunter is proposing would create a new process by which developers could apply to have a FLUM changed to match what they want to do.

“You don’t want developers to take that ‘major changes’ end-around when they’re not in compliance with the map,” Hunter said. “You want them to follow the map, and if they’re not in compliance with the map, then ‘amend the map, Mr. Developer. There’s a process — you amend the map and prove to us your project is compatible and then we’ll approve your zone change.”

Hunter said the amendment would set “a high bar” for allowing changes to FLUMs. A draft of the amendment lays out three reasons a FLUM change would be approved:

• for a project with a “demonstrated overriding public benefit” such as an influx of jobs or “a major public facility or amenity;”

• to correct a mapping error; or

• when “the proposed use is clearly compatible with existing surrounding development” and the applicant provides a “compatibility assessment” backing up that claim.

“This is modern planning stuff. This isn’t new,” Hunter said. “Most communities amend their future land use maps procedurally.”

Baird said he thinks the new process could work “if your map is good to begin with.”

Hunter agreed the integrity of FLUMs is important. Allowing changes to the FLUMs will keep them in-step with real-world changes, he said.

Baird said he thinks the process seems fair because “we don’t always get it right.”

The proposed amendment would also create new requirements for developers to provide development plans when they apply for zone changes. Those plans would include things such as “traffic impact studies” and, for industrial projects larger than 20 acres, a “detailed geologic analysis to determine the carrying capacity of the underlying soils with respect to the possibility of accidental spills of hazardous materials and impacts on ground water.”

The Advisory Committee was in agreement with providing the proposed amendment to the full P&Z Commission for review at the March meeting, then giving the commission members a month to consider the amendment before bringing it back for consideration in April.