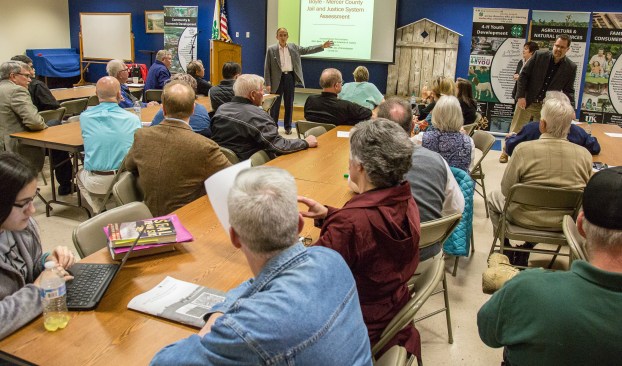 Public input: many Boyle-Mercer inmates shouldn’t be in jail

Jail consultant Dr. Allen Beck visited Mercer County Tuesday with the same purpose he had on Monday in Boyle County: to “see through everybody’s eyes” who live in the area served by the Boyle County Detention Center.

What Beck heard from a majority of the 30 or so people gathered for the public input session was that there are too many people in the jail and the criminal justice system isn’t doing enough to rehabilitate inmates and break the cycle of recidivism.

Beck and a handful of other jail experts with Brandstetter Carroll were hired by Boyle and Mercer counties to conduct a study of the local jail and provide a plan forward for controlling costs and overcrowding. He came into the meeting with a similar perspective to many in the audience:

“There are a lot of people that come to jail who have serious offenses. For the safety of the community, we need to do something,” he said. “But what you need to keep in mind is that about nine-10ths of the people who go to prison, they come back … they may spend some time in jail, be put on probation … but they’re back in our community — they are us, among us. And how we deal with members of our community will affect our own well-being.” 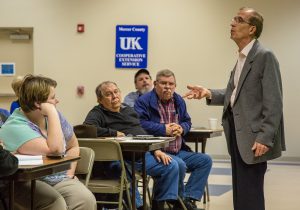 Beck said he has a lot of experience in turning jails around, but he can’t just give out solutions — he first has to get to know the community, understand the problems and analyze which solutions would work best.

“That’s why I’m not going to tell you all the problems tonight — because I don’t know them,” he said.

Instead, after providing a primer on jail terminology and the methodology of Brandstetter Carroll’s study, he asked the audience to provide their own perspectives on the jail.

Early on, Mercer resident Michael Conover got the attention of many by asking why an estimated 65 percent of the jail’s population consists of people charged with contempt of court, and another 25 percent of inmates are being held for failure to pay fines.

Conover, who practiced law for 54 years, said financial bonds keep a lot of people in jail because they can’t afford to pay.

“I always looked at bonding as something to secure somebody’s presence in court the day of their trial,” he said. “But now our judges seem to think they have to micromanage everybody’s behavior before they’re even convicted.” 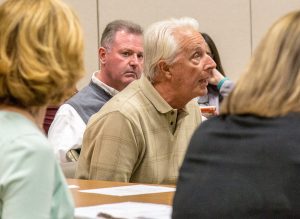 Mercer resident Michael Conover questions why there are so many inmates in the Boyle County Detention Center being held for contempt of court and failure to pay fines. (Photo by Ben Kleppinger)

Conover said there is a law in Kentucky that allows fines to be exonerated if someone is too poor to pay them, but he never sees judges using that law to forgive fines; instead, poor people wind up in jail.

“Our judges routinely will have somebody arrested for not paying a $100 fine and then the county will watch them sit in jail and cost the county $1,000,” he said. “It’s like we’ve got the Looney Toons deciding who goes to jail and when to let them out.”

Conover brought up the fact that local judges’ offices have so far not participated in Brandstetter Carroll’s jail assessment process — a fact others have previously also been critical of.

In November, as Boyle and Mercer counties were forming a criminal justice coordination council as part of the assessment, Boyle County Treasurer and Deputy Judge-Executive Mary Conley said she had asked Circuit Court Judge Darren Peckler if local judges would participate.

“He said he wouldn’t allow (local) judges to serve, but I told him I would like to keep them in the loop,” Conley said at the time. “… He was pretty adamant that there would be no (participation) … he thought it was putting he and his office in a possibly litigious situation, that if something happened that he didn’t want to have to be sued and be sitting on a committee that could get sued.”

Conley said Peckler issued a “blanket” directive for all local judges’ offices not to participate in the coordinating council.

At Tuesday’s meeting, Conover said that decision did not sit well with the public.

“The judges are ordered not to participate in anything that could improve the system, when to all of us out here in the public, it looks like they’re the problem in the system.”

Beck said Conover clearly has a valuable “insider’s view” of the system and he would be following up with Conover for further interviews.

Beck said after the meeting he also hopes to be able to interview local judges as part of his process of gathering input and data.

“This time last year, they flooded our local jail with so many people that they had to have permission to go to a potty and they couldn’t go unless they could get somebody into the room to take them,” Conover said. “We treat animals in zoos better than we treat people in jail. It’s criminal what we’re doing to our own people.”

“We have concerns about the system,” Beck responded, receiving several affirmations and a “that’s right” from the audience. “We have some serious concerns. I will do my very best to listen, to make it easy to understand and to work … the best we can (to find solutions).”

Multiple audience members speaking after Conover said they wanted to echo his concerns as their own.

Boyle County Jailer Barry Harmon, who did not speak at the previous public input meeting in Boyle County Monday, offered his take on some issues the jail faces as well.

The state of Kentucky doesn’t take the need for mental health care for people in the criminal justice system seriously enough, Harmon said, pointing to a 1,200-bed facility that had been a mental health hospital and is now used as a regular jail.

“The state did that and they washed their hands of it, and so we made the jails a dumpster for human life,” Harmon said, beating his hands on the table. “… Everybody has worth. I don’t care who they are or what they’ve done. We’ve had murderers, rapists. I’ve set and talked to a fellow that killed a 2-year-old boy. I’ve set and cried with him. He doesn’t remember it, but he pled guilty. He’s in prison. We’ve got to change. We’ve got to start here. Let’s set the example.”

Harmon also addressed some comments he made last week concerning a different matter — the hiring of an attorney by the Mercer County Fiscal Court to analyze whether Mercer is paying jail costs it’s not required to pay.

During a Boyle County Fiscal Court meeting, Magistrate Phil Sammons said that Mercer County officials “should be glad and keep their mouths shut” about how much it costs to run the jail, and indicated Harmon agreed with him. Asked about Sammons’ comments after the meeting, Harmon said Mercer County officials should “shut up” and be happy with the deal they have. He said “they have the best deal in the state” for a county that doesn’t have its own jail, and suggested it was inappropriate that Mercer County had hired an attorney to examine jail costs.

Tuesday night, Harmon gave an explanation of those comments.

“I said ‘shut up’ in the paper. The reason I said we need to shut up about what we was talking about — we need to focus on this because this is where change can and should come,” he said. “Not all at once, but we need to start the process.”

The Danville-Boyle County Planning and Zoning Commission began its meeting Wednesday with a Christian prayer, as it has for as... read more