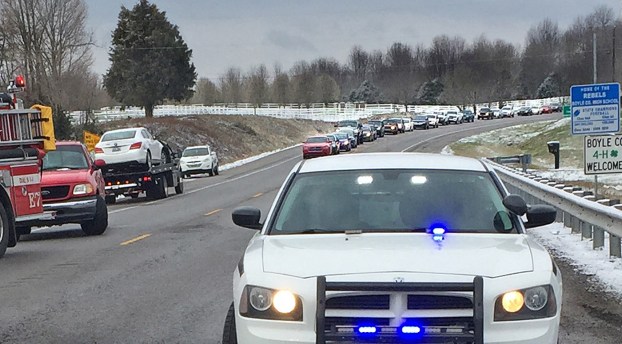 Photo submitted by Boyle County Emergency Management Director Mike Wilder Traffic was backed up on Ky. 34 Thursday morning in Boyle County when the bridge was closed due to ice. Two wrecks occurred on or near the bridge due to the slick roads.

Several wrecks reported in Danville, Boyle County due to ice on roadways

The bridge over Herrington Lake, along with a few others in Boyle County, were shut down for a while Thursday morning due to ice.

“It was absolutely terrible,” said Danville-Boyle County Emergency Management Director Mike Wilder. “No one realized it, I guess.”

The biggest concern was the bridge over Herrington Lake, he said, referring to the one on Ky. 34, just passed Old Bridge subdivision.

“That was a real issue. We had to shut it down totally,” Wilder said. There were two wrecks within 20 minutes of one another.

The Boyle County Sheriff’s Office reports the first happened at 7:22 a.m. when a vehicle, driven by Nastassia T. Gay, 37, of Lexington, slid on the bridge, spun off the road on the Boyle County end, striking the guardrail, crossed the center line and collided with the other guardrail.

At 7:39 a.m., a second car slid, flipping on the bridge within 100 feet of the other crash. The driver, Shelby McNees, 27, of Lancaster, had some minor injuries, but refused treatment.

There were no passengers in either vehicle.

“The woman was shaken up a bit,” Wilder said, referring to McNees. “You couldn’t walk across the bridge, it was so slick.”

There were about 10 wrecks throughout the county, he said. Wrecks were reported beginning at around 6:30 a.m. until 9 a.m.

Other bridges in the county, such as the viaduct on Perryville Road and the bridge on the U.S. 127 bypass, both state roads, were closed to traffic.

“They weren’t closed for very long,” Wilder said. He said they reopened “as quick as we could get salt out there.”

Wilder said the wind will blow underneath bridges, freezing those first. Tuesday morning, temperatures dropped to about 28 degrees.

“That was part of the problem,” Wilder said. He called the conditions “a perfect storm.”

Wilder said the snow is expected to fall periodically for the next few days.