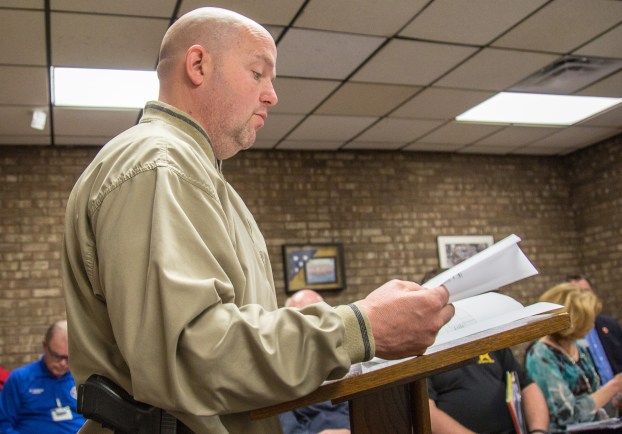 The Boyle County Sheriff’s Office has been authorized to purchase new “P25” radios at a cost of about $24,000, allowing deputies to continue monitoring emergency traffic on the Danville Police Department’s frequency.

Danville is upgrading to the “P25” system in part to lock down who can hear radio conversations on the police frequency. The city and county have gone back and forth in recent months over the upgrade plan, with Robbins and county officials warning a lack of communication between police and deputies could harm public safety and magistrates stating displeasure at what they saw as Danville forcing an expense on the county.

Robbins said Tuesday that he was comfortable with the county buying new radios for the sheriff’s office.

“It will allow us to monitor each other. For instance, I won’t talk on Danville’s frequency … but if something happened right out here in the parking lot and it was a life-threatening emergency and she dispatched it to Danville, but I just happened to be right here, I would hear that come across the radio and be able to maybe offer assistance before anybody else could get there.”

Members of the fiscal court questioned if new repeaters would still be needed to make the new radios work; Robbins said they would.

The cost of new repeaters has previously been estimated at about $40,000; Boyle County Treasurer Mary Conley and Robbins said repeaters are part of the 911 infrastructure and should be paid for with 911-earmarked funds now held by Danville.

“My opinion — I feel like the repeater system is part of the infrastructure,” Robbins said.

“And it always has been when Boyle County Fiscal Court handled those funds,” Conley said, referencing the fact that Boyle used to manage 911 revenues from cell-phone and landline fees but has now given that job over to Danville. “But I’m just the treasurer for Boyle County Fiscal Court — I can’t answer that question on the side of the City of Danville now that those funds have been deposited into their bank account.”

Robbins said he would bring up the repeater issue at the next meeting of the 911 advisory committee, which should occur in March, though a date has not been set.

Magistrates unanimously approved purchasing the radios. To offset the cost, they voted to delay a planned upgrade of playground equipment at the Boyle County Fairgrounds until next fiscal year.

Preschool, kindergarten and first grade students in the Danville Independent Schools will be housed at Jennie Rogers Elementary School for... read more