“This is one of the biggest accomplishments I’ve ever received,” said Cadet Maj. Ryan Hebert. The 16-year-old was just named 2017 Air Force Association Cadet of the Year Monday evening — an award that isn’t given every year. 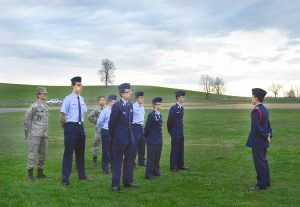 Before the ceremony, dark rain clouds blew in over Stuart Powell Airfield, as Hebert called eight cadets from Civil Air Patrol Squadron 122 to stand at attention and report in, while a local Air Force general and several other military officials stood by.

Following the opening ceremony, cadets, parents and representatives from the Air Force and local VFW filed into the CAP building, where Hebert was called forward and presented the award by Commander Ken Portwood of VFW Post 3634. He read just a few of Hebert’s achievements as Brig. Gen. Howard P. Hunt III (retired) and member of Post 3634, pinned on the medal. 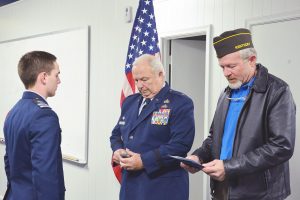 Portwood said Hebert shows a commitment to his squadron, helped other out-of-state cadets and volunteered with the Bluegrass Airport’s disaster simulation exercise. Hebert also is a staff member of the Hawk Mountain Search and Rescue School in Pennsylvania and attended the rescue and survival orientation course in New Mexico. 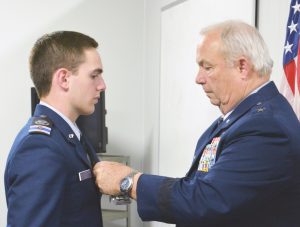 Following the ceremony, Hebert said he is hoping to attend the U.S. Air Force Academy in two years.

Next, Chief Master Sgt. Reed Campbell, 17, was called forward to hear Hunt read his acceptance letter into the U.S. Air Force Academy, where he is to report on June 28 as a member of the class of 2022. 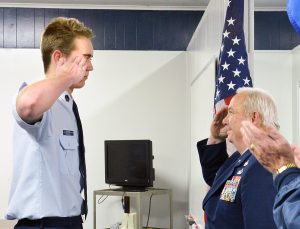 Hunt said this appointment is awarded to only about 1,200 of the 9,700 applicants and signifies Reed has the potential to meet the demands and challenges of the academy.

Campbell is a senior at Lincoln County High School and has been with the CAP for about a year and a half. He said the recommendation letter sent by his CAP squad commander, 1st Lt. Nick Birt, “Made my mom cry.” Campbell said he is very excited to become a part of the military family in the Air Force.

While speaking to the small crowd, Hunt said he has the greatest respect for the CAP, which is, “A great auxiliary to the Air Force … I am emboldened in seeing young men and women in uniforms. It encourages me greatly about the future we have in this country.”

Answering a question from a young cadet, Hunt said he advised them to, “Live your Air Force core values. That sounds simplistic, but it works there, and it works after you leave the service. Integrity first. Excellence in all you do. And service before self. It’s not just buzz words. The core values are what you are and what you bring to the table.”

Birt ended the ceremony by congratulating both Herbert and Campbell for their accomplishments so far. Talking to the two young men and the rest of the young cadets Birt said, “Aim high every time. These two did and look at them. Everyone one of you can do exactly the same thing.” 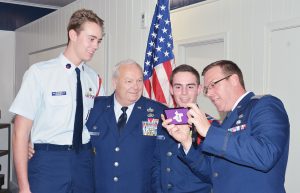 Mail Call!  Kiwanis Club of Danville is asking for the community’s support in helping make a difference in the lives... read more