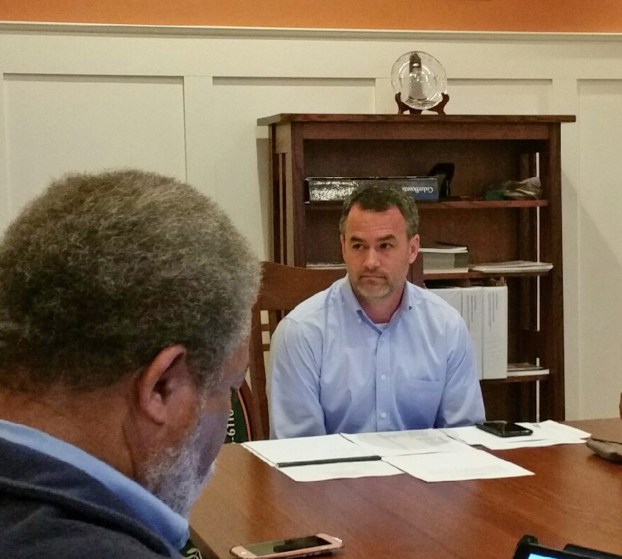 Kendra Peek/kendra.peek@amnews.com Tim Kitts, executive director with the Housing Authority of Danville, answers questions about the potential for an EnVision center in Boyle County during Tuesday's Housing Authority board meeting.

The Housing Authority of Danville is looking for prospective locations for a potential EnVision center, a site that would unite the services available to low-income Boyle County residents under one roof.

“The next step for us would be to look for a site. This could be an existing building, this could be a new location, but to look out in Boyle County to see, if HUD comes back and says, ‘Hey, we would love to see an EnVision center in Danville. Where would you have it?’ So we would kind of have that plan in place,” said Tim Kitts, executive director of the housing authority, as he explained the process to the board on Tuesday morning.

The EnVision centers are part of an initiative from the U.S. Department of Housing and Urban Development, he said, and the funding for the project would come from that agency.

According to HUD.gov, the centers are part of the idea that it will take “intentional and collective efforts across a diverse set of organizations” to help with long-lasting steps to solve poverty.

“This kind of falls in line with our vision as an agency, what we’re wanting to do for the community,” Kitts said.

“This went to HUD and just tells HUD, ‘Hey, the housing agency is working with the city and there’s a partnership there.’ That’s basically all that is,” Kitts said.

U.S. Department of Housing and Urban Development will begin looking at the potential locations, starting with 10 communities, according to information on the website. At this time, Kitts said, it is unknown which 10 communities will be selected.