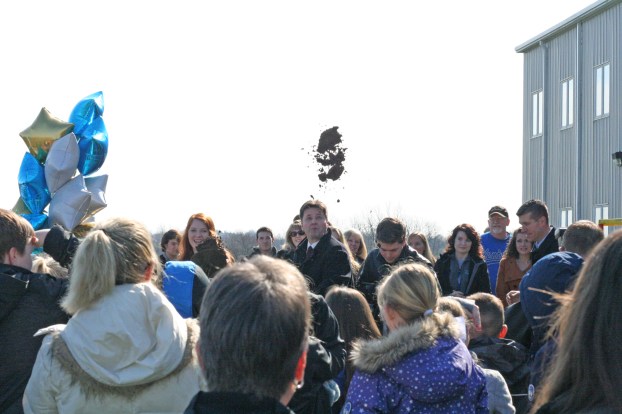 Kendra Peek/kendra.peek@amnews.com Danville Christian Academy Headmaster James Ward flips a clod of dirt in the air with his shovel during the groundbreaking of the new athletic complex. 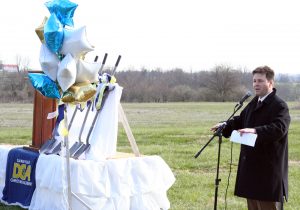 Kendra Peek/kendra.peek@amnews.com
Danville Christian Academy Headmaster James Ward speaks during the groundbreaking of the new sports complex at the school.

Students, parents and staff of Danville Christian Academy, along with former students and staff, celebrated the groundbreaking of the school’s new athletic complex on Friday morning.

“We are excited about this morning,” said Headmaster James Ward as he welcomed everyone to the groundbreaking. “This thing has been in the works for a long time.”

Ward recognized people who had been key to the process, such as Billy Inmon, the vice president of the board for the Danville Christian Academy. Inmon has been acting as a point person on the project in recent months. 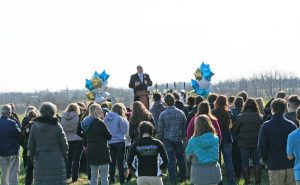 Kendra Peek/kendra.peek@amnews.com
Billy Inmon, vice chair of the board for the Danville Christian Academy and point person on the project, addresses the crowd during the groundbreaking of the school’s athletic complex on Friday.

Inmon thanked everyone for coming out.

“This day, to me, has been nothing short of a prayer that is finally, praise be to God, becoming a reality,” Inmon said. “I don’t think some of you kids realize just how blessed you are to be a Warrior right now, today. The future has never been brighter.”

Inmon told the students they were there because “we have the faith that God is going to show off with this new addition.”

He asked the students and families to be praying for the project.

Other speakers included the Rev. Ernest Martin, who helped found the school with his family. 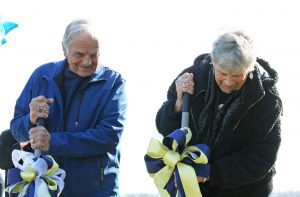 Kendra Peek/kendra.peek@amnews.com
The Rev. Ernest Martin and his wife Ferne, the founding family behind the Danville Christian Academy, take their turns at the shovels during the groundbreaking of the new athletic complex.

Martin said they opened the school in 1996, with a mixed-age class of 12 elementary students. It was housed in the basement of Calvary Baptist Church, according to news archives.

The school expanded to two churches, eventually moving to the current location. The land was donated in 2004, with the money for the building raised in time for a groundbreaking in 2008. It was completed in 2009.

The school’s first graduates were handed their diplomas in 2011.

After the groundbreaking, Inmon said, the facility, when complete, will be able to hold about 500 at a sporting event. The gymnasium will allow for two practices to run at the same time and for camps to be held at the school. 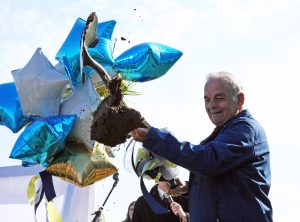 Kendra Peek/kendra.peek@amnews.com
The Rev. Ernest Martin, the man who helped start DCA, flips dirt off a shovel during the groundbreaking of the new athletic complex.

The school has recently joined the Kentucky High School Athletics Association on a probationary basis. They said this will allow them to host games at the facility.

There will be a mezzanine section for archery, to hold softball and baseball batting cages and an area for band.

The building will be located to the left of the current school building, opposite from the location of the school’s playground.

Currently, the school has no athletic facility and they are forced to rent spaces for students to practice, Inmon said.

“The main thing is, these kids, right now when it’s cold, they have no where to go. It’s going to be great for all the cold days, as far as recess, P.E., assemblies, plays. It’s going to be really great,” he said. “We’re very, very excited.” 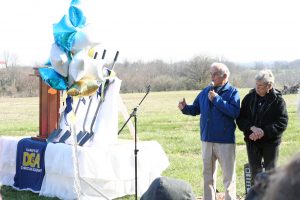 Kendra Peek/kendra.peek@amnews.com
The Rev. Ernest Martin and his wife Ferne, the founding family behind the Danville Christian Academy, share how the school came to be during the groundbreaking of the new athletic complex.

Inmon is a parent to three DCA children, besides being the vice chair of the board.

“I’ve been a part of the school for a long time. It’s a wonderful organization,” he said. “We’re really creating leaders here.”

Ward, who became headmaster in August, said he thinks it’s great to see it happening.

“It’s been a long time coming. Hopefully, this time next year, we will be celebrating time inside of that building,” he said.

The hope is to be in the building this fall, Ward said.

During the groundbreaking, Ward asked staff members, senior students and current and future board members to take their turn at shoveling the dirt.

Students also sang and prayed for the project.