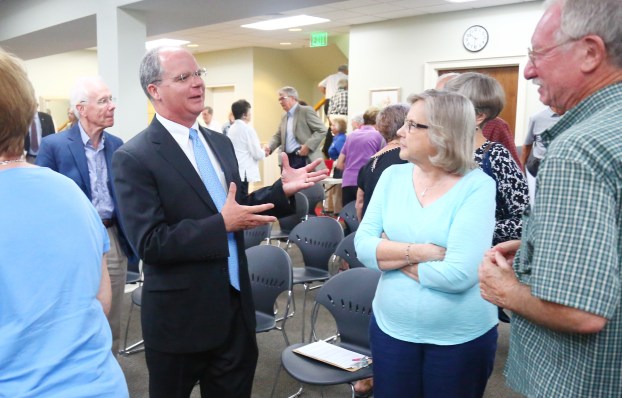 U.S. Rep. Brett Guthrie (R-Kentucky) will be visiting Boyle County on Tuesday, April 3, for a one hour meeting with members of the public.

Guthrie said Monday he’s calling the meeting “conversations with constituents” and plans on letting it be an open forum with anyone from the public who has questions or concerns. The event is planned for 3-4 p.m. at the Boyle County Public Library.

Guthrie is planning to hold meetings in every county in his district “in the coming weeks and months,” according to a release from Guthrie’s office. 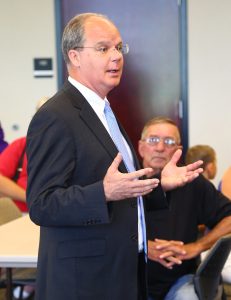 “We get a lot of questions from people in Boyle County,” Guthrie said. “… It was one of the early ones we wanted to do, quite frankly, reacting to constituent inquiry. Boyle has a lot of people active in what’s going on in D.C. so that’s why we wanted to make it one of the first stops.”

Guthrie said he will field questions about anything locals want to talk about — “probably whatever is in the news,” including the recent tax bill, the Mueller investigation, the just-passed omnibus spending bill and the opioid crisis, among other topics.

Guthrie said in Washington right now, he’s working on legislation to improve the federal government’s response to the opioid crisis, potentially by helping more people with rehabilitation options and reducing recidivism. This summer, he said he anticipates Congress will tackle “entitlement reform” in order to “deal with the budget deficit.”

Guthrie said he knows it’s impossible for everyone in the Second District to agree and many voters may see things differently than he sees them. But he wants to be able to explain his votes and decisions to all of his constituents.

“Votes are not currently expected in the U.S. House of Representatives on Tuesday, April 3. If the schedule changes and the House is voting that day, Rep. Guthrie will have to return to Washington, D.C., and the Conversations with Constituents event in Boyle County will be rescheduled,” according to the release from Guthrie’s office.

U.S. Rep. Brett Guthrie will hold “Conversations with Constituents” at the Boyle County Public Library, 307 W. Broadway St., Danville, from 3 to 4 p.m. on Tuesday, April 3. RSVPs are encouraged but not required. To RSVP, visit guthrie.house.gov or call (207) 842-9896.

Brett Guthrie represents Kentucky’s Second Congressional District, which stretches from Owensboro in the west to Lancaster in the east and includes Danville, Bardstown, Elizabethtown, Glasgow and Bowling Green in between. He has been in office since 2009.

AG: School board did not violate Open Meetings Act

The Danville Independent School board did not violate the Open Meetings Act during a Feb. 19 meeting, the Kentucky Attorney... read more