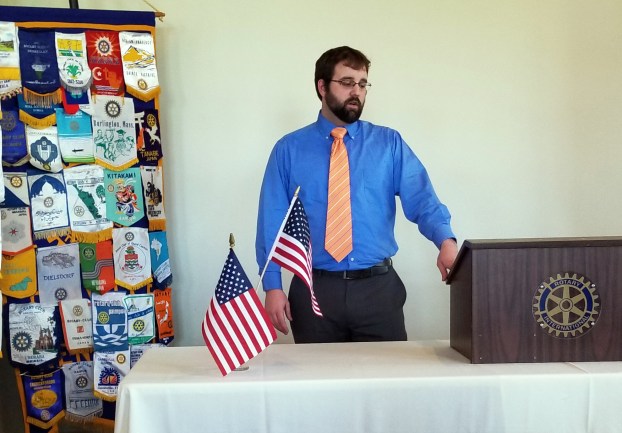 Kyle Hargrove, account executive for the Lexington Legends Minor League baseball team, the Class A affiliate of the Kansas City Royals, shared his thoughts about the planned highlights of the Legends’ 18th season.

The Kansas City Royals are in a rebuilding mode, after their best seasons in 2014 and 2015, so they will be recruiting the best available talent. That should mean the Legends will be getting some of premium talent for the next couple of years Hargrove began his presentation by mentioning that he has been the team’s representative to this area for the past five years, and knows several individuals in Rotary. His connections are with both Danville and Boyle County school systems, the little league that plays in Millennium Park and the Centre College team.

The Lexington Legends were named the 2017 Community Service Organization of the Year by the South Atlantic League. The award recognizes a club’s outstanding, on-going commitment to charitable service, philanthropy and leadership within their community. In the five seasons in which the award has been given, the Legends have won twice, previously winning the inaugural award in 2013.

With that introduction, Hargrove opened his dialog regarding the Legends’ upcoming season. He reminded everyone that the club is just two weeks from opening day. In just three days, they will learn who will be on their lineup of players. Opening day is April 5th, just two weeks from yesterday, he said.

“Opening day is really special for us. Rather you are a baseball fan, or not, you can understand the optimism we feel on opening day. We don’t have any losses; We might have a good road series; Maybe this year we will have a shot at the championship.

“I’m excited to tell you can expect to hear a new voice and witness history when watching Lexington Legends games during the upcoming season. Emma Tiedemann will become the new play-by- play broadcaster and media contact for the upcoming 2018 season. She is the first female play-by- play analyst in the South Atlantic League and the second in all of Minor League Baseball.”

Hargrove pointed out that the Kansas City Royals provide the players; the Legends are assigned players from the recruiting class, based on the anticipated needs of the Royals. They have no control over the assignments. The Legends provide the facilities and the fans. They are responsible for everything the players need to train and develop their talent.

“Speaking of developing talent, most of you probably remember right-handed pitcher Jacob Bodner, a Danville native and former Boyle County High School standout. Bodner finished his 2017 minor-league season with a 5-1 record for the Wilmington Blue Rocks, the High-A affiliate for Kansas City. He pitched in 29 games and rocked a 3.29 ERA over 54.2 innings pitched, striking out 70 batters to just 20 walks along the way.”

Bodner was selected by the Royals in the 27th round of the June 2015 draft. He pitched in college at Xavier. The Kansas City Royals chose Anderson Miller in the third round of the Major

League Baseball Draft in 2015 also. He played with Bodner while both were with the Legends. Miller came from Lexington’s Lafayette High School.

“It’s unusual to get players from our immediate region. Most of us players come from Texas, California, Florida, Montana, Alaska, over time we get players from every state in the Union. But we also get talent from the international game, Venezuela, Puerto Rico, and the Dominican Republic are the top three sources of our talent.

“Last year’s was a guy, Marten Gasparini, from Italy. Sometimes we get players from Korean, Mexico, even the Middle East. It’s a really interesting dynamic. All the players are our scorecard range from 18 to 22 years old. If someone reaches 24 years of age, his chances of a major league career are probably over.

“Last year we had a very unusual exception the average age of our league’s players. The guy’s name was Tim Tebow. Bet most of you remember him! Tebow was 29 years old at the time. So, naturally we had Tim Couch, the legendary UK football quarterback, come out for the first pitch. It was Memorial Day weekend, and we had around 8,000 in attendance (we average about 4,000). People came in from five or six different states, and from all over the state of Kentucky.”

Hargrove said the Legends draw is because they are a regional team. They draw from all over central and eastern Kentucky.

“Our slogan this year is ‘it’s family time.'”

The 70-game home schedule begins Thursday, April 5. They have planned a variety of promotions, theme nights and discounts throughout the season. Several special appearances and some theme nights are scheduled. Each Tuesday night will offer 25 cent hot dogs. Returning this year is Thirsty Thursdays presented by Kentucky Ale. This is a fan favorite and will continue to offer beer and Pepsi products for one dollar each through the seventh inning.