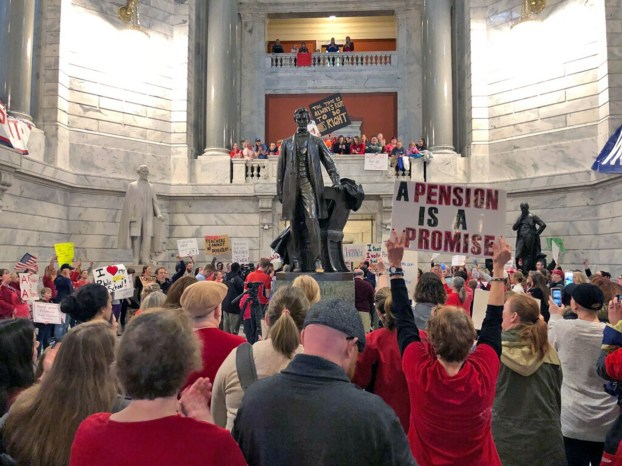 Photo submitted by Ryan New Teachers from across the state filled the Capitol building on Friday morning to protest the passage of Senate Bill 151 Thursday night.

School was closed in Boyle County on Friday, and in other districts around the state, as teachers responded to a late-night passage of Senate Bill 151, a bill about wastewater services that was unexpectedly turned into a bill about teacher pensions.

“Even though the legislature has already passed the bill, it’s important to send a message with our displeasure about how they went about passing this legislation,” said Boyle County High School teacher Ryan New.

The bill was initially introduced on Feb. 15, 2018, as “An act relating to the local provision of wastewater services,” but late Thursday night was amended to be “An act relating to retirement.” It was passed in both the House of Representatives and the Senate late Thursday night. As of Friday afternoon, Gov. Matt Bevin had not yet signed it into law. 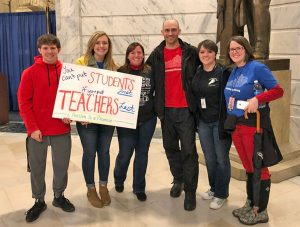 New said he and others were unhappy that there was no discussion about what was in the bill before it was passed and there’s still a lot of questions surrounding the contents.

“It’s largely the way they went about doing it that was a big disservice,” New said.

“The way that this was done is absolutely wrong on every level. If they can do this with public servants, they can and will do it with everything else,” she said.

That’s why it’s important for everyone to pay attention, she said.

New guessed there to be up to 300 in a crowd of teachers in Frankfort Friday. He and Spurlock were there with fellow high school teachers Andrea New (New’s wife) and Beth Prather, as well as students Delaney Simpson and Tyler Smith.

New said the atmosphere in Frankfort was “very electric” Friday, despite the lack of legislators. “Everyone is just angry,” he said, calling the group “energized.” Being there, he said, was a “move of solidarity.”

“It’s absolutely important to get out there today to stand up for teachers coming in,” she said.

According to a statement from the Boyle County School District, about one-fourth of the district’s teachers called in sick on Friday, forcing the closure because of a lack of available substitutes. There are 237 certified staff members in the district.

In the statement, Superintendent Mike LaFavers apologized for any inconvenience caused to families.

“This is a trying time for all Kentucky educators. The Boyle County Schools staff is deeply committed to our students and to the future of education in Kentucky. As a result of this commitment, our staff decided to stand in solidarity with educators across the state today,” he said.

According to the statement, requests for the day off from teachers began rolling in just after the passage of the bill.

The Danville Independent School District remained in session on Friday. Superintendent Keith Look sent a letter to staff crediting them for putting students first, but took legislators to task for the actions.

“The actions of our Kentucky General Assembly yesterday puts on display for all why many are disillusioned with politics. A legal maneuver allowed a sewage bill to be converted into pension reform,” he said in the letter.

Look said in the letter he hoped Sen. Rick Girdler and Rep. Daniel Elliott would return to the district to explain why they voted for the bill, but admitted he was doubtful that would happen.

Burgin Independent Schools were in the first week of their two-week spring break and Mercer County Schools started their spring break on Friday. Garrard County, Lincoln County and Casey County were all in session on Friday.

Concerned about the future

Spurlock said her biggest concern about the bill is the impact on new teachers, who will be most affected by the changes in retirement plans.

“We can’t expect someone to come in who doesn’t pay into Social Security and not be promised retirement,” she said — that would severely limit the pool of candidates.

“I’m very glad our school let out and I was able to come up here,” she said, explaining she wasn’t able to request the day off.

“It was amazing to see so many reachers standing together to let our voices be heard,” she said. “They were absolutely ignored last night when this was passed. We have to let them know they cannot ignore us.”

Delaney Simpson, a senior with aspirations to become a teacher, said she felt it was important to go to Frankfort to show support for the teachers who have taught her.

“It was really inspiring,” she said. “There was one moment where they started chanting, ‘This is what democracy looks like.’ That means a lot to me. It was really perfect to see that teachers, even when they’re not teaching, they’re still being inspiring.”

Simpson said she completely understood the closure on Friday.

“It’s important for teachers to come together and unite, especially in this way. It really makes a statement,” she said. “… We’re not mad at them, by any means. We think it’s the right thing to do in this situation.”

Her classmate, Tyler Smith, said he also wanted to show his support. Smith is the son of a former teacher and said he has several family members in education.

“I’ve seen how undervalued they are. They’re being represented in an unfair way,” he said. “Teachers are not fairly represented with the amount of effort they put in with what they do.”

While their counterparts headed to Frankfort on Friday to protest the late-night passage of Senate Bill 151, a few Boyle County educators stepped up to help the district’s Family Resource and Youth Services Centers as they handed out food to kids. 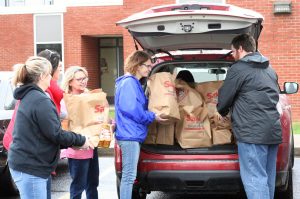 Each week, the Family Resource and Youth Services Center coordinators visit the homes of families in the district to deliver food. On Friday, the visit was doubled up, to cover the weekend and the following weekend, said Boyle County Middle School Coordinator Kathleen Sinkhorn. There are about 100 kids who receive the meals each week, many within the same households.

They may not have traveled to Frankfort, but the teachers who stayed to help deliver food said they were equally as upset with the bill.

“I heard the bill was originally about sewage. I think it still is,” said Katie Tiller, a Boyle County High School teacher.

Tiller said the fact that the whole thing was done in such a secretive way is frustrating.

“I don’t know anyone opposed to pension reform. We all know it needs to happen,” she said — but there were other ways that should have been considered.

Tiller questioned the legislators ability to read the bill, given to them minutes before the vote.

“Someone who’s trying to act responsibly would want to read it … In what scenario in your adult life would you attach your name to something without reading it?” Tiller asked. “If I knew they had read it … I could at least respect that.” 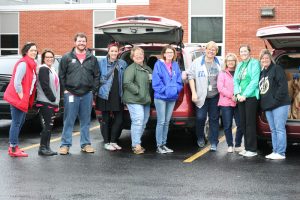 Tiller, an English teacher, and Boyle County High School teacher Eli Edwards were two of the district’s teachers to request off for Friday, although both said if the district hadn’t called school off they would have likely gone into work so that it wouldn’t have placed a hardship on their coworkers trying to make up the difference.

Edwards said teachers did not make the decision about taking the day off lightly, but they felt they had to act.

“After the vote was passed last night, we know  teachers who were so worried about it, they got physically ill,” he said.

Edwards and Tiller said they hoped students realized that the teachers are practicing what they teach.

“We just finished reading ‘A Raisin in the Sun,’” Edwards said. “In that, Walter has to decide between doing what’s easiest and what’s right.”

Now, he said, teachers have to make that choice themselves, a choice that highlights just exactly what this bill could mean for public education. This bill, Edwards said, could lead to a shortage of teachers.

Teacher Kate Fryar agreed, and said she was glad teachers were making themselves heard. She, too, stuck around town to help deliver food.

“We have to stand up for ourselves and future teachers,” she said. But even as they supported the cause, “We wanted to still get (the kids) what they needed … We wanted to make sure kids had food.”