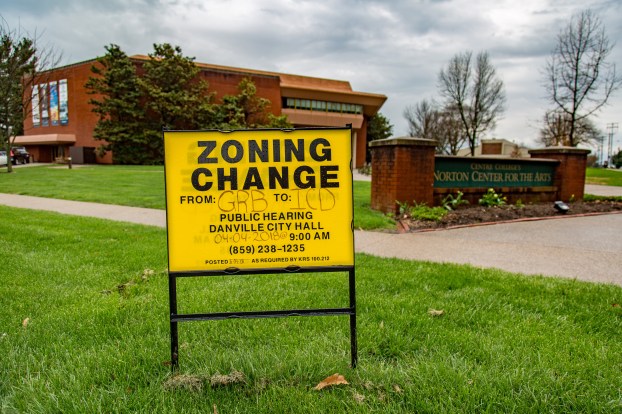 A zoning change sign outside the Norton Center for the Arts informs passers-by of a 9 a.m. April 4 hearing. (Photo by Ben Kleppinger)

Yellow rezoning signs have been up all over Centre College’s campus, prompting many to call Danville-Boyle County Planning and Zoning about what’s going on.

P&Z Director Steve Hunter said he’s been fielding a large number of calls about the rezoning, which the P&Z Commission will consider this coming Wednesday. But it’s not as big a deal as it might appear.

Centre College and the P&Z Commission are jointly applying to rezone the entirety of Centre’s campus as “institutional campus development” (ICD).

Hunter said that’s because currently, Centre’s campus is zoned in a variety of different categories that aren’t appropriate for the real use as a college campus.

According to a staff report on the rezoning proposal, Centre Campus currently exists in seven different zones that are not ICD.

“This zoning conversion project has been requested to properly classify all (existing) campus property to the most appropriate zoning district,” the staff report reads.

Hunter said the conversion was prompted by another project Centre will be bringing before the P&Z Commission Wednesday — the addition of a new dormitory on campus.

According to a drawing included in the monthly P&Z packet, Centre is planning a “proposed dorm” that would have 64,675 square feet and be located north of Main Street, with access to a parking lot from Rowe Street. The drawing also includes the potential location of a second, “future dorm” that would have the same square-footage.

In addition to the Centre College items, the P&Z Commission will also consider approving an amendment to the Danville-Boyle County Comprehensive Plan that would update Perryville’s future land use map and put in place a process for amending future land use maps.

School was closed in Boyle County on Friday, and in other districts around the state, as teachers responded to a... read more