Question: Jerry, can you help me with this? I’ve got several of these Buster Brown comic pages. They are all dated from 1905 to 1906. They’re in good condition but show some wear. They measure about 9 inches by 12 inches.

Are these original works that they would then copy and make the comic strip off of? What they be worth? Thanks for your time. 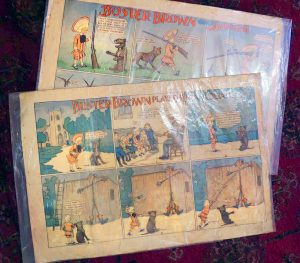 Answer: OK, what you have are loose Buster Brown pages. Buster Brown was once a well known, in fact, a huge icon, of American advertising.

Buster Brown was created in 1902 by Richard F. Outcault and was adopted as the mascot for the Buster Brown Shoe Company in 1904. Buster Brown and his little girlfriend Mary Jane and his dog Tige were in the public eye for generations. Buster Brown’s character and appearance, including his page boy hair cut, was loosely based upon the real life little boy, Granville H. Fisher, son of Charles and Anna Fisher of Flushing, New York.

The name Buster came from the also legendary comic, Buster Keaton. The comic character, Buster Brown was the son of wealthy parents and with his golden hair, well-made suit and wide eyes, he was deemed almost too pretty for comics. But this pretty, little, rich boy carried on many adventures with a wide host of characters and situations, inspiring other youths to seek out adventures and thrills — naturally, while wearing Buster Brown shoes.

Buster’s appearance over decades made its way into not only comics but radio, film, theater, television and even playground games.

Buster is part of what’s called the Platinum Age of Comics, that means they are comics from1897 — 1937. He is still the mascot for the Buster Brown Shoe Company, although, his fame, now has nearly faded from memory.

Back to your pages. You have pages that were once mounted in book form. These were big books sold in serial form. I assume that the comics came first and each year a “coffee table” book was put together. Imagine the Calvin & Hobbes books but from a century ago.

See the holes on the left margins? That’s how it was sewn together. So, I guess the book was in poor condition, as is often the case, and it’s over 100 years old and they weren’t made to last forever. But some child or adult wanted to keep them.

The actual books, in good condition, can sell from as low as $75 to high as $500. Remember that is depending on the title, edition and, of course, the condition.

You have just pages and I’m afraid that makes it have just a decorative value. But I’d say to a collector they might, in a retail store, be priced for about $20 each. Framing will also increase the value. However framing cost money. They are great reminders to a once iconic comic character. Thanks for sharing them.

BY JERRY SAMPSON Question: Jerry, well, I was shocked last weekend. A few friends and I went to the BGT... read more