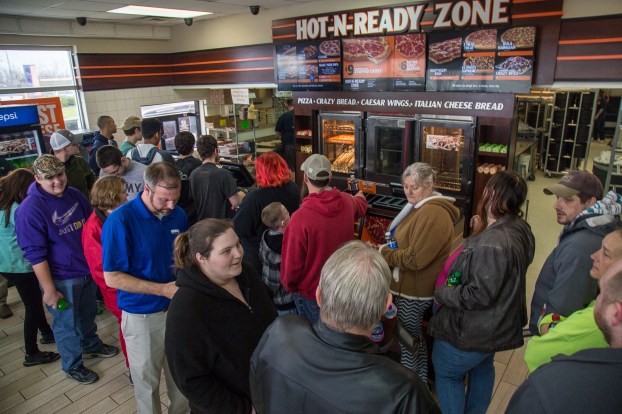 A line of customers doubles back inside Little Caesars lobby.

March Madness made things a little crazy at Little Caesars on Monday, as the national pizza chain delivered on a promise to give away lunch combos if a 16-seed beat a 1-seed in the NCAA men’s basketball Division I tournament.

The UMBC Retrievers made history in mid-March by beating the overall No. 1 seed Virginia 74-54, becoming the first 16 seed to ever accomplish the feat. No. 1 seeds have beaten 16 seeds in all of the other 135 match-ups over the tournament’s 34-year history. 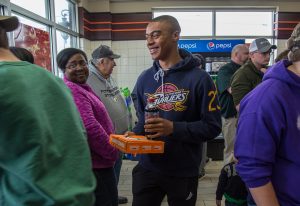 Landen Bartleson weaves his way back out through the crowd after getting his free lunch combo.

Little Caesars gave away lunch combos from 11:30 a.m. to 1 p.m. Monday to celebrate the historic victory. At the Little Caesars on Hustonville Road in Danville, approximately 500 people managed to get a free lunch during the two-and-a-half-hour window, said Greg Hollon, owner of the restaurant.

Cars backed up all the way around the building and out into the right lane of northbound traffic on Hustonville Road, slowing traffic and occasionally generating honks from drivers unaware of what was going on. A crowd filled the restaurant’s lobby and the line of people backed out into the parking lot.

Hollon said he’s seen larger numbers over time from longer-running specials, especially around Halloween, but as far as the largest single group of people all trying to get pizza from the business at the same time, this was probably the biggest. 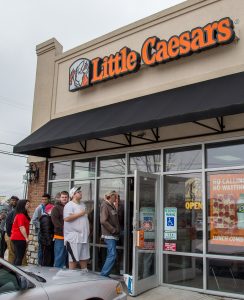 The tail end of the line juts out the front of the restaurant as 1 p.m. and the end of the deal approaches.

EDP board examines efficiency, plans for future during day-long retreat

Forming and storming  Fourteen members of the recently reorganized Economic Development Partnership board of directors held an all-day retreat in... read more