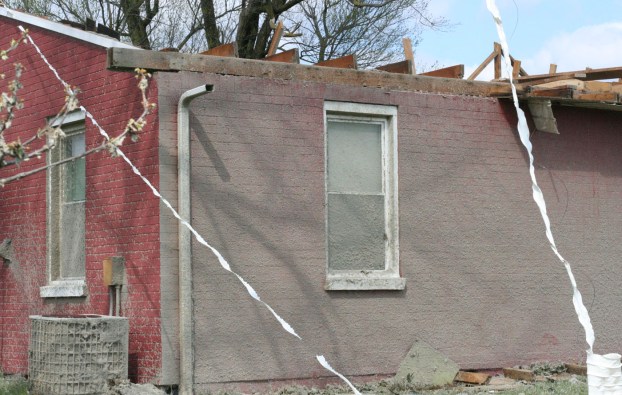 Kendra Peek/kendra.peek@amnews.com The roof blew off a house on Webster Road, spreading insulation on the back, during Tuesday's storm. A hose from a dryer hangs in the a tree.

Still unknown if tornado touched down

Storms blew through Boyle County Tuesday night bringing threats of tornadoes, but it remains unclear if one touched down or not.

Boyle County Emergency Management Director Mike Wilder said that from about 9:15 p.m. until about 10:30 p.m., the county was under a tornado warning. As of Wednesday afternoon, it was unclear if any tornadoes had actually developed in the county, Wilder said, although some did appear in neighboring counties.

He said the National Weather Service out of Louisville would be visiting the county to make a determination.

The bulk of the damage in the county seemed to hit in the southwestern part, where shingles and roofs were damaged. At least one barn was reported destroyed on Parksville Crosspike and the roof was torn off a nearby house on Webster Road. 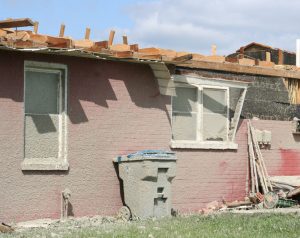 Kendra Peek/kendra.peek@amnews.com
The roof blew off a house on Webster Road, spreading insulation on the back, during Tuesday’s storm.

Wilder said no one was injured. Residents at the home on Webster had gone to the basement before the house’s roof was ripped off. He said they got out safely, and had time to remove some personal items, but eventually the ceiling began to cave in. They are staying with family members and the Red Cross was called. 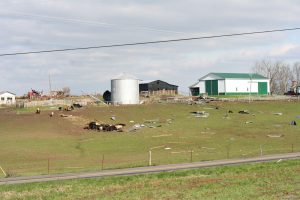 Kendra Peek/kendra.peek@amnews.com
A barn on the Parksville Crosspike blew down during Tuesday night’s storms.

The area on Parksville Crosspike where the barn was destroyed is also where several utility poles are located, Wilder said. Due to the wet ground, trucks had to be pushed along by a bulldozer, he said, because the trucks couldn’t maneuver the wet farmland. 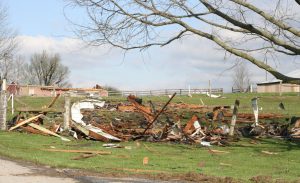 Kendra Peek/kendra.peek@amnews.com
The roof blew off a house on Webster Road Tuesday night when a storm blew through Boyle County.

“They’re going to have a hard time cleaning up some of (the damage) because the ground is so wet,” Wilder said. “They can’t take a tractor and wagon through those fields.”

This weekend’s anticipated snow will likely make clean up harder, he said.

A portion of Webster Road was also closed for a while Tuesday night when a large tree fell, blocking it. Several trees fell during the storm, Wilder said, and power outages were also reported in the western end of the county.

According to Inter-County Energy representative Dan Hitchcock, the energy company had 700 customers without power Tuesday night, but were all restored later that evening.

Liz Pratt, a spokesperson with Kentucky Utilities, said there were scattered outages impacting about 360 customers between 10 p.m. and midnight Tuesday. Most were restored Tuesday night, with a few customers still without power yesterday afternoon, but Pratt said all were expected to be back on by end of day Wednesday.

Wilder said the storms highlighted another issue: Despite the signals being sent, not all of the county’s 16 weather sirens went off. Some worked and some didn’t, he said, and he knows the strong winds did interrupt the signal from the 911 center.

“We’re in a constant battle with our sirens,” he said, but one is scheduled to be replaced this year, and he has applied for a grant to replace two more next fiscal year.

“We have two in Perryville. The one by city hall went off, the one by the (Boyle) County Fire Department didn’t,” he said. They will be tested per usual tomorrow, the first Friday of the month.

There’s a bigger issue, Wilder said, in that people need to be less reliant on the sirens, which are only supposed to warn those who are outside.

“We’ve got to get out of the mindset of being dependent on those sirens,” he said.

That’s why it’s important for every house to take advantage of the county’s free Code Red alert system, Wilder said.

He said it’s also important for everyone to have a plan in place, so when a watch is enacted, everyone can get to safety.

“We’ve become very sophisticated in our early warning. We have a lot more time than we used to prepare for our severe weather,” Wilder said. “Every resident needs a plan of some descriptions of what to do in the event of severe weather … It may not come, but you’ve taken the steps.”

Superintendent says calculation is flawed, includes more than $2M in other expenses Boyle County has one of the highest rates... read more