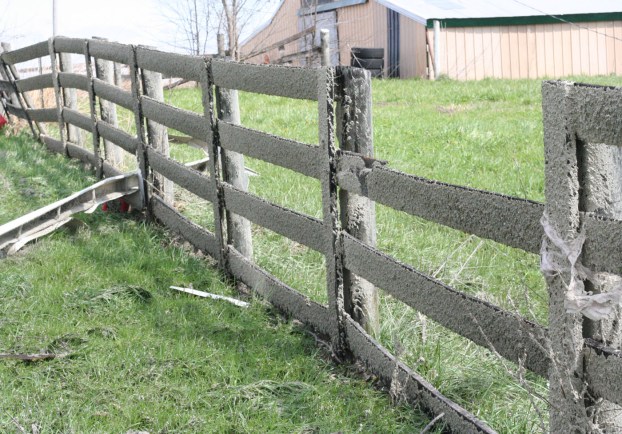 Kendra Peek/kendra.peek@amnews.com A fence behind a home on Webster Road is covered in insulation after the roof blew off the home, spreading debris in a neighboring field. A gutter lays in the fence, too, all after a storm swept Boyle County Tuesday night.

The National Weather Service has confirmed an EF-1 tornado set down in southwestern Boyle County on Tuesday night, when storms swept the region.

“It was on the ground for about half a mile,” said John Gordon, a meteorologist with the National Weather Service in Louisville on Thursday.

Gordon said the tornado was located about three to five miles southwest of Danville, carrying winds of 90-95 miles an hour and was “very narrow,” at only about 120-125 yards wide.

Gordon confirmed the tornado hit a farm along Parksville Crosspike and a house on Webster Road. The roof was torn off the house. 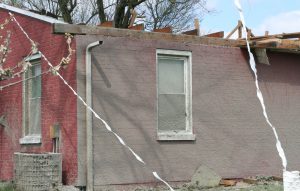 Kendra Peek/kendra.peek@amnews.com
The roof blew off a house on Webster Road, spreading insulation on the back, during Tuesday’s storm. A hose from a dryer hangs in the a tree.

Gordon said the house was one aspect that helped confirm it; the glass doors and the insulation were blown back to the house. Straight-line winds would not have done that, he said.

There were several other reasons Gordon said they believe it was a tornado: The vegetation and the grasses in the area show the right signs; and an antique sled on a farm, which Gordon said was probably 50 years old and very heavy, was picked up and moved about 10 feet.

“It was not slid, it was moved,” Gordon said.

Gordon explained that an EF-1 tornado falls between 86 and 110 miles an hour. Meteorologists ask a series of questions, he said, to determine if a tornado was present. For farms, for example, they look at the buildings that sustained damage, asking if the metal or wood was torn, if the doors were torn off, or if there was a collapse of the building, among other things.

Perryville now officially has a new future land use map, and the Danville-Boyle Planning and Zoning Commission has an updated... read more