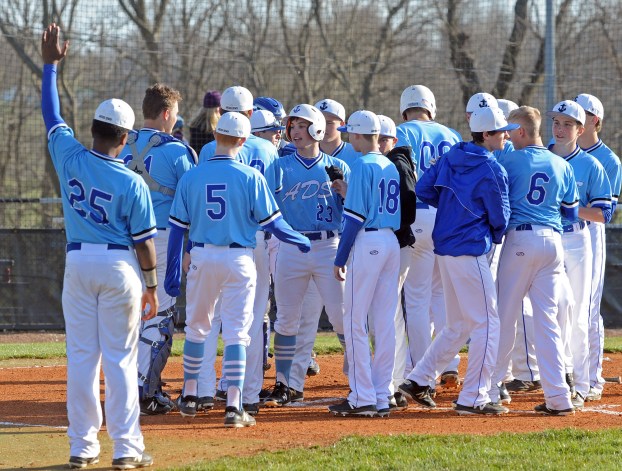 Danville’s eighth win in a row was as decisive as the first.

The longest winning streak in the region continued Monday as the Admirals dismantled Model 13-3 in five innings. Danville sent three pitchers to the mound, each giving up just one run, and the bats stayed hot with a 15-hit performance.

Hunter Baxter earned the start for Danville, his first activity on the mound of the season. He walked the first batter he faced but settled down after allowing one run (unearned) in the first, giving up just one baserunner in the next two innings.

“Hunter Baxter did excellent,” Danville head coach Paul Morse said. “He got hurt in the first game of the year and just played a couple innings, he had a little hairline fracture in his wrist and strained some ligaments. We’re hopefully counting on him to be able to pitch some for us. He’s just getting cleared to do that and he went three innings and his second and third innings were better than the first. He did a good job.”

Barnes would lead off the third inning with a solo home run, the first of eight runs in the third to put Danville ahead 10-1.

“He played really well,” Morse said of Barnes. “Brennan Washington is our normal leadoff guy and he got hurt in batting practice. Preston stepped right into that spot and played well at short and swung the bat well too. He got us going. He had a great day and he’s been having a great season, playing a bit of everywhere.”

Washington was hit with a ball during batting practice before the game. He went to the ER to get three stitches in his lip but returned in the middle of the second inning.

“He’s been hit like nine times already,” Morse said. “He’s definitely working on our bruiser award, for sure. He’s a tough kid, he plays hard. I was glad to see him come back. It says something about the kid when they have to go to the hospital to get stitched up and he still wants to come back and play.”

The third inning was kind to almost every Danville batter: Jacob Crank singled, Ethan Wood walked and Shaver was there again to drive in two runs. Shaver finished the day 3-for-4 at the dish with five RBIs. Christian Howe would bring in Shaver’s courtesy runner, Sam Gibson. Howe was brought in by a double from Brady Morse. Crank singled to score Bryson Young and Brady Morse, and Washington would steal home to end the Ads’ scoring for the inning.

After Baxter at the mound, Austin Mott entered the game: He pitched one inning, giving up one run (unearned) while walking two and striking out one.

Noah Goodman finished the game on the mound for Danville, giving up two hits and one earned run.

“Austin and Noah, they have great stuff,” coach Morse said. “With them it’s all about throwing strikes. Sometimes they want to nitpick a little bit, get their pitch counts up. That’s what we’re working on with them, coming in and challenging some guys, throwing strikes. I thought they did fairly well in doing that today, we’ve just got to keep doing that.”

Danville will face Lincoln County Tuesday and Wednesday in a home-and-home 45th District series. Tuesday’s game will be played in Stanford.

Danville girls’ tennis coach Ryan Adams said his current team is the “most talented” he’s ever coached. The Admirals are... read more