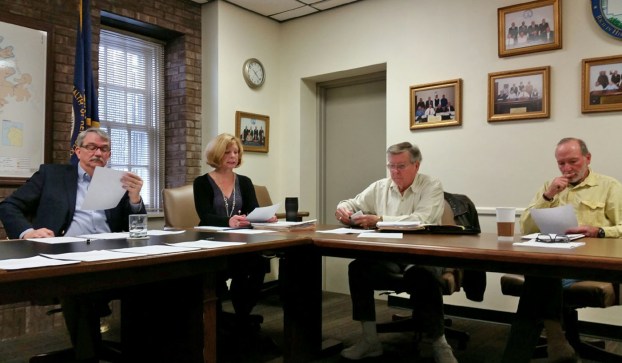 Kendra Peek/kendra.peek@amnews.com Mary Conley, county treasurer and member of the ad hoc committee, reads a proposed purchase guidelines document for the committee, while Boyle County Judge-executive Harold McKinney, left, Magistrate Jack Hendricks, center right, and City Commissioner Rick Serres follow along. It was accepted and dictates how the committee is to operate regarding purchases; for example, the city or the county must take on the projects, not the Parks and Rec department.

The Danville-Boyle County Parks and Rec Ad Hoc Committee meeting got off on a rocky start Monday morning when the first thing on the agenda — the minutes of the Feb. 12 meeting — were called into question.

He brought a memorandum with seven items that he felt needed to be changed in the minutes, all pertaining to work done on the security cameras at Millennium Park, and asked that the packet he brought be added to the minutes.

Scott went through the different points, explaining how he believed the minutes were not correct.

Specifically, he said, the minutes state that the city stopped work on the security cameras before they were completed: Scott said Danville never stopped the work; City Commissioner Rick Serres did in his capacity as owner of Bluegrass I.T.

Scott said the city would not pay for the project because the city’s procurement policy wasn’t followed.

After hearing Scott’s points, Boyle County Judge-Executive Harold McKinney asked for the opinions of others on the committee.

“The minutes are the official way that we speak — this group and any group so constituted, speaks. If we vote on the minutes, we are saying these minutes are correct,” McKinney said. He said attaching the memorandum made it part of the record as well.

He asked if everyone understood.

Boyle Magistrate and ad hoc member Jack Hendricks said, “I understand it, but I don’t think the interpretation is exactly correct.”

He pointed to the October minutes, which Hendricks said dispels one of Scott’s points in the memorandum.

“One of the statements made in the interpretation is that there wasn’t anything discussed about it in October. I thought we discussed it quite extensively,” Hendricks said.

He said the minutes did not say anything about Scott or Mayor Mike Perros making comments expressing their disagreement with the discussion.

Scott said he remembered having objected during that meeting and that he felt Serres questioned the process; Boyle County Treasurer Mary Conley said if there had been objection, it would have been noted. Conley is responsible for taking meeting notes and drafting the minutes of each meeting.

Hendricks said Serres’ questions were in the minutes, but not Scott’s objections.

He also said he felt the camera upgrades were a continuing project, which was explained in the October meeting.

“It was explained how they went about that — Director (John) Drake said the vendor did the original work. That’s been my contention, since 2014 — the vendor has been doing this work. That’s why I felt very strongly that it was a continuation of work,” Hendricks said. “It don’t state this, but in my opinion, doing this, if we have to go to Lexington or Louisville to bring people in to redo this whole thing, it’s going to cost taxpayers a large amount of money and I just think it’s not appropriate. I still feel very strongly about it that we did everything right.”

Hendricks said he also felt it should have been brought before the city commission by this time, because he felt “the elected officials ought to have something to say about it.”

“If you’re the sole person making this decision and don’t include the elected officials, I think we’ve got a serious problem,” he said.

Scott said, “You might recall, in that January meeting, I mentioned to the mayor that he was free to make a recommendation to the commission that this still be paid … He declined to do so, citing the ethics ordinance and a potential problem in doing that.”

The city’s ethics ordinance is found in Article Nine of the city’s Code of Ordinances, found online at bit.ly/2qqNaPB.

On Tuesday, Scott said he felt the other members of the committee misunderstood that ethical issues needed to be considered in this situation.

According to the ethics ordinance, “No officer or employee of the city or any city agency shall directly or through others undertake, execute, hold or enjoy, in whole or in part, any contract made, entered into, awarded or granted by the city or a city agency.”

There are certain instances where that is permitted, Scott said. If an elected official held the contract prior to running for office, they can keep the contract, until time for renewal. For renewal of a contract or the beginning of any other contract, the work must be bid out. The person with the conflict must disclose their conflict and must leave the room during the vote.

Scott said he believes the ethics ordinance does not keep Bluegrass I.T. from working on the cameras at all, but rather that the projects must be bid out and only if the company is the best price for the work could it receive the contract.

“It would be possible to hire (Bluegrass I.T.) at that point, if the proper steps were followed,” Scott said. “It’s not an absolute prohibition against a city official having work with a city.”

On Monday, Conley said the project was the first listed on a schedule of projects circulated before the 2017-18 fiscal year.

“I think we very clearly — if we read the documentation that was presented to us — understood that there was going to be a project done to that magnitude,” she said.

Conley said she also circulated the quote from Bluegrass I.T. in August and she felt they had done their “due diligence” to make sure everyone was aware of the projects.

Bringing the meeting back around, McKinney pushed for the vote.

The cameras, which are the crux of the conversation, have been installed; Serres estimated the project is 95 percent completed — there are just a few minor adjustments remaining on camera angles and things of that nature left to complete.

Danville has not paid any money for the project. Instead, Boyle County paid for its half and Danville-Boyle County Parks and Recreation paid for the remaining half that Danville had been expected to pay. A check was given from Bluegrass I.T. back to Parks & Rec for the amount it paid, but Director John Drake said the agency has not cashed it and does not intend to cash it.

Conley said she decided to create purchasing guidelines for the ad hoc committee. She presented those to the committee on Monday, including procurement policies for each entity.

The guidelines remove the Parks & Recreation agency from heading up any projects being handled directly by the ad hoc committee, which is a joint creation of Danville and the Boyle County Fiscal Court, designed to oversee additional capital projects at Millennium Park above and beyond the Parks & Rec budget. Under the guidelines, either Boyle County or Danville will be responsible for purchasing and construction.

The guidelines require all vendor information to be considered by both entities, in order to ensure there are no conflicts of interest. The guidelines also do away with the current policy that requires Parks & Rec to pay bills and be reimbursed by Danville.

Conley said she wanted to draft it so they would have “something in writing” in an effort to reduce any confusion moving forward.

The guidelines were approved by the committee.

“I think these are very good. I’m very comfortable with them,” said McKinney. “I would like to circulate them with our fiscal court and make them aware of what we’re doing.”

Hendricks agreed and said he felt everything needed to be taken to a vote, to clear up any doubts about how people vote.

The committee also reviewed a list of potential capital projects at Millennium Park for the coming fiscal year. Committee members estimated they would have about $100,000 for the projects — $50,000 from both Danville and Boyle County. But the final numbers would depend on the budgets for the city and county, neither of which has been approved at this time.

Scott told the committee they would also need to discuss sharing the cost of water going to Millennium Park and the Bunny Davis Center, since both facilities are shared by the city and county. Currently, he said, the city is spending somewhere in the neighborhood of $50,000 a year to get water to the two.

He plans to bring more concrete figures to the next meeting.

Infrastructure, health scores worse than in 2015, but participation and engagement go up Danville residents rate their streets, sidewalks and... read more