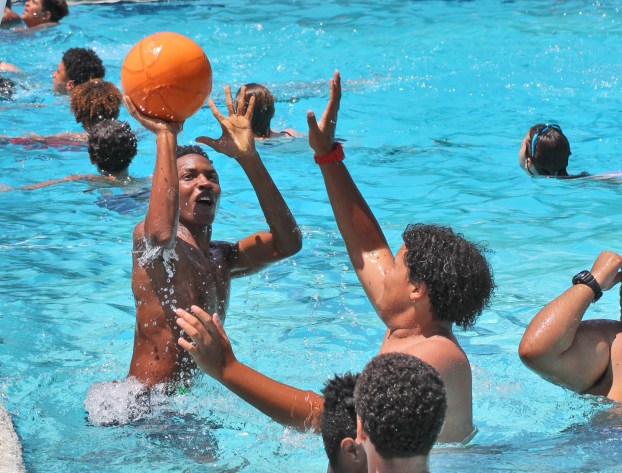 (File photo) People play in the Bunny Davis pool in 2016. Officials have said for years that the aging pool has a very limited lifespan remaining. According to a recent survey of Danville residents, building a new aquatic facility is the public’s highest parks and recreation priority.

More than half of Danville’s residents may think construction of a new public aquatic recreation center should be a high priority, according to the results of the recently completed National Citizen Survey.

Besides the standardized questions that are asked of residents in all of the hundreds of cities that use the National Citizen Survey (NCS), Danville also asked its local respondents to answer questions on two local topics: the need for sidewalks connecting neighborhoods to downtown and priorities for parks and recreation.

Respondents were asked to rate eight parks and recreation categories as “high priority,” “medium priority” or “not a priority.

Parks and Recreation Director John Drake said the fact that the survey asked about an outdoor instead of indoor aquatic facility is “key.” That’s because from an expense perspective, an outdoor facility is much more achievable.

Drake said the Bunny Davis center “was just supposed to be a Band-Aid.”

“When the city bought this, they already had pressure to build just what you’re talking about here,” he said.

Drake said building a new facility will be no small undertaking. “First of all, we need the right location.”

Drake said he thinks any aquatic facility should be kept out of Millennium Park. The addition of such a large facility and generator of traffic would “devastate” the character of Boyle County’s centerpiece park, he said.

The Boyle County fairgrounds, which sits adjacent to Millennium Park, is one location that would work, he said.

Other parks and recreation categories that received strong support in the survey include:

“Offering new recreation programs” and “Building new walking and biking trails” tied for the most “high priority” responses after the aquatic center, with 31 percent choosing them as top priorities. 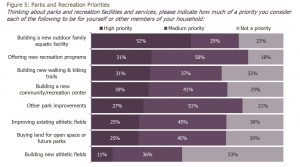 (Graphic from City of Danville) According to survey results released by Danville, more than half of respondents say “building a new outdoor family aquatic facility” should be a “high priority.” New recreation programs, building new trails and building a new recreation center also had strong support.

Jennifer Kirchner with the Danville-Boyle County Trails Alliance said the survey results show efforts to expand and improve walkability and the local network of trails are on-target with what the public wants.

“I’m not surprised at all by the results — quite frankly, I agree,” Kirchner said. “I think that trails and recreation in general — parks, green space — has always been a priority for people in our community. And I really understand why the marks are lower, because quite frankly, I think we need to be doing more.

“That being said, I also think part of the lower scores is … people are disenchanted with government in general.”

Kirchner said when it comes to the addition of new trails, the process can often feel like it takes a much longer time than it should. That’s because there are many hoops to jump through, especially if there’s grant funding involved.

For example, a trail extension the Trails Alliance is helping with along Ky. 2168 is funded with a grant received in 2015. But the soonest it could possibly be done is summer of 2019.

“There is so much bureaucracy that has to happen, because it’s federal money and state money,” she said. “So there’s checklist after checklist, there’s study after study — which is good because it is public money, so we want to be good stewards of that. But the flipside of that is it takes really long to move the construction and design.”

The Trails Alliance has eight trail projects on its list currently. At the top of the alliance’s priority list is completion of a trail between Stanford Road and the East Main Street pond. That trail will extend an existing trail that runs from the area of Third Street/Fourth Street/Hustonville Road through Batewood Park and along Clarks Run to Stanford Road. It’s currently delayed because of some grading issues that have to be worked out, Kirchner said.

Because grants can slow down the process so much, Kirchner said the Trails Alliance is trying to find private funding, especially from local sources, that can allow progress at a faster clip.

Almost one in three survey respondents said building a new community or recreation center should be a high priority. Drake said for him, such a facility is No. 2 in his mind, right after building an aquatic center.

The Bunny Davis facility comes up short compared to what residents want for recreation space, he said.

“It wasn’t really designed as a recreation facility per se,” he said. “There are limited programming elements that we can use this facility for.”

Drake said if Danville-Boyle County wants to pursue a new recreation facility, leaders should investigate how facilities in other places such as Woodford and Scott counties have been successful with multi-use gymnasiums.

Drake suggested warehouses and industrial facilities no longer being used by businesses are potential targets for turning into multi-use gym spaces by local governments. Those facilities work well, but often private, for-profit businesses can’t make them work, he said. “When private business goes in to make that a venue for these types of facilities, they are very difficult to sustain on user fees.”

Adding gym space would help address a problem Parks & Rec is facing this coming fiscal year: a reduction in the number of available gyms from local school districts for things like basketball leagues, he said.

Drake said governments must be prepared to shell out the cost for proper maintenance of any new facilities they decide to build or open.

“All of this stuff could be given to them, but if we aren’t prepared to maintain them, they will quickly disappear,” he said.

Acquiring the space to build facilities correctly is also important, he added.

“Buying land to do some of those other things is as important as doing those other things,” he said. “If we try to do those things and squeeze them in (to Millennium Park) … we’ll ruin what we’ve already got.”