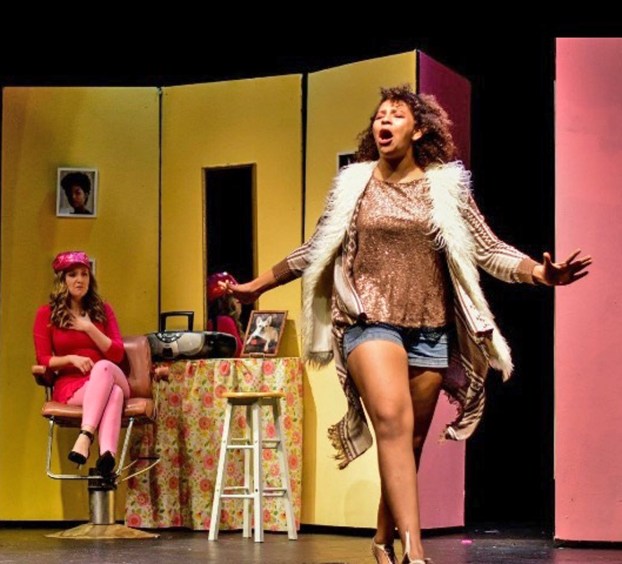 From Our Schools: Wray, Wood

“It was like running into a tornado the very first day. I mean, I thought I knew what I was doing as a teacher, then I met Alyssa.”

Who knew from Dr. Frieda Gebert’s initial encounter with this seventh grader that she would eventually be one of the former college professor’s most talented and reliable high school performers.

Junior Alyssa Wray has spent the past five years developing her talents on stage with Gebert’s guidance, but her interest in theater began many years earlier. As a kindergartener, she performed a minor role in a community play. “I first did a show, The Lion the Witch and the Wardrobe, when I was six-years-old. It was at Ragged Edge Community Theater, and I played the deer.”

Although the play created a spark of interest, Wray had other hobbies including basketball that drew her attention throughout elementary school. However, in middle school her interests shifted. “When Mrs. Gebert came in seventh grade to Boyle County, she started opening up more doors for me in theater.”

Gebert proved to be an important catalyst in Wray’s movement to the stage. The more productions that Gebert directed, the more Wray wanted to involve herself. “She was doing more shows for the drama department and that made me want to get back into theater. This allowed me to do theater more full time. So I quit basketball, and now I do about six or seven shows a year.”

Obviously, theater has now become an integral part of Wray’s life. “If I didn’t have theater in my life, I would probably be doing nothing. Theater is what pushes me to do better in school. I want to make it somewhere someday with it.”

“Without theater I would be the biggest procrastinator. Because that is where I spend most of my time every week.”

In school productions for which she has participated, Wray has earned a major role in each of them since she began taking drama. Other intangibles such as an incredible singing voice and dramatic personality have helped her achieve on stage.

What might be surprising to learn from this big on-stage personality is that Wray considers herself rather coy. “A lot of people know me as a really confident person. I’m really loud, but honestly I am kind of a shy person.” 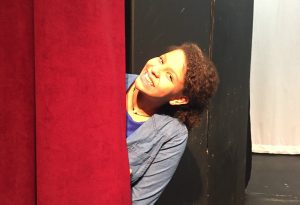 Alyssa Wray’s talents are thoroughly believed in by Frieda Gebert, director of the theater program. “Just watch her and see how a real rising young professional does it.” Photo by Mackenzie Stearman

“I may be a shy person, but when I am on stage, it is like being in a whole different world where you can be whatever character you are playing.” Even though Wray appears outwardly confident through her characters, she is just like the majority of teenagers who struggle with insecurity in their daily lives.

However, she continues to grow from her theater experiences and is gradually developing more self-confidence. “I want people to see me being confident and being nice and I want that to push them to chase their dreams or to be nice to other people.”

“If I see someone in theater class and they seem alone, then I want to say “Hi” and make them feel important. Theater has made me feel important, and I know that some of the people that go to this school don’t have that.”

Wray will be leading the way in the high school’s spring musical “Sister Act”. The play will be held at Ragged Edge Community Theater on May 3 and 4.

The man behind camera and computer

Senior Gary Wood began attending Boyle County High School midway through his sophomore year when he was placed in a yearbook class that required him to quickly learn new software applications. Who knew that this random course would spark his first interest in media.

As any regular student entering a new class, Wood had lots to learn. Yearbook teacher Damian Laymon shares, “He was an average student technologically speaking, but very outgoing with a lot of energy.”

Wood’s energy drove him to want to learn more about his new interest. The basics of Photoshop were taught to all students, but Wood found himself hooked, wanting to learn more. He began to spend extra time with Photoshop outside of class where he also became acquainted with Premier, a video editing program.

Entering his senior year, Wood enrolled in the web journalism class that focuses on writing and communication through the use of technology. Wood was assigned the role of website manager. Wood explains, “This role helped me focus on my strengths with Photoshop because it gave me time to edit the website and make it better.”

Towards the end of the semester, well-known local sports writer Larry Vaught visited the classroom as a guest speaker. Wood and his classmates learned much about this very busy man who has made connections throughout the state. 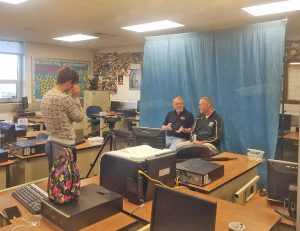 Vaught shared that after completing his work of 41 years for The Advocate-Messenger, he now covers UK sports on his online blog vaughtsviews.com and through many other media outlets. In addition, Lexington’s news station WLEX 18 showcases not only his articles, but also the videos he develops.

Near the end of class, Vaught’s conversation turned into a question for teacher Michelle Feistritzer. He was looking for a student capable and willing to assist him in recording and editing his videos. Feistritzer immediately had someone in mind.

She approached Wood with hopes that he would be eager to take on this challenge, and he was. “When Coach Fei came and asked me if I was interested, I was super excited because I knew it would build my profile and further develop my knowledge on video editing.”

Soon thereafter, Wood began further exercising his knowledge with media. Vaught and Wood now meet weekly to record videos at school and other locations. Returning to school, Wood then edits the videos to make them available for news station. “Every week, Larry puts up a video for LEX18 mostly about UK sports. I record and edit the videos and then send them in to LEX18 so they can post them to their website”, Wood explains.

“Often times I get to work with Larry on days I don’t expect to. Sometimes we even meet after school somewhere in town. I really do enjoy it.”

Wood’s commitment has often trumped weather conditions. “Even if we have snow days, I’ve actually had to go out and take videos. I enjoy that, it gives me something to do and it gives me more time to edit.”

Learning more about UK sports and the ‘behind the scenes’ details has also been rewarding. “I learn more in advance than most people, and it’s kind of interesting because I knew very little about UK sports.”

“I’m currently working on a video about Shai Gilgeous-Alexander and how much of a surprise he’s been to the UK basketball team and how much of an impact he had made throughout the NCAA tournament.”

Even though he understands his preparation alluded to this opportunity, Wood humbly recognizes Feistritzer for getting him involved with Vaught.

“I wouldn’t say the media classes got me involved with Vaught, I would say Coach Fei got me involved. She’s the one who introduced me to him and we just hit it off. She knew I had the ability to edit videos, so that’s how I got involved with Larry and it’s been awesome ever since.”

Wood describes his opportunity with Vaught as much more than a simple internship. “This is such a great opportunity working with Larry. Yes, I do consider it an internship, but I consider it more of a friendship. We’ve really gotten along and have gotten to know each other really well.”

As a result of working with Vaught, Wood has gained knowledge beyond the media realm. “I’ve really had to focus on problem solving because what I do involves lots of technology and technology is never perfect.”

In addition, Wood has also improved in other areas. “My communication skills have definitely improved. With Larry, I don’t see him every day, so I really have to work on letting him know when I’m available. This has really helped me see that in the future I am not always going to be with people I work with every single day. I have to learn to reach out”

In college and later in the workplace, Wood plans to use this new knowledge to his benefit. “I don’t really plan to go into a major that involves media. I plan to go into communications.

Working with Larry has really broadened my perspective by getting to know, meet, and talk to new people.”

Wood proves that when preparation and opportunity collide, amazing things can happen.

Nearly $7,000 authorized to fund 18 projects The Board of Directors for the Danville Schools Education Foundation has awarded 18... read more