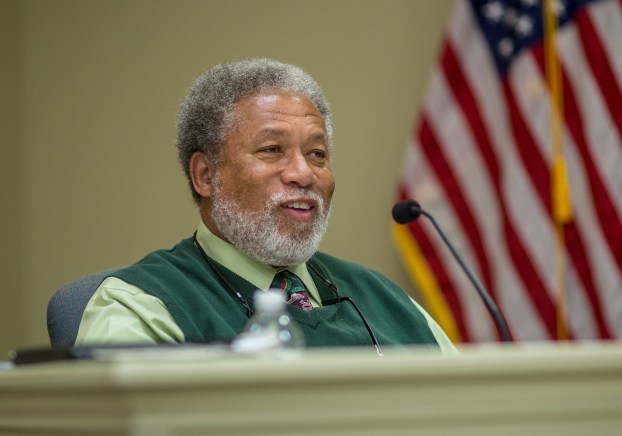 (Photo by Ben Kleppinger) Danville City Commissioner J.H. Atkins said new photos of condemned properties around Danville made it clear the properties are dangerous and something needs to be done.

Danville will attempt to force foreclosure sales of six condemned properties in city limits. City officials will also begin working toward demolishing dangerous structures on some of those properties on a case-by-case basis.

The move is the city commission’s attempt to put a stop to the costs of “nuisance” properties that continually rack up mowing and maintenance liens, and to “send a signal” about how the city will deal with nuisance properties going forward, Danville Mayor Mike Perros said Monday night.

Many of the properties have been condemned for years, and most have thousands of dollars in liens on them, placed by the city for work done.

“I want to thank you for the work that someone did endangering themselves to get these pictures for us,” Commissioner J.H. Atkins said. “They really are convincing as to why we need to take them down.”

The commission did not authorize any action against a seventh property, 222 E. Martin Luther King Boulevard, because City Manager Ron Scott said there is a potential that the owner will clean up the property instead.

“Codes would recommend waiting on this property till after a May 30 meeting with Neil Gregory and family members to try and resolve the property,” according to a report on the properties. “Demolition or sale of the property will be discussed and the liens on the property.”

The city intends to move toward demolition of condemned structures on the six properties on a case-by-case basis. City Attorney Stephen Dexter said the commission doesn’t have to authorize condemnation proceedings because the city already has a budget allocation for demolishing condemned structures and doing so is within the city manager’s authority. 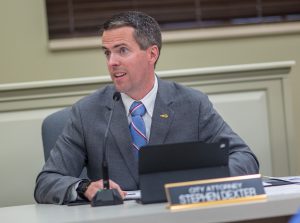 (Photo by Ben Kleppinger)
Danville City Attorney Stephen Dexter said the city manager has the authority to proceed with demolition of condemned structures since the city’s budget already provides funding for such activity; but any demolition plans would likely be brought before the city commission first to keep commissioners in the loop.

However, before demolitions move forward, they likely will be brought before the city commission again for review so commissioners are made aware of what’s going on and have an opportunity to object, he said.

One demolition the city is pursuing first is at 702 Perkins Ave.

The house has been completely gutted and the city has previously boarded it up because it poses a danger to the area around it; it may even be in imminent danger of collapse, officials said Monday night.

Three of the properties have already been demolished by the city and are now vacant lots. On the other properties, Dexter said the city can pursue foreclosures at the same time as it pursues demolition of condemned structures.

Dexter said the move would create no such precedent.

“Staff goes beyond the call of duty in trying to negotiate with current owners to some amicable end. That’s why you see some structures that have been on this list for decades,” Dexter said. “So I don’t think you’re making a policy shift, other than you’re saying, ‘let’s don’t let these stay on the list that long trying to work something out.’ That is maybe a policy shift, but as far as saying structures have to be demolished prior to them being sold, I don’t think you’re agreeing to that. We’ve done the direct opposite of that on a number of occasions.”

Perros said forcing foreclosure sales, which have the effect of wiping out all the existing liens on a property, is essentially the only way “to get it into good hands” and get the property maintained privately or even redeveloped.

“What you won’t be able to weigh now but you will in years to come is the ripple effect that may materialize in the community for those individuals who may not upkeep their property to code,” Dexter said.

“Yeah, by us not sending that signal — that’s what’s gotten us in this condition anyway,” Perros said.

Master and apprentice: Deem, Hasty on opposite sides at Boyle County, Lincoln County