The Amish Cook: Rosanna Bauman fills in for Gloria, shares importance of gardening 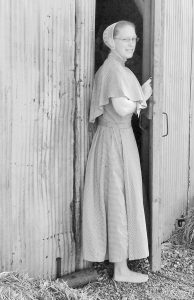 Editor’s Note: Gloria is off this week due to some ill kids. She will return next week. In the meantime, Rosanna Bauman was kind enough to fill in. Rosanna (pictured) is German Baptist Brethren and lives in rural Kansas. She, age 29, is a farmer and writer. The Brethren dress plainly like the Amish but are a bit more progressive when it comes to technology and photography Enjoy! – Kevin Williams, editor

It’s almost perfect: a little warmth from the dying sun still hits my cheek, a soft breeze floats around me on its lazy way northward, and my hands are full of dark loamy soil. Plus one earthworm. Long at last, we’re in the garden, getting dirt under our nails! A good dose of sun-warmed soil is the best antidote for spring fever! But our therapy session has hit a snafu: seed depth and density. For some reason, this is a very personal subject. “If we plant the onion sets only halfway up the bulb, they’ll pull much easier” Joanna states, as she pokes them in. “No,” Frank corrects her, “The soil will dry out too fast and the plant will die if it isn’t planted deep.” The problem is, they’re both right. I smartly decide to stay away from the controversial ground of seed depth and just cover the furrows after the hole has been dug and the seeds placed. I’m quite expertly putting the soft soil in first and leaving the clumps behind, creating a nice little depression to hold the water, when my method gets challenged. “Crumble the clumps and mix them in,” Joanna suggests. “More soil, more soil” Frank encourages and demonstrates by raking extra soil into a mound atop the seed, transforming my valley into a mountain.

It’s not just in this garden though, the problem is also found in the garden of our newlyweds! My brother Steven and Courtney are excitedly planting their first garden rather ambitiously with way more vegetables than two people will consume. Courtney is very experienced at produce production, having worked in a produce patch for more than five years. She has picked more tomatoes and washed more radishes than our entire family combined! A thrifty little housewife, she purchased some spindly seedlings on discount. These she planted extra deep, so that the plant’s roots will develop and the stem won’t break in our Kansas wind. Steven hasn’t spent much time gardening, but he’s planted thousands of acres of corn and beans and knows the importance of getting seeds to emerge. “Not so deep! Plants need sunlight, and we don’t want the stem to rot!”

Just why something as simple as planting a seed is so important to us, I’m not certain. Perhaps it’s because this is our future food supply, and we are each personally vested in it’s success. Not because it’s a life or death issue, but because, even in times of abundance, food is personal. Our gardens wouldn’t grow much at all if we kept looking at the bare facts of the best seed depth or density, because we would become hung up on the little details, that really isn’t the issue at all. We must recognize that each of us are an expert when it comes to our own food. The seeds that I plant shallow, may wither, and we will have less peas to pick. The corn that Frank packs in tightly and deep may struggle to break through the soil crust and make the harvest 10 days later. But it’s our food, and the most important thing is that we are involved in raising it, not that it’s done perfectly. I did notice that 25 percent of the shallow-planted onions died, though… 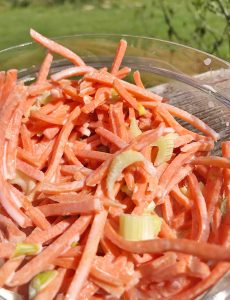 (kinda-like coleslaw, but it gives us something to do with all those carrots that mature at once!)

Toss together in a large bowl:

4 medium carrots, shredded (or super-small carrots that you thinned from the garden!)

Pour dressing over veggies, chill before serving (preferrably for 12 hours to allow flavors to blend)