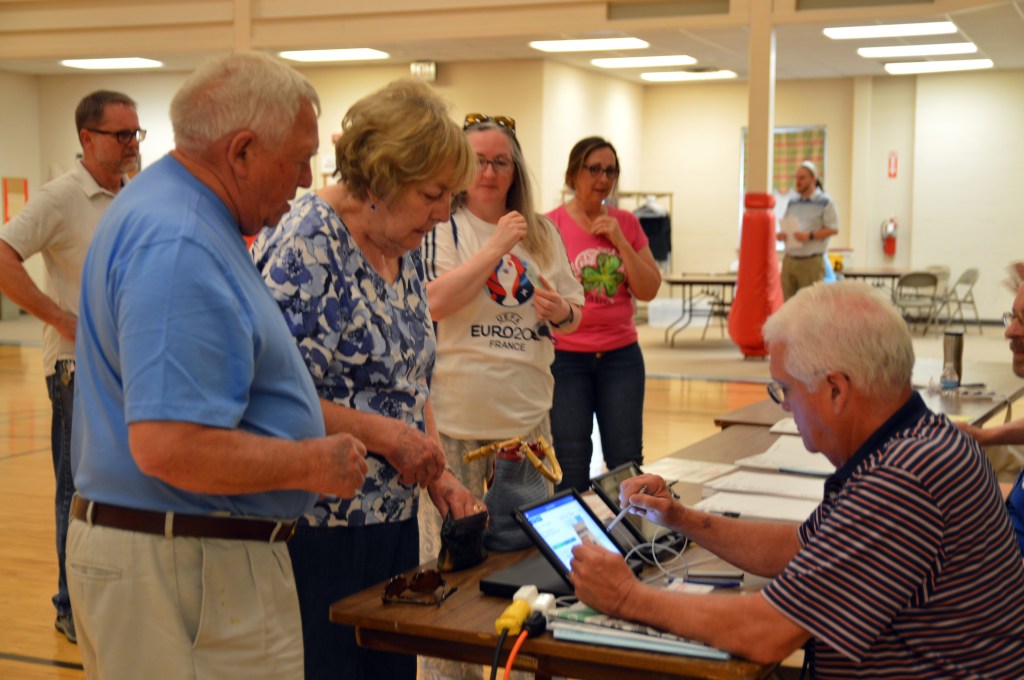 Bruce Nichols, Clerk of the Indian Hills precinct, uses the new check in concept to help a woman find her precinct. (Photo by Casey Craiger)

Six hours after the polls opened in Boyle County, an estimated 10-12 percent of registered voters in Danville, Perryville and Junction City had voted.

Steve Becker, a Boyle County election official in charge of the election at Perryville First Baptist Church, has worked seven elections prior to this one. “It’s been really steady so far, but I’ll be surprised if we hit 30 percent,” he said in regards to voter turnout Tuesday morning.

Similar stats were shared by officials at a Danville voting location. Bruce Nichols, clerk of the Indian Hills precinct, stated that turnout at First Baptist Church of Danville had been moderate. A big difference this year is the new technology in use, he said. 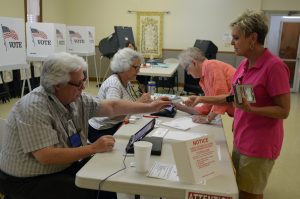 “The technology has been working very well so far as registering voters with the new concept,” he stated.

The new system scans the back of your license and identifies your voter information, as well as precinct for poll officers. It also keeps real-time statistics of what percentage of registered voters have voted within the county. Nichols noted that this new system is expected to save Kentucky hundreds of thousands of dollars and has decreased voter check-in time from three minutes to 30 seconds.

However, the new system has not been without flaws. “Our turnout has been slow and steady,” stated Kenneth Whitehouse, poll officer at Junction City First Baptist, “but we have had a technology issue we haven’t been able to resolve yet. However, it doesn’t affect very much and we’ll get it fixed.”