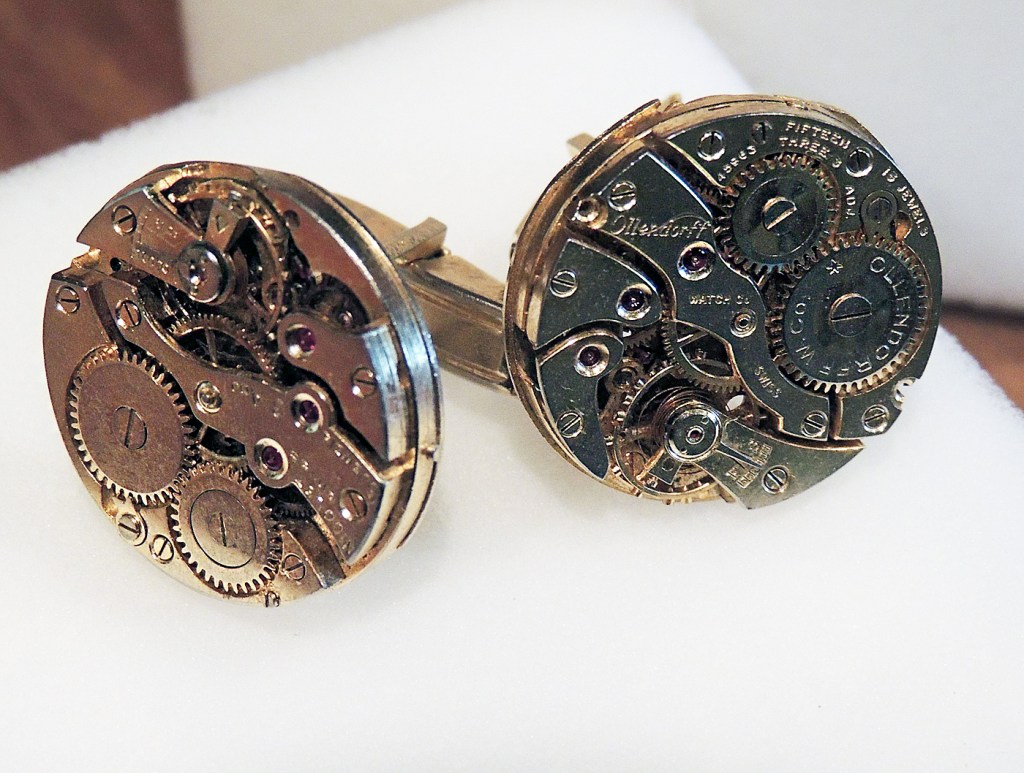 Question: Mr. Sampson I thought I would take the time to send you a query. I’ve worn cufflinks in my professional and private lives since I was a young man of 17. I have to say that this pair is one of my favorite, non-precious, cufflinks. They are made from watch movements. I think that the name is Ollendorff.

I was told that cufflinks are making a comeback. What would the value of this pair be? They are in excellent condition. Thank you for your time.

Answer: Cufflinks didn’t go away, they just quietly withdrew for a time. Yes, cufflinks are very popular, collectible and useable.

Today you can go into just about any mainstream store, like Macy’s or even T. J. Maxx and find nice shirts with cufflinks

Cufflinks have been around since the 1600s. At that time the visible parts of a man’s shirt were the cuffs, collar and the chest, which became canvases for adornments. These were usually adorned with ruffles, lace and ribbons.

Of course, poor men didn’t have to worry about such frippery. These expensive cuffs were detachable for laundering and for security. Yes, they were that valuable.

Originally, they were held in place with ribbon ties but in time, as fashion dictated, they became more decorative.

Your cufflinks are extra cool. For starters, not only are they links, but they have a great industrial chic or steam punk look about them. Steam punk is hot right now. Think Victorian with a high tech twist.

They are indeed watch movements that are gold filled and gold plated. So there is no scrap value to them. Made by the Ollendorff Company — an American company based in New York — it manufactured and imported watches from Switzerland. It was a nice quality company that made numerous brands and labels of watches.

Your cufflinks are not only Ollendorff old movements but were manufactured by Ollendorff. I think they date to the 1950s. It could be they were finding ways to utilize old stock.

Never the less, they are quite fetching. I imagine, being your cufflinks are so handsome and different from the more mundane links in the marketplace, they would have a price of about $40 for the pair. Thanks for sharing them with us.