Sarita Panchang, daughter of Vijay and Maya Panchang, and Kevin Smiley, son of Paul and Patricia Smiley were married on March 24, 2018 in Butler’s Courtyard in Houston, Texas.

The bride was escorted down the aisle by Rohit Bal, her maternal uncle. The maid of honor was Deepa Panchang, the bride’s sister. 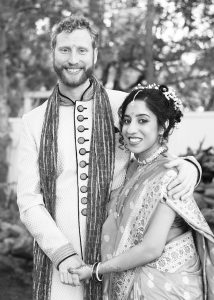 Best men were Owen and Eric Smiley, the groom’s brothers.

The bride is a 2006 graduate of clear Lake High School and received a bachelor of arts degree in 2010 from Rice University. She is currently a doctoral student in public health at the University of South Florida.